Petition: UCSC Dining Services: Join us in our boycott of Driscoll's Berries

by Students of UC Santa Cruz
We, as students of the University of California, Santa Cruz, stand with our fullest solidarity with the 450 Farm Workers from Burlington, Washington who are boycotting Driscoll’s Berries to obtain contracts from their employers. We stand in solidarity with the union Familias Unidas por La Justicia. Sign petition: https://www.change.org/p/uc-santa-cruz-dining-services-ucsc-dining-services-join-us-in-our-boycott-of-driscolls-berries 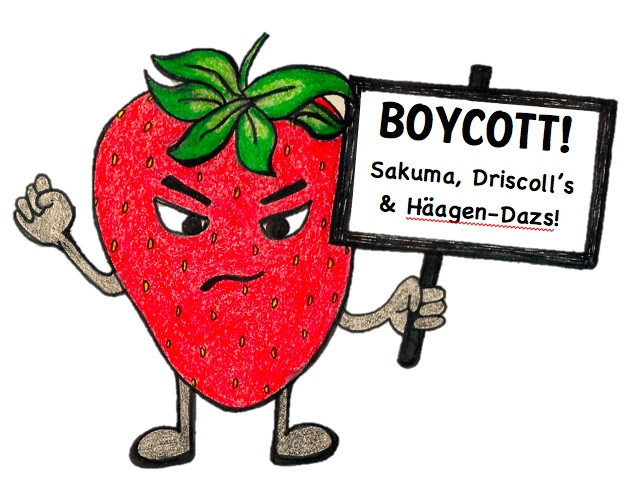 We support farm worker groups picking for Driscoll’s especially in their struggle and fight for union contracts.

For the last three years, farm worker members of Familias Unidas por la Justicia have been fighting for a union contract through the boycott of Driscoll’s Berries. As workers at Sakuma Berry Bros. Farms, the majority of berries they pick are sold under the Driscoll’s label. They call on Driscoll’s, the largest berry distributor in the world, to pressure Sakuma Berry Bros Farms into negotiating a contract with their workers. A union contract will provide farm workers with the stability and resources to work with dignity and push for broader transformations like ending pesticide use, establishing worker owned cooperatives, and higher wages.

Familias Unidas por la Justica stands in solidarity with the San Quintín union: El Sindicato Independiente Nacional Democrático de los Jornaleros Agrologías. This solidarity brings the boycott to the international level necessary to bring Driscoll’s to the negotiating table for both unions. Currently, farm workers in San Quintin are exposed to unfair labor conditions: supervisors yelling at workers and not giving them any type of break during their 10-12 hour shift, low wages (30 cents a pound compared to 50-70 cents a pound elsewhere), and security guards intensely patrolling the workers.

Such a refusal on the part of Driscoll’s Berries and Sakuma Bros. Berry Farms shows both parties’ failure to recognize the farm worker as a dignified valued workforce in the food system, and in doing so, continues the marginalization of migrant farm workers.

We are outraged that Driscoll’s and Sakuma Bros. Berry Farm have subjugated Farm Workers to such harsh working conditions, and do not take the demands of farm work into account. We are also in discontent at the fact that the University of California Santa Cruz continues to serve Driscoll's Berries in its dining halls despite the calls to boycott the berries from the farm workers.

We insist that the university stops purchasing Driscoll berries, and endorse the workers who have called for a boycott. In doing so, not only will the university show its respect and solidarity for farm workers, but for once, it would actually uphold the values that it supposedly stands for : The original authority on questioning authority.

We strongly believe “La Unión Hace la Fuerza” and stand in solidarity and support those fighting for justice with a community that has been historically marginalized by institutions. We recognize the importance for allies of migrant farm workers to support each other in the quest for just working conditions, and stand in solidarity with those who fight Driscoll’s for a union contract. Hasta La Victoria Siempre!

-Students of the University of California, Santa Cruz

This petition will be delivered to:
UC Santa Cruz Dining Services

Sign petition: https://www.change.org/p/uc-santa-cruz-dining-services-ucsc-dining-services-join-us-in-our-boycott-of-driscolls-berries
Add Your Comments
Support Independent Media
We are 100% volunteer and depend on your participation to sustain our efforts!