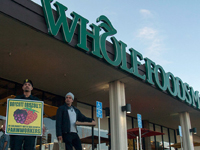 On February 26, demonstrators gathered at Whole Foods Market in Santa Cruz to protest Driscoll's, the largest berry distributor in the world with a history unjust labor practices and repression of union organizing. Founded in the Pajaro Valley in 1904, Driscoll's is a privately held company with headquarters in Watsonville. Production of Driscoll’s berries extends into 22 countries. Outside of the Whole Foods demonstration, Michael Joseph urged customers, "Don't buy Driscoll's berries until the farmworkers get the basic human rights they deserve!"

Workers who grow, harvest, and pack Driscoll’s lucrative berries are struggling against the systematic abuses they are forced to endure, and the companies profiting from the exploitation of their collective labor. Demonstrators say they support the farmworkers, including the boycott they initiated against Driscoll's, and cite poor working and living conditions, as well as growers refusing to negotiate with the workers' unions: Familias Unidas por la Justicia (FUJ) [Families United for Justice] in Washington State and the Sindicato Independiente Nacional Democrático de Jornaleros Agrícolas (SINDJA) [National Democratic Union of Independent Farmworkers] in Baja California. The union SINDJA is called La Alianza (The Alliance) for short.