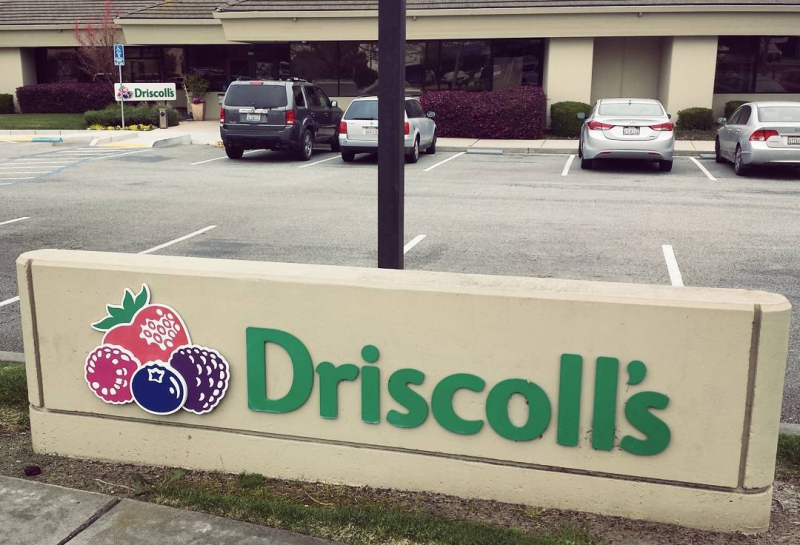 
Message from San Quintín to the United States: Boycott Driscoll’s

Driscoll's, with headquarters at 345 Westridge Drive in Watsonville, California, is the world's largest berry distributor and the target of an international boycott.

Besides providing fresh berries to customers around the world, Driscoll’s is often recognized for it's philanthropy and community involvement. However there is also a dark side to the colorful berry company.

Author and documentarian Tomás Madrigal explains that Driscoll's has a "notorious track record ... when it comes to fighting against farm worker campaigns for worker rights and dignity."

Farmworkers in Washington State who grow, harvest, and pack Driscoll’s lucrative berries formed a union, Familias Unidas por la Justicia (Families United for Justice), and initiated a boycott in 2013 against berries grown at Sakuma Brothers Farms in Burlington, Washington. Sakuma Brothers has been a berry grower for Driscoll’s for 25 years, and according to Families United for Justice the two companies have been closely intertwined over those years.

The call to boycott Driscoll’s was internationalized after a farmworker rebellion in the San Quintín Valley of Baja California, Mexico reached a boiling point in March 2015. The farmworkers, organized as an independent farmworker union called the Alianza de Organizaciones por la Justicia Social (Alliance of National, State and Municipal Organizations for Social Justice), released a communique that contained their grievances and a list of fourteen demands.

On April 8, 2015 the Alliance released a second communique that announced their resolve join Families United for Justice’s ongoing boycott against their employer, Sakuma Brothers Farms, by launching a "boycott against Driscoll’s and against the companies that make a profit based on the exploitation of our labor power."

On February 3, 2016, agricultural workers in San Quintín sent a message to the people of the United States. In the letter, the workers state there are "three levels of the Government in complicity with businessmen" and outline some of the ongoing labor abuses they are forced to endure "in exchange for keeping our jobs."

Farmworkers declare they have been imprisoned, as well as injured, and that "we have suffered reprisals, mass dismissals, constant threats in the fields, increased workload for the same salary, and are obligated to join corporate unions that have never represented us, in exchange for keeping our jobs, among other labor abuses."

The workers announced that a MEGA-MARCH, starting on March 17 in San Quintín, will make it's way through the Baja California towns of Maneadero, Ensenada, and Rosarito before arriving in Tijuana on March 19 for a reunion with organizations, activists, and unionists that support the struggle of farmworkers and their call to Boycott Driscoll's.

In addition to the mobilization in Baja California, called March of the two Californias, Families United for Justice will be "embarking on an historic 28-day tour of the West Coast to energize a major offensive on the boycott of Driscoll’s berries." The tour, which has about 17 scheduled events, begins on March 18 in Portland, Oregon, will march in Sacramento on March 26, then stop in the Bay Area, followed by southern California, including a big action at the US / Mexico Border on April 9, and conclude in the Bay Area on April 13. Families United also announced "a major action at the Driscoll's headquarters in Watsonville" on March 31.

On March 17, 2016, the first anniversary of the strike in San Quintín, farmworkers are asking their supporters "to join voices together ... in every corner of the USA to say: BOYCOTT DRISCOL's; to hold demonstrations in all Driscoll's warehouses and in supermarkets such as Costco, Walmart, Whole Foods, Safeway, or any place where Driscoll's products are sold."

Message from San Quintín to the United States

MESSAGE FROM SAN QUINTÍN TO THE UNITED STATES OF AMÉRICA

To the social organizations, sisters and brothers in the USA who have supported the struggle of San Quintín farmworkers, independent unions, scholars, activists, media workers:

Agricultural workers in the Valley of San Quintín, which rose in strike on March 17, 2015 to demand better working conditions invite you to support our struggle once more. We ask you to mobilize from different points of the state of California from March 17 to 20, 2016, to meet with thousands of workers conducting a MEGA-MARCH from San Quintín up to the border at Playas de Tijuana on March 20.

This MEGA-MARCH is to commemorate the first year of the start of the strike in San Quintín. To publicize that after a year from the historic work stoppage where thousands of workers left the camps and took to the streets demanding better working conditions, employers have not listened in good will to our demands and established measures to ensure our labor and human rights are respected in accordance with the law. On the contrary, we have been harshly repressed by the forces from the three levels of the Government in complicity with businessmen, we were imprisoned, injured, we have suffered reprisals, mass dismissals, constant threats in the fields, increased workload for the same salary, are obligated to join corporate unions that have never represented us, in exchange for keeping our jobs, among other labor abuses.

We ask your support for this day, March 17, to join our voices together with farmworkers of San Quintín, Mexico, in every corner of the USA to say: BOYCOTT DRISCOLL's; to hold demonstrations in all Driscoll's warehouses and in supermarkets such as Costco, Walmart, Whole Foods, Safeway, or any place where these products are sold. BOYCOTT DRISCOLL's because it purchases most of the fruits which are harvested in this Valley (strawberries, raspberries, blueberries, blackberries) and exploits just the same workers in the United States such as our sisters and brothers of "Familias Unidas" in Washington who have called to BOYCOTT DRISCOLL's since more than two years ago.

Support from trade unionists and activists of USA was important in a first major victory that resulted in the legal registration of our National Democratic Independent Union of Agricultural Workers (SINDJA), therefore we ask once more your support to demand corporations such as Driscoll's, and the companies that make up the Agricultural Council of Baja California as well as from each agricultural sector to sign a collective agreement with this unique union which legally represents workers of San Quintín, Mexico. United in the struggle we trust we can count on your support.

Alliance of National, State, and Municipal Organizations for Social Justice

For a better future and a new country!

* Credit to Enrique Davalos for the initial translation of the message from San Quintín to the United States.

Bradley Allen is a reporter and photographer in the Monterey Bay Area, and part of the Indybay collective. Follow him on Twitter: @BradleySA. 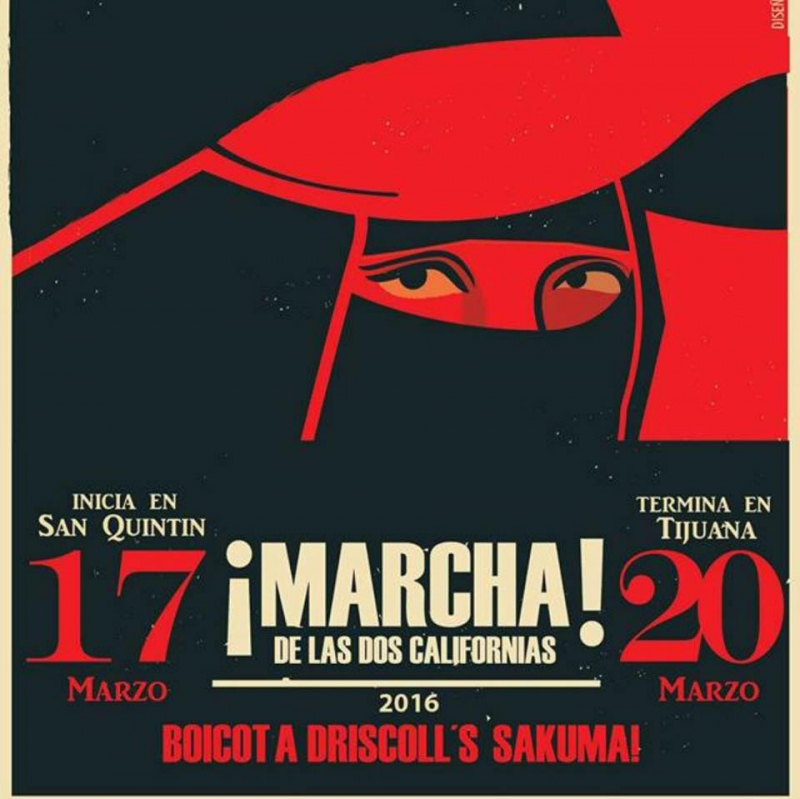 original image (960x959)
Graphic by Eduardo Chavez in support of the March of the two Californias starting on March 17 in San Quintín.
http://bradleyallen.net/2016/03/united-sta...
Add Your Comments
Support Independent Media
We are 100% volunteer and depend on your participation to sustain our efforts!