by Bradley Allen (bradley [at] bradleyallen.net)
Workers who grow, harvest, and pack Driscoll’s lucrative berries are struggling against the systematic abuses they are forced to endure, and the companies profiting from the exploitation of their collective labor. 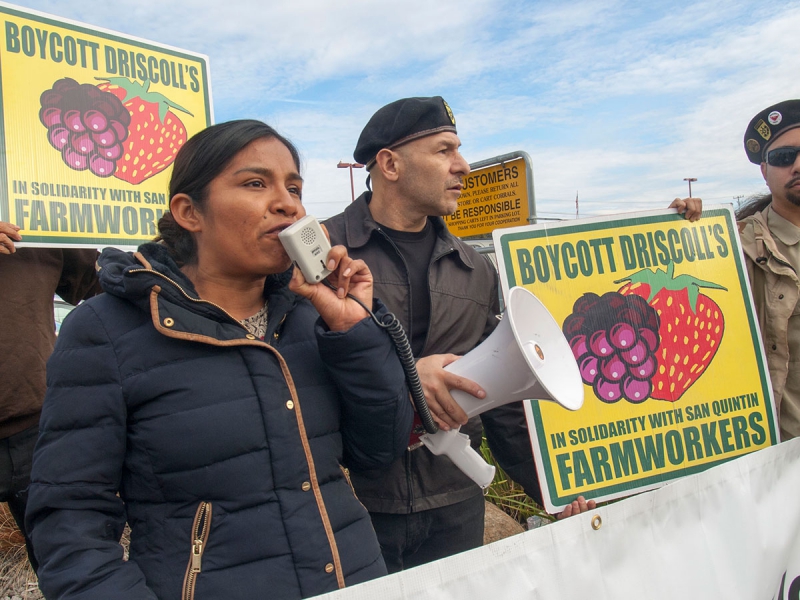 original image (1200x900)
[ Gloria Gracida, speaking on behalf of the Alliance of National, State and Municipal Organizations for Social Justice based in San Quintín, Baja California, informs shoppers at Mi Pueblo Market in Watsonville why they should boycott Driscoll's. ]

On January 2, a couple dozen people kicked off 2016 with a protest in Watsonville, where Driscoll's, the world's largest distributor of fresh berries, is both headquartered and first began producing strawberries in 1904. The demonstrators are amplifying a campaign initiated by farmworkers in Washington State and Baja California to boycott Driscoll's strawberries, blueberries, blackberries, and raspberries. Workers who grow, harvest, and pack the lucrative berries are struggling against the systematic abuses they are forced to endure, and the companies profiting from the exploitation of their collective labor.

On the website Káráni: Escribir o Volar, Tomás Madrigal documents the boycott launched by farmworkers in 2013 against berries grown at Sakuma Brothers Farms in Burlington, Washington. In response to the successful boycott against their brand, Sakuma Brothers shifted production in 2014 and began packing fresh market berries exclusively into Driscoll’s label cartons.

A portion of Driscoll’s website outlines the company's commitment to Worker Welfare Standards. Driscoll’s states that Sakuma Brothers has been an independent berry grower for Driscoll’s for 25 years. Driscoll’s maintains that they do "not have a direct role in any labor negotiations between growers and their farmworkers."

This claim by Driscoll’s is disingenuous. Madrigal, a childhood farmworker born in Walla Walla County, Washington, states the company has a "notorious track record ... when it comes to fighting against farm worker campaigns for worker rights and dignity." Worker campaigns at Driscoll’s subcontractors have taken place many times over the years, including in Santa Cruz County, Monterey County, and Ventura County in California, as well as in Washington State.

Driscoll’s says, "The majority of Driscoll’s berries are grown in the United States, with California being the largest growing region. Other growing regions in the U.S. include Oregon, Washington, New Jersey, North and South Carolina and Florida. Outside the U.S. Driscoll’s independent farmers grow berries in Canada, Mexico, Argentina, Chile, Australia, and in a variety of European countries." A tremendous amount of strawberries and raspberries are grown for Driscoll’s in Baja California, Mexico.

The intensity of the boycott grew beyond borders as a farmworker rebellion in the San Quintín Valley of Baja California reached a boiling point in March 2015. According to Free Speech Radio News, "When the strike first began on Tuesday, March 17th as many as half of the area’s 75 thousand farmworkers refused to show up to harvest the fruits and vegetables now ripe for export to U.S. markets."

Gloria Gracida attended the January 2, 2016 demonstration at Mi Pueblo Market on Freedom Boulevard in Watsonville, which sells the berries, and explained that contrary to claims made by Driscoll’s and its subcontractors, there are ongoing labor disputes with Driscoll’s growers in San Quintín over unfair wages and wage theft, mistreatment and sexual harassment in the workplace, and against the dependency upon child labor for production. Gracida, known as Maestra Gloria, was born in San Martín Peras, Oaxaca, and spoke on behalf of the Alianza de Organizaciones Nacionales, Estatales y Municipales para Justicia Social (the Alliance of National, State and Municipal Organizations for Social Justice) based in San Quintín.

As reported by Free Speech Radio News, "The vast majority of the farmworkers in the fields of San Quintin are indigenous migrant laborers from Mexico’s poorest states: Oaxaca, Chiapas and Guerrero. Their demands include raising the daily minimum wage to the equivalent of about $20, reducing the average workday from 12 to eight hours, payment of overtime for work performed on Sundays, the right to organize independent of the official unions and an end to rampant sexual abuse of women in the fields." 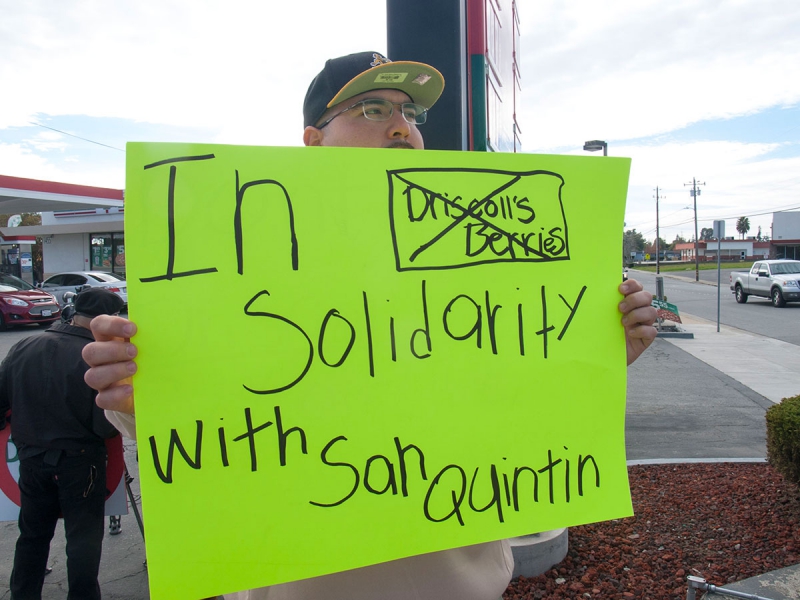 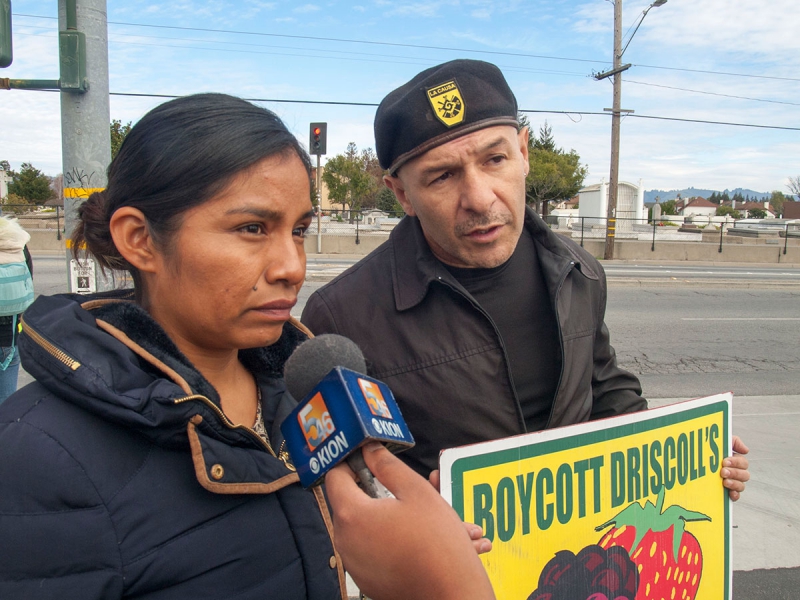 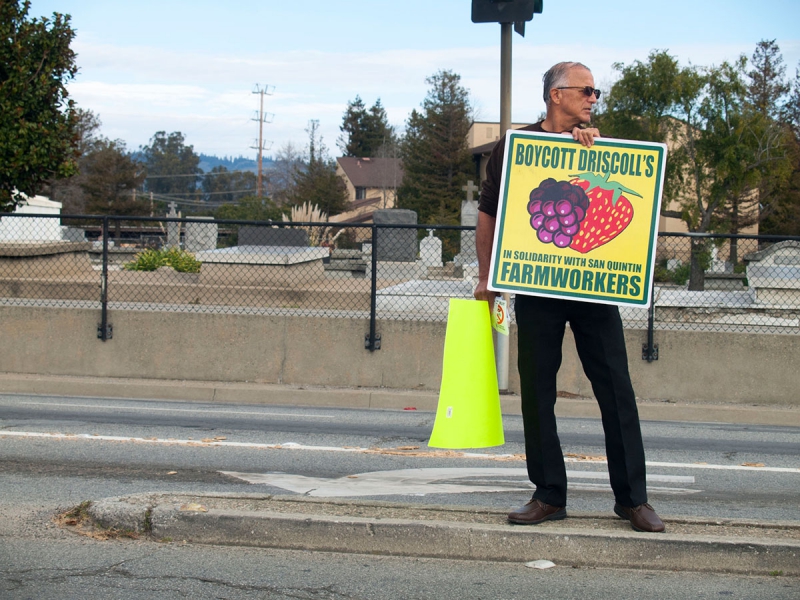 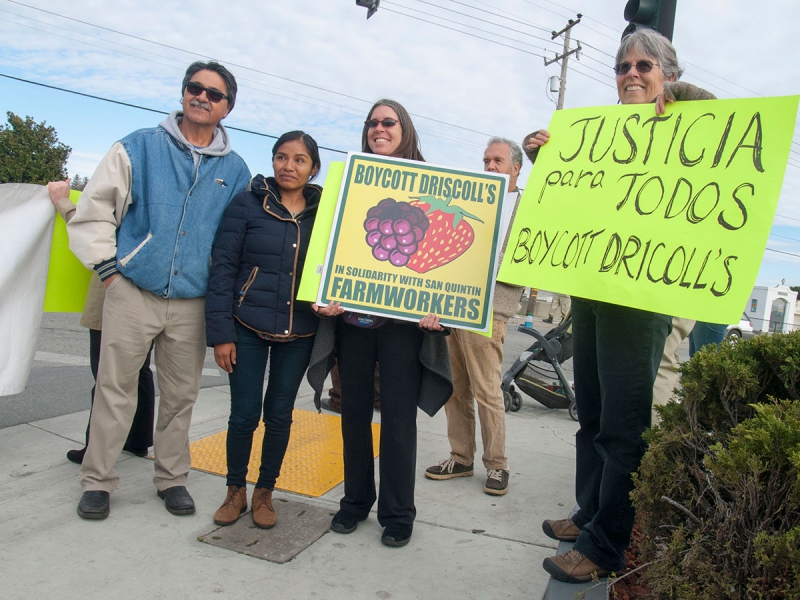 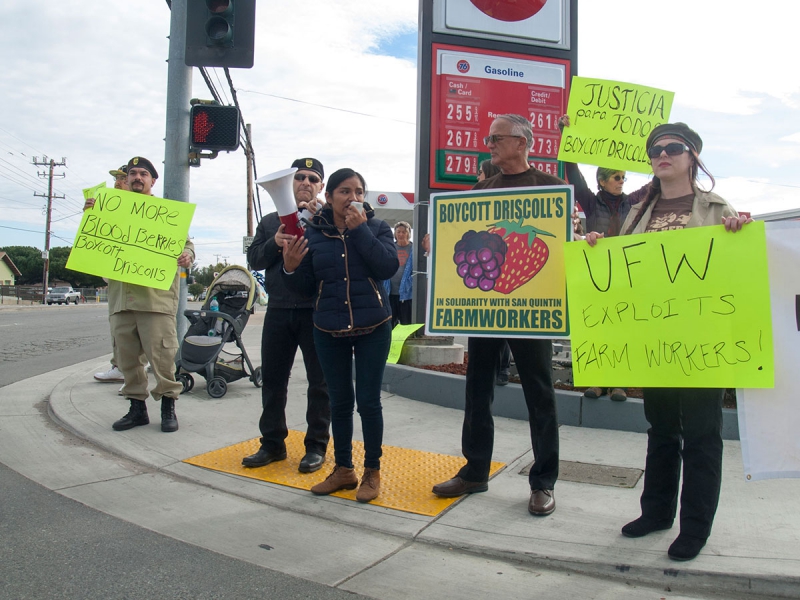 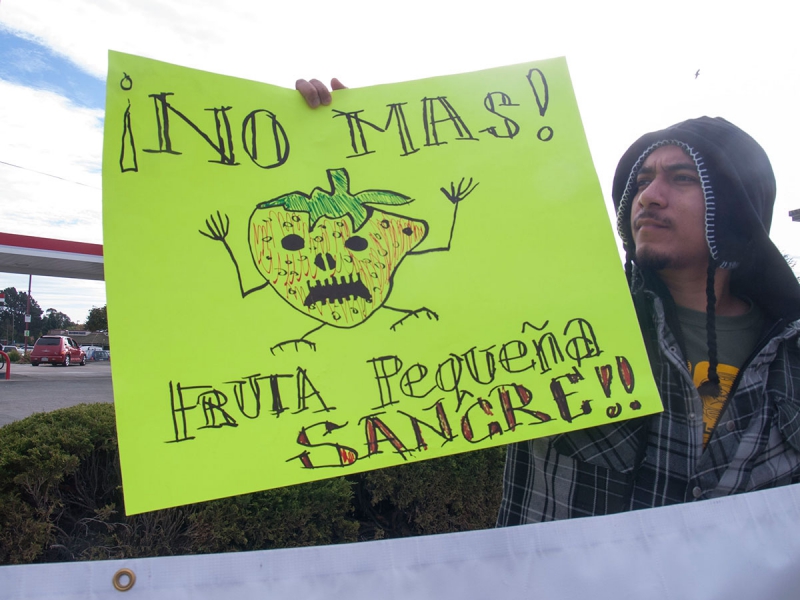 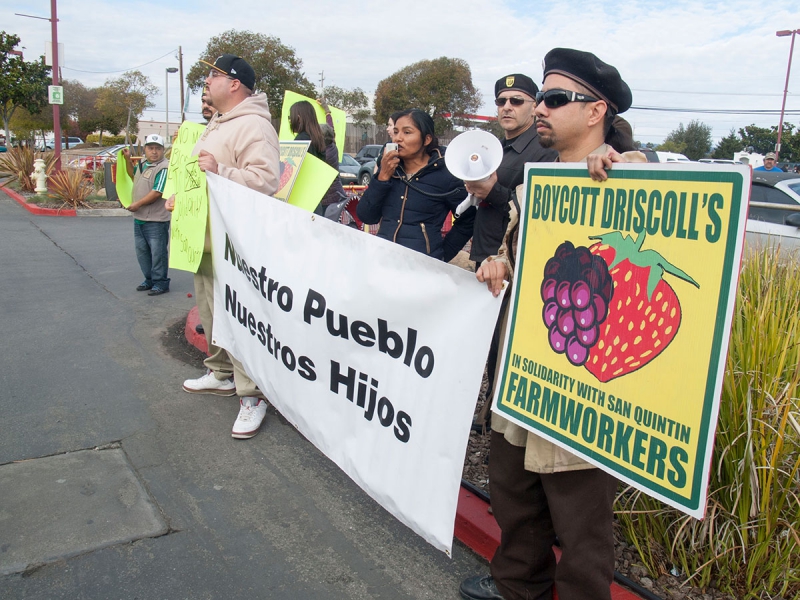 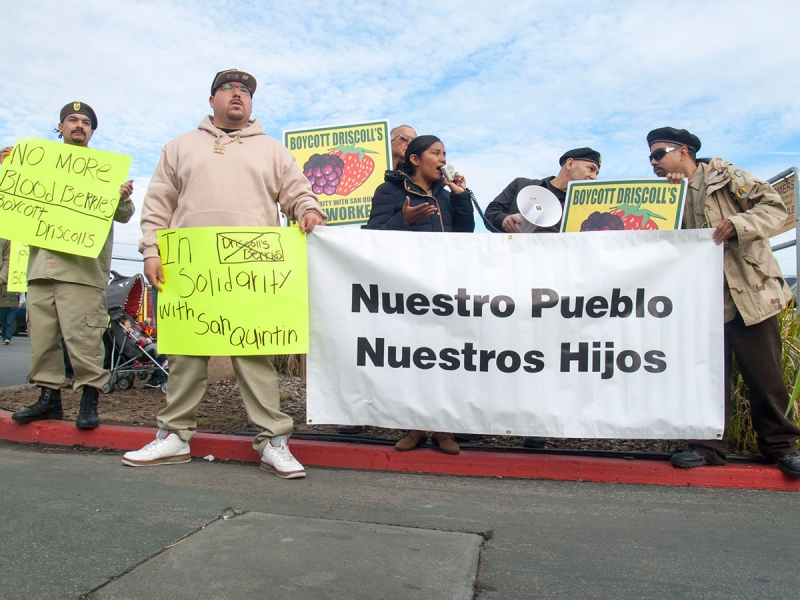 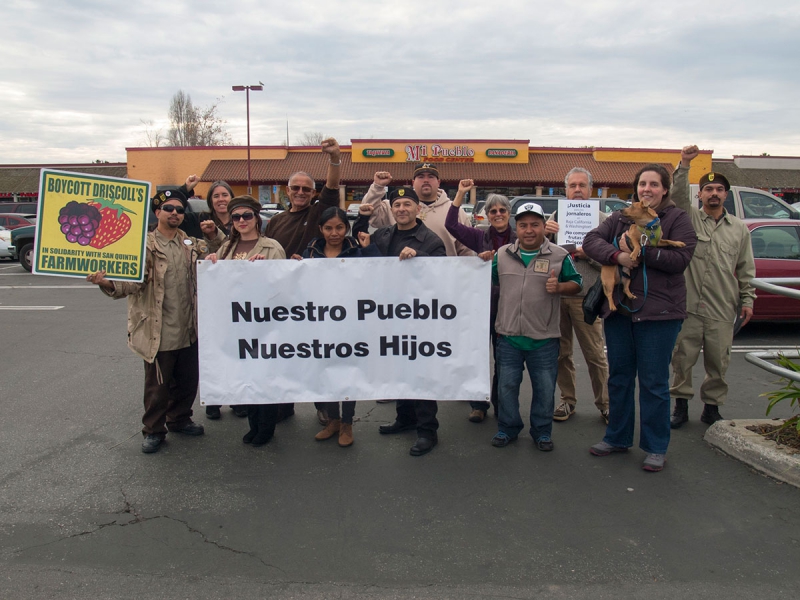 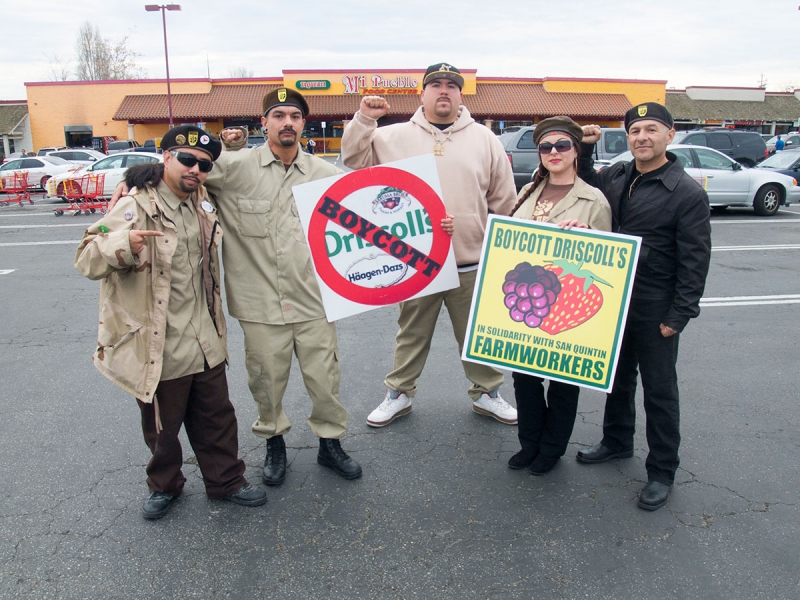 original image (1200x900)
END_OF_DOCUMENT_TOKEN_TO_BE_REPLACED
§VIDEO: Gloria Gracida, Alliance of National, State and Municipal Organizations for Social Justice
by Bradley Allen
Copy the code below to embed this movie into a web page:
Download Video (34.2MB) | Embed Video
“Boycott Driscoll’s! We call out from Watsonville to San Quintín, and from San Quintín to Watsonville, we say boycott Driscoll’s!”
END_OF_DOCUMENT_TOKEN_TO_BE_REPLACED
§Berry Boycott
by Bradley Allen 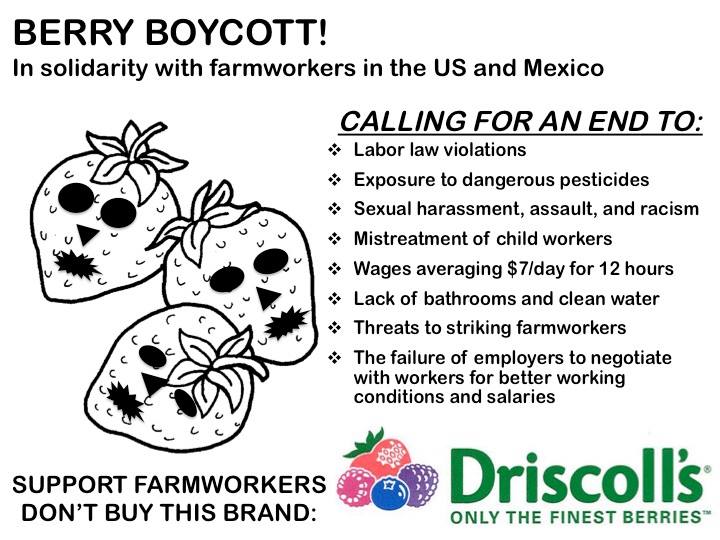 A flyer asks shoppers to boycott Driscoll’s in solidarity with farmworkers in the US and Mexico.
END_OF_DOCUMENT_TOKEN_TO_BE_REPLACED
Add Your Comments
Support Independent Media
We are 100% volunteer and depend on your participation to sustain our efforts!