Add an Event
Newswire
Calendar
Features
Home
Donate
From the Open-Publishing Calendar
From the Open-Publishing Newswire
Indybay Feature
Publish to Newswire
Add an Event
Related Categories: Santa Cruz Indymedia | Labor & Workers
Community Members in Watsonville Demonstrate in Support of Driscoll's Berry Boycott
by Alex Darocy (alex [at] alexdarocy.com)
Sunday Jan 3rd, 2016 8:16 PM
On January 2, community members in Watsonville picketed in front of the Mi Pueblo Food Center on Freedom Boulevard in support of the international boycott of Driscoll's Berries. The headquarters of Driscoll's Berries is located in Watsonville, and Mi Pueblo is a large chain supermarket that sells the brand. The action was organized by the Watsonville and Sacramento Brown Berets, who noted this was the first event organized for the Driscoll's boycott in Santa Cruz County. 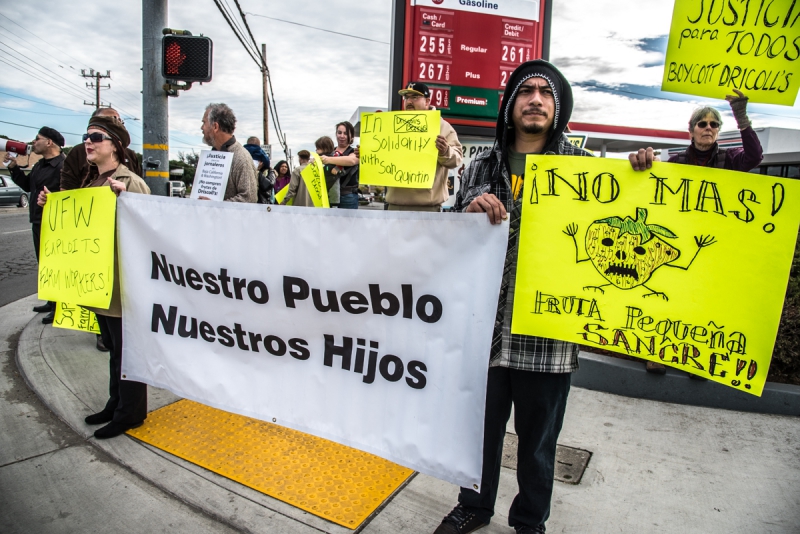 original image (1200x801)
According to organizers of the international boycott, Driscoll's is the largest distributor of berries in the world and the company has a history of repressing union organizing. The boycott of Driscoll's has been initiated in response to the poor treatment of farmworkers who grow their berries in San Quintin, Mexico, as well as at Sakuma Bros. Berry Farm in Burlington, Washington.

a- $15 per hour minimum wage and overtime pay.
b- IF a piece-rate wage process is accepted it must be negotiated as an ongoing process with worker representation- Sakuma Farms already agreed to a mutually acceptable process in 2013. The piece rate wage process has been used by Sakuma Farms as a wage theft mechanism that FUJ wants to end.
c- A medical plan for all harvesters paid for by the company.
d- No children or youth in the fields younger than 17 years.
e- Negotiate equitable hiring and firing practices.
f- A pesticide safety committee with union representation.
g- Union representation in the development of supervisor training program.
h- A union label on all harvested products.

In 2015 Families United for Justice issued a statement in support of individuals who grow berries in the San Quintin Valley of Mexico that are distributed by Driscoll's. A general strike was observed by over 50,000 San Quintin farmworkers that year. They organized as an independent union called the Alliance of National, State and Municipal Organizations for Social Justice. The farmworkers initially demanded their wages be increased to 300 pesos a day, but they lowered that figure to 200 pesos, which is about $13. Most of the workers earned $7 to $8 a day before the strike began.

"Farmworker families in both WA and Mexico are asking people to stop buying Driscoll's Berries until they have legally binding union contracts that ensure they have justice and dignity in the workplace. People all over North America are taking action in solidarity with this movement. Tell your local grocery store manager that you support the boycott and ask them to remove Driscoll's berries from their shelves," read a flyer handed out at the January 2 boycott demonstration in Watsonville.

In addition to being organized by the Watsonville and Sacramento Brown Berets, the action was sponsored by the Fresno Brown Berets, Labor Council for Latin American Advancement (Sacramento Chapter) AFL-CIO, SEIU 1021, Sacramento Central Labor Council AFL-CIO, Organization of Agricultural Workers California, First of May Civic Union, The Organizer, United Public Worker For Action, Women Take Back The Night. 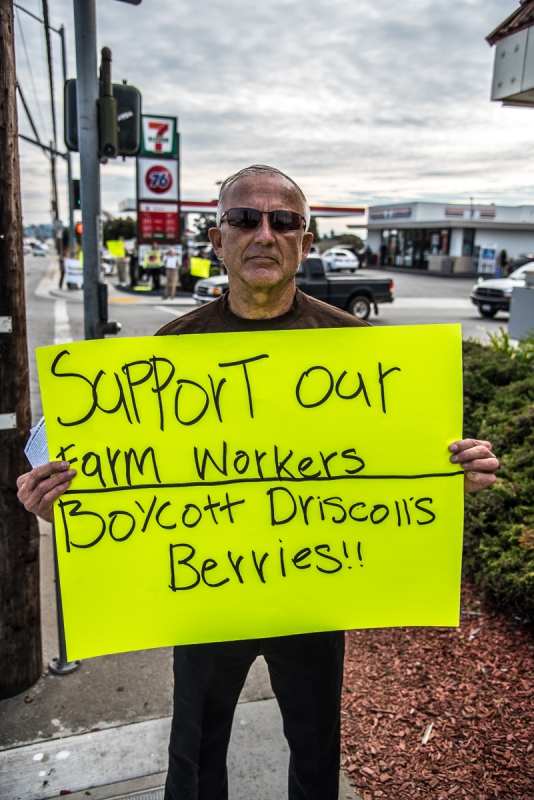 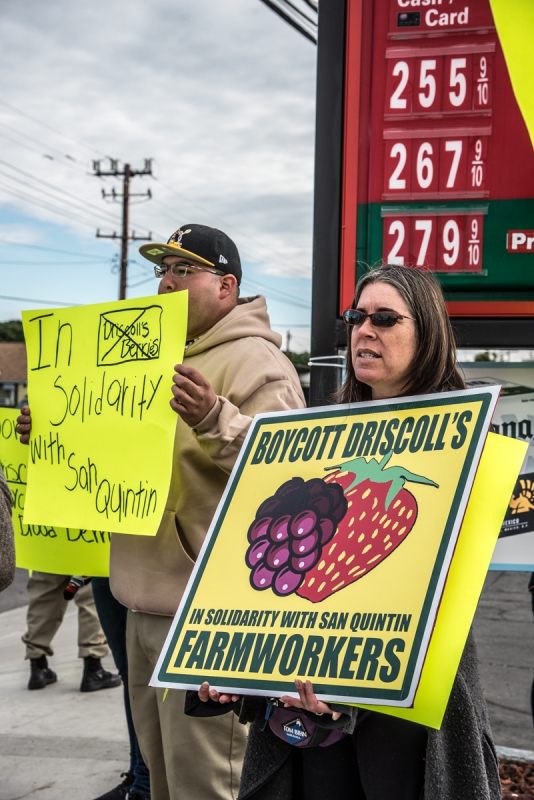 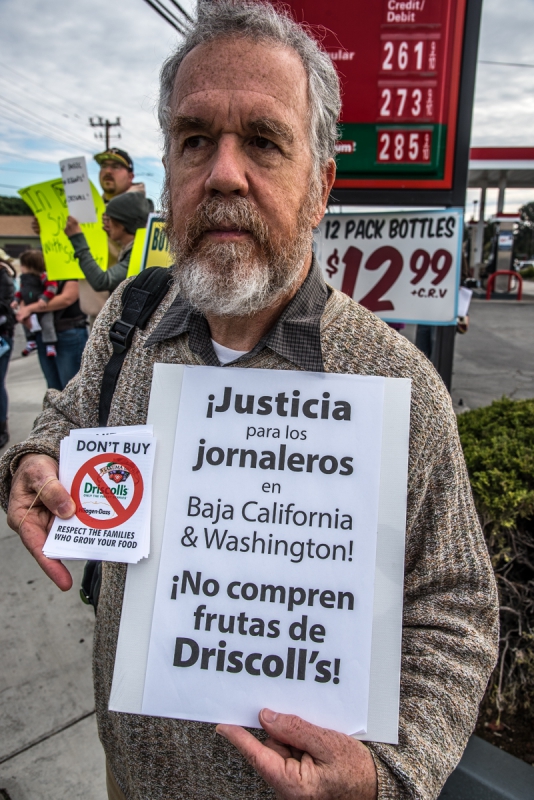 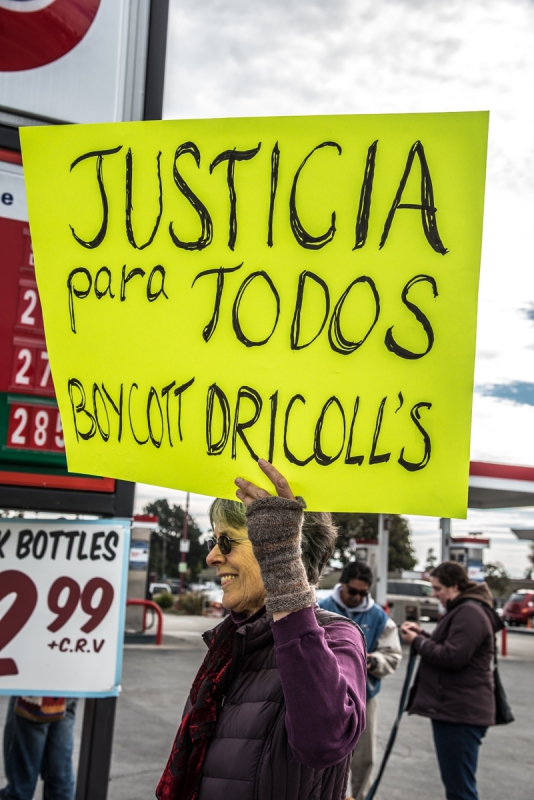 original image (801x1200)
Add Your Comments
Support Independent Media
We are 100% volunteer and depend on your participation to sustain our efforts!