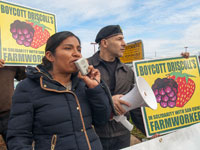 On January 2, a couple dozen people kicked off 2016 with a protest in Watsonville, where Driscoll's, the world's largest distributor of fresh berries, is both headquartered and first began producing strawberries in 1904. The demonstrators are amplifying a campaign initiated by farmworkers in Washington State and Baja California to boycott Driscoll's strawberries, blueberries, blackberries, and raspberries.

Workers who grow, harvest, and pack the lucrative berries are struggling against the systematic abuses they are forced to endure, and the companies profiting from the exploitation of their collective labor.

Gloria Gracida attended the demonstration, which was held at Mi Pueblo Market on Freedom Boulevard in Watsonville, a large chain supermarket which sells the berries. She explained that contrary to claims made by Driscoll’s and it's subcontractors, there are ongoing labor disputes with Driscoll’s growers in San Quintín over unfair wages and wage theft, mistreatment and sexual harassment in the workplace, and against the dependency upon child labor for production. Gracida, known as Maestra Gloria, was born in San Martín Peras, Oaxaca, and spoke on behalf of the Alianza de Organizaciones Nacionales, Estatales y Municipales para Justicia Social (the Alliance of National, State and Municipal Organizations for Social Justice) based in San Quintín.

Read More with Photos and Video: