by Bradley Allen (bradley [at] bradleyallen.net)
What is UFW (United Farm Workers) doing to support farmworkers fighting for justice in San Quintín, México and Washington state? Nothing. 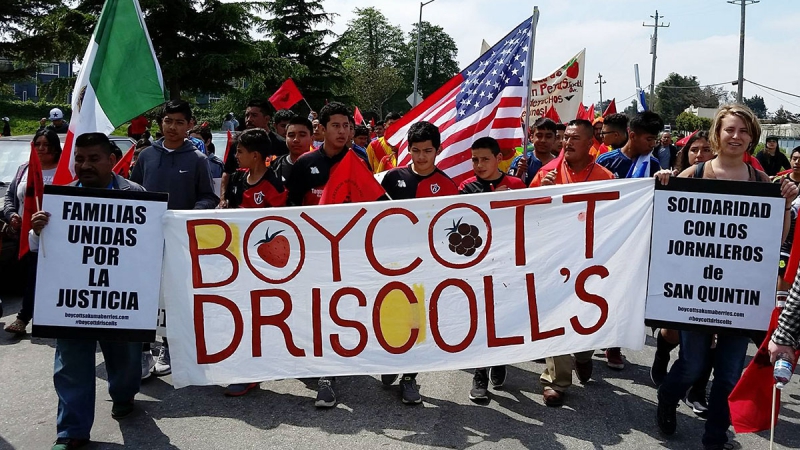 On Sunday, April 3, Michael Garcia and fellow Watsonville Brown Berets traveled a short distance to Salinas, California to attend the annual Cesar Chavez March and Rally presented by United Farm Workers (UFW). The Watsonville Brown Berets were joined by members of Familias Unidas por la Justicia (FUJ), an independent farmworker union in Burlington, Washington fighting for a union contract, and initiators of the boycott against Driscoll's.

The Watsonville Brown Berets (WBB) and FUJ activists spoke with people assembled at Cesar Chavez Community Park and handed out flyers about the growing movement to boycott Driscoll's, the world's largest berry distributor. FUJ, along with tens of thousands of farmworkers in San Quintín, México, are fighting to end wage theft and poverty wages, inhumane production standards, and retaliation from protected union activity.

Although advocating for farmworkers' rights seems like it would be warmly welcomed by UFW, that was unfortunately not the experience for WBB and FUJ members. Garcia, born and raised in Watsonville, noticed that his friend was working the stage and asked if his group could have some time later to speak about the Driscoll's boycott. Garcia's friend, who was both the owner of the stage and a mariachi musician performing at the event, agreed to provide Garcia time. The stage owner, however, was then reportedly approached by UFW representatives and specifically told that UFW does not want WBB or FUJ speaking from the stage.

Prior to parading through the streets of Salinas, Garcia enthusiastically approached UFW Regional Director Lauro Barajas and asked if it was OK if they carried their “Boycott Driscoll’s” banner towards the front of the march. Garcia was denied and then told that UFW did not want him to carry the banner at all during the march.

In an interview the next day at a cafe in Watsonville, Garcia, feeling disenchanted by UFW and their annual event, observed that, "In Salinas people were just worshipping and romanticizing the past and Cesar Chavez. There was nothing going on in the march speaking to contemporary issues, other than our signs calling for the Driscoll's boycott. It just seemed like one big UFW advertisement. The only thing they were advocating for was overtime in the fields." Garcia respects the community members of Salinas, but says UFW representatives are, "A bunch of sellouts making money by romanticizing off the past."

When FUJ boycott coordinator Andrew Eckels approached a UFW representative to ask permission to speak from the stage about the FUJ, Eckels was given the cold shoulder and completely ignored. Garcia reiterates, "The whole time we were there, we were treated like unwelcome guests."

While dialoging with Barajas after the march, Garcia asked, “What is the UFW doing right now for the San Quintín and Washington state farmworkers?”

Garcia says that Barajas, the UFW’s Regional Director, stuck his hand right in Garcia’s face and replied, “We’re doing a lot more than you think.”

To which Garcia interjected, "Yes, but specifically what are you doing for the Driscoll's boycott?"

“Nothing.” Barajas replied with a proud smirk.

The rally in the park continued after the march, and despite UFW’s wishes, the stage owner granted advocates of the Driscoll’s boycott a few minutes to address the crowd. FUJ member Lázaro Matamoros primarily spoke followed by closing words from FUJ boycott coordinator Andrew Eckels. This came after all the other organizational representatives had already spoken, and following a performance by the mariachi band. Still, UFW wanted nothing to do with farmworkers fighting for dignity and justice against Driscoll’s. Garcia recalls, “As soon as we started talking, the main UFW representative [Lauro Barajas, UFW Regional Director] started pulling out UFW flags from around the stage.”

Garcia states that overall, "The thing that made me feel most disconnected was to learn that the UFW representative specifically pointed our group out to the stage owner and said he did not want us on the stage."

UFW has left Larry Itliong and other Filipinos out of public narratives about the historic farmworkers' movement.

"It's very important getting him recognized for what he did," Johnny Itliong, Larry's son, told NBC News. "He didn't do it himself, but he initiated it all…How did Cesar Chavez become the founder of a union he was asked to join? That's on him for creating the fallacy, doesn't mean he didn't do any good. Just a matter of setting the record straight."

To this day, the UFW website's 'About Us' section continues to perpetuate the founder myth by stating, "As president of the United Farm Workers of America, Arturo S. Rodriguez is continuing to build the union Cesar Chavez founded ..."

UFW accepts sponsorship from corporations such as Chevron, Budweiser, Southern California Gas Co., AT&T, and Southwest Airlines. In addition to corporate sponsorships, the UFW has a history of silencing community members fighting for justice. During a grassroots protest called March Against Salinas Police Brutality on May 25, 2014, UFW organizers suppressed anti-police messages.

In a scathing critique published on May 19, 2014 exposing experiences working as an organizer for United Farm Workers, La Stephanie, an "Indigenous badass" writes:

"Ultimately, I cut my time at the union short because I couldn’t take it anymore. Being in the UFW was reminiscent of being back in an abusive home. As a child survivor of domestic violence, I make no qualms about calling abusive behavior out and my supervisor was ill-equipped to handle strong women. If you didn’t play the docile, well-behaved woman, it was as if you were speaking a language he didn’t understand. As a defense (because he felt threatened), my supervisor made me feel irrational for continuously bringing up the lack of women in the Union. He was also manipulative and sometimes controlling, at times asking where I was during my off time."

In conclusion, Garcia concedes, "I've known these things about the UFW for a while now, but it was upsetting to actually see it and experience it myself. The UFW has gone a long way since it's beginning, but unfortunately not for the better of the farmworkers they're supposed to be fighting for." 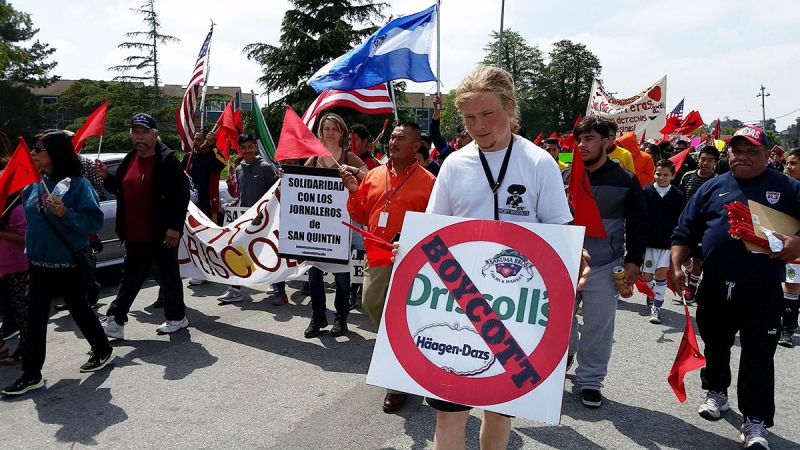 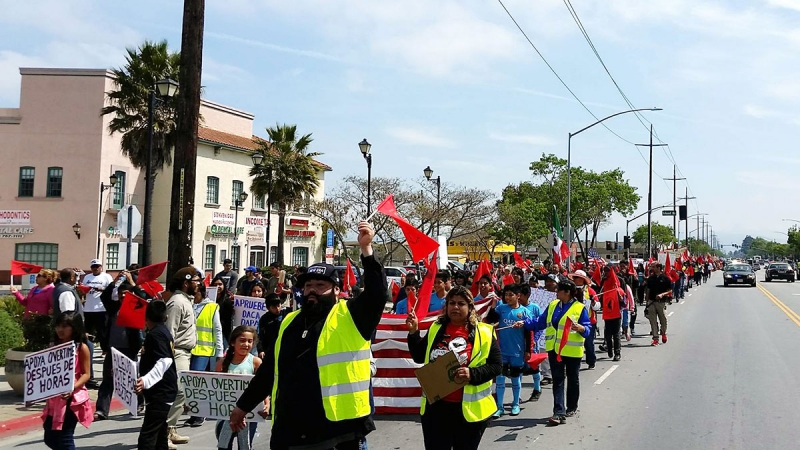 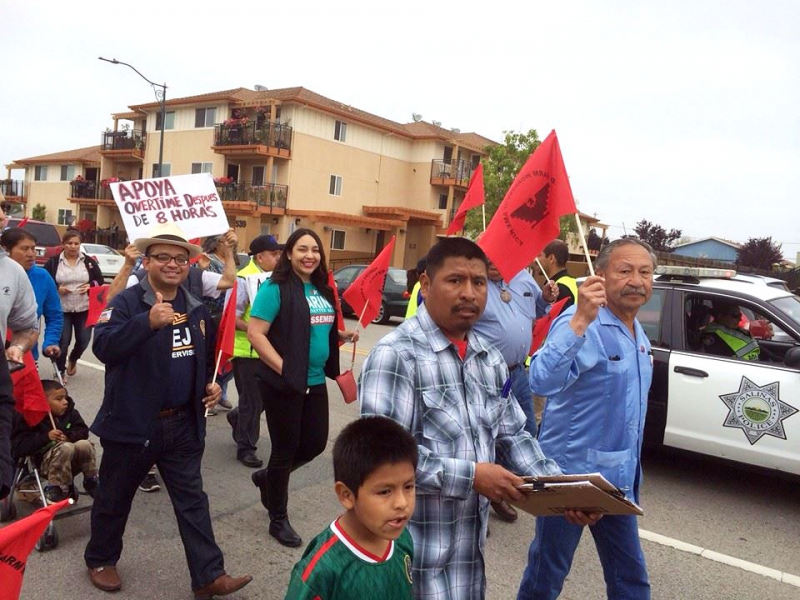 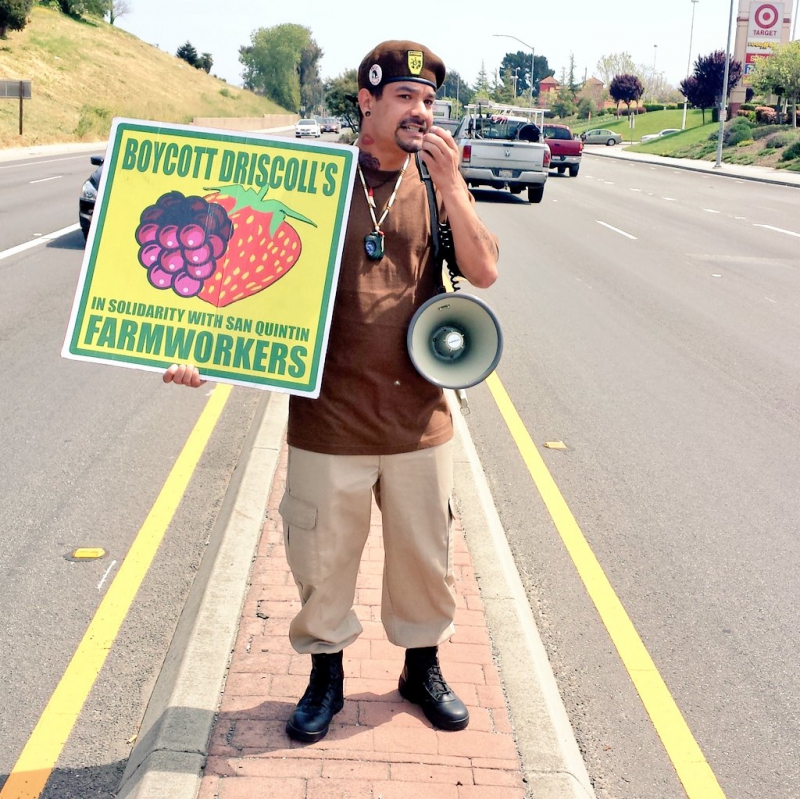 original image (1024x1023)
Michael Garcia of the Watsonville Brown Berets, standing on the median of Main Street in Watsonville, California, displays a sign advocating, “Boycott Driscoll’s In Solidarity with San Qunitín Farmworkers.” April 2, 2016. Photo by Bradley Allen.
END_OF_DOCUMENT_TOKEN_TO_BE_REPLACED
§Which Side Are You On?
by Bradley Allen
Copy the code below to embed this movie into a web page:
Download Video (42.4MB) | Embed Video
[ Video: 29 seconds, courtesy FUJ ]


Good afternoon friends. My name is Lázaro Matamoros. I come from the state of Washington. I was working at a company called Sakuma Bros. Well the company is treating people badly there in Washington state.

There we enter at five o’clock in the morning until four thirty in the afternoon. They do not give breaks or lunch. The people are working without breaks, without lunch. Empty stomachs are working there in the state of Washington, but we came here. I need your help, to be boycotting the fruit of Sakuma and Driscoll’s.

The same thing is happening with the workers in the San Quintín Valley of Baja California, Mexico. It is the same there. They are suffering like us in the state of Washington.

They do not give breaks or lunch either in the San Quintín Valley. The same company Driscoll’s. The Driscoll’s company is the largest (berry distributor) in the world.

But I need help. Boycott this company.

I thank all of you. Thank you very much.
END_OF_DOCUMENT_TOKEN_TO_BE_REPLACED
§United Farm Workers & Budweiser
by Bradley Allen 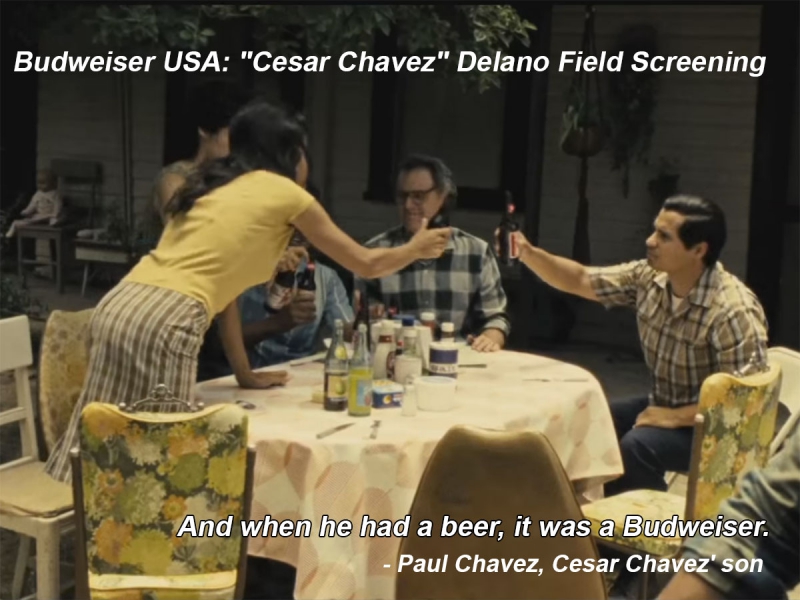 original image (1200x900)
Image from a video on YouTube published by Budweiser. The caption on YouTube reads: Watch as Budweiser hosts a field screening of the “Cesar Chavez” film in Delano for farm workers that were instrumental in the movement. Courtesy of www.budlight.com
END_OF_DOCUMENT_TOKEN_TO_BE_REPLACED
§United Farm Workers and Reiter Affiliated Companies (Driscoll’s)
by Bradley Allen 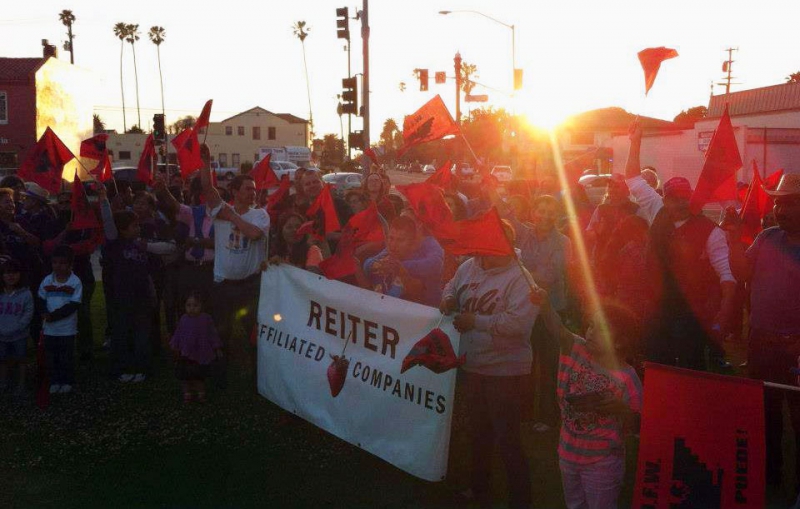 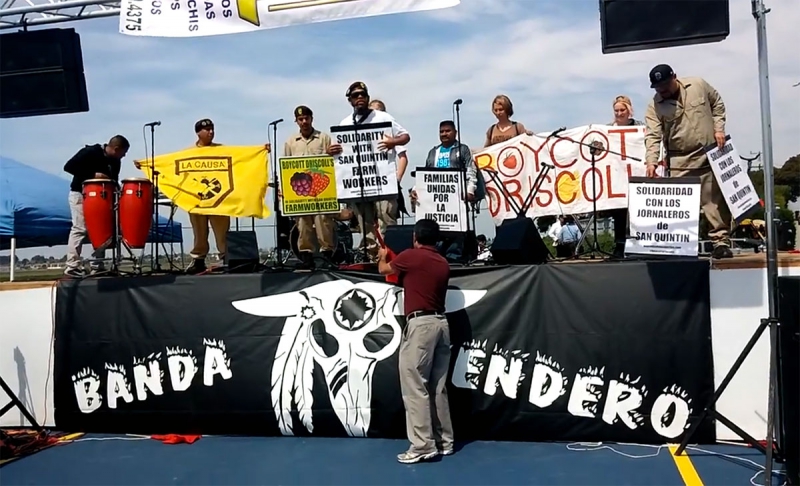 Randy Shaw's 2010 book "Beyond the Fields: Cesar Chavez, the UFW, and the Struggle for Justice in the 21st Century" outlines how Filipino workers began the Delano grape strike in 1965 which led to the creation of United Farm Workers Organizing Committee (UFWOC) in 1966 and then United Farm Workers of America (UFW) in 1972.

The Delano strike against grape growers was called by Filipino workers who were affiliated with the AFL-CIO-chartered Agricultural Workers Organizing Committee (AWOC). Filipinos were a minority of the primarily Mexican farm workforce and lacked the capacity to win a strike. Nevertheless, their decision to strike on September 8, 1965, forced Chavez and the NFWA to either join the struggle or appear to be turning their backs on workers. Chavez believed that it should be the workers' decision, and on September 16, Mexican Independence Day, a crowd of more that twelve hundred NFWA supporters and members filled the parish hall of Our Lady of Guadalupé Church [in San José] to decide whether to join the strike. The revolutionary spirit of the day led to chants of "Huelga! Huelga! Huelga!" and the great Delano grape strike--and the impetus for America's first successful national consumer boycott--began.

John Armington, now a lawyer, was ten-years old at the time of the 1965 strike. He recalled watching his father, Bob - a Filipino laborer - make the motion to strike in the meeting called by Itliong, then the head of the Agricultural Workers Organizing Committee (AFL-CIO).

"Larry Itliong yelled out to the packed hall, 'I want those in favor to stand up with your hand raised,'" Armington said. "Everyone in that hall stood up with their hands in the air. It was a unanimous decision to call a strike against the grape growers in Delano and vicinity."

That's when Chavez first heard about the Filipinos in the streets, according to Gilbert Padilla, who was co-founder with Chavez of the National Farm Workers Association (NFWA). Padilla said the NFWA wasn't a real union, and that all it could offer Itliong then was use of a mimeograph and some picketing help.

END_OF_DOCUMENT_TOKEN_TO_BE_REPLACED
§UFW & Driscoll’s: United To Exploit
by Bradley Allen
UFW & Driscoll’s: United To Exploit
Why won’t the United Farm Workers support the Driscoll’s Boycott?
https://www.indybay.org/newsitems/2016/05/31/18787095.php
END_OF_DOCUMENT_TOKEN_TO_BE_REPLACED
Add Your Comments
Latest Comments
Listed below are the latest comments about this post.
These comments are submitted anonymously by website visitors.
TITLE
AUTHOR
DATE
WHAT HAS HAPPENED TO THE UFW?
via Jesse Rojas
Who shows up?
John Cohen-Colby
Sellouts romanticizing the past.
G
Support Independent Media
We are 100% volunteer and depend on your participation to sustain our efforts!