by zh
Representatives from farmworker unions in Washington state and Baja California - citing abuses including wage theft, broken contracts, pesticide poisoning, and sexual harassment and coercion - led a march to the Watsonville headquarters of berry distributor Driscoll's, where they spoke out on their experiences as workers and demanded Driscoll's force growers to provide dignified working conditions. 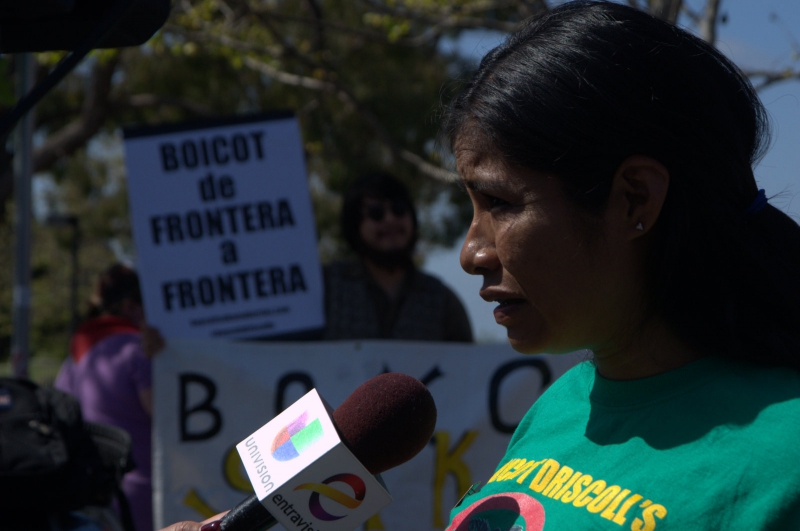 A loose circle of people, many dressed in green t-shirts bearing the message “Boycott Driscolls!”, stood around in an empty space in the parking lot shared by an Applebee's, a AAA, and Watsonville's Green Valley Cinema.

“Does anyone want to make a sign?” asked Michael of the Watsonville Brown Berets, carrying a bag of markers and white posterboard. Three people took him up on the idea and kneeled on the asphalt to sketch out designs. Boycott Driscolls!, #sanquintín, and Union Contract for Farmworkers were some of the slogans that flowed out of their marker tips, as well as images of crossed out strawberries.

The circle grew over the next half hour as cars drove up and unloaded passengers with more signs and banners. Organizers with the Santa Cruz support committee for the now cross-border Driscoll's berry boycott walked between small groups in the circle and handed press releases to media representatives.

“Si se puede lograr tener una reunión, por favor?” asked Ramon Torres, trying to gather together the assembled people, who then numbered nearly forty. Torres, president of a Washington state berry-pickers union called FUJ or Familias Unidas por la Justicia, is on a month-long tour of Oregon and California to publicize the union's struggles with their employer, Sakuma Brothers. However, FUJ's beef extends to Driscoll's because Sakuma distributes its berries through the larger company. The press release distributed by the local support committee explains further: “FUJ first called for a boycott of Sakuma in 2013 after signed agreements made in mediated negotiation between the company and an elected committee of 11 workers were all broken by the company. In 2014 FUJ called for a boycott of Driscoll's when Sakuma stopped using their own label and had workers picking directly into Driscoll's flats.” Torres is accompanied by Lazaro Matamoro, also a berrypicker and member of Familias Unidas.

FUJ was not the only farmworker union present. Gloria Gracida, a representative from el Sindicato Independiente Nacional Democrático de Jornaleros Agrícolas – a recently formed union representing upwards of 80,000 campesinos (field workers) in San Quintín, Baja California – stood alongside the FUJ members. On March 17th, to begin her part of the coastal boycott tour, Gracida walked for four days from San Quintín to Tijuana before crossing the border there to participate in the California-Oregon tour.

These people gathered on March 31st to march to Driscoll's corporate headquarters in Watsonville and deliver a message asking the company to pressure its client growers to bargain for and respect agreements made with independent unions of farmworkers. The march began just before noon and traveled a short distance down the road to the Driscoll's building, a one-story building located in a complex of glass-fronted offices and parking lots. The marchers stopped on the sidewalk before the office, where they displayed signs and listened to speeches from Torres and Gracida.

Speaking in Spanish and accompanied by a translator, Gracida highlighted the brutal working conditions under which she and other campesinos in Baja exist.

“I have seen many little girls (niñas) and women working in the fields [who become] sick from agricultural chemicals, [who are] raped and sexually harrassed in the fields. For this we shout 'Boycott Driscoll's!'”

She then issued a challenge to the company to refute her claims.

“Here in front of Driscoll's, I challenge you to declare publicly that it's true or false that workers in Mexico make six dollars for twelve hours of work!”

Driscoll's corporate website states that it has a zero tolerance policy for child labor, coercion, abuse, harrassment, and health and safety conditions posing immediate threat to life and limb. It also states that violations of this zero tolerance policy must be corrected immediately by suppliers or result in termination of business relations. This policy is the lynchpin on which the workers demands swing. They say the company can pressure its suppliers to change their practices.

Ramon Torres spoke to the simple, specific demands of the farmworker unions, highlighting requests for medical care, dignified and sanitary housing for workers, pensions, a fifteen-dollar minimum wage, and union contracts for workers organized independently of larger, more established unions. These demands would provide long term stability to farmworker families. “You have the power to stop exploitation,” Torres said, “Our children don't deserve the fields, they deserve opportunity!”

Two Driscoll's employees came out from the offices with a plastic jug of water and paper cups for the protestors, as well as a sign printed on office paper stating Driscoll's respect for the assembled people's right to be present and a request that such protest occur peacefully. They were met with hisses and boos from the crowd. One person yelled, “Water? This is bullshit, they want justice, not your water!” Gracida stated that the water was an insult, saying that the same respectful treatment is lacking in Baja, where workers commonly carry water with them in empty soda cans because no clean water is available in the fields.

The Driscoll's employees spoke to the assembled crowd. “We admire your passion,” they said. Torres then held an extended conversation with them. “Do you know that kids in Washington berry fields get paid only 85% of what adults are paid? Talk to your bosses.” He reiterated a central demand of the boycott movement as well, saying, “We want a union contract.”

The protest continued on until about 1pm. Marchers gathered before the Driscoll's office to take a group photo with signs and banners. Representatives from community organizations including the Center for Farmworke Families, the International Migrants Alliance, and the Watsonville Brown Berets took turns on the megaphone with messages of support.

Torres, Gracida, and Matamoros have a long trip ahead of them still. Speaking on March 30th at Barrios Unidos on Soquel Avenue in Santa Cruz, Torres explained that they want to build boycott coordinating committees in seventy cities on the west coast. So far, they're at fifty-three. FUJ and the San Quintín workers want to build a movement on the scale of the United Farm Workers grape strike headed by Dolores Huerta and César Chávez in the 1960s, a historical specter of which they are very aware. Gracida made a point in her speech to recall that March 31st is in fact César Chávez's birthday and invoked his figure, saying, “In César Chávez name, boycott Driscoll's!” Both unions have agreed to not sign union contracts unless the other is given one as well, tying their fates together for the near future.

For more information on this issue, look for coverage by the Los Angeles Times and the Nation Magazine. Additionally, Driscoll's corporate website can be found at http://www.driscolls.com, Familias Unifas por la Justicia at http://boycottsakumaberries.com, and el Sindicato Independiente Nacional Democrático de Jornaleros Agrícolas at “Sindja” on facebook.
§union representatives and supporters address crowd
by zh 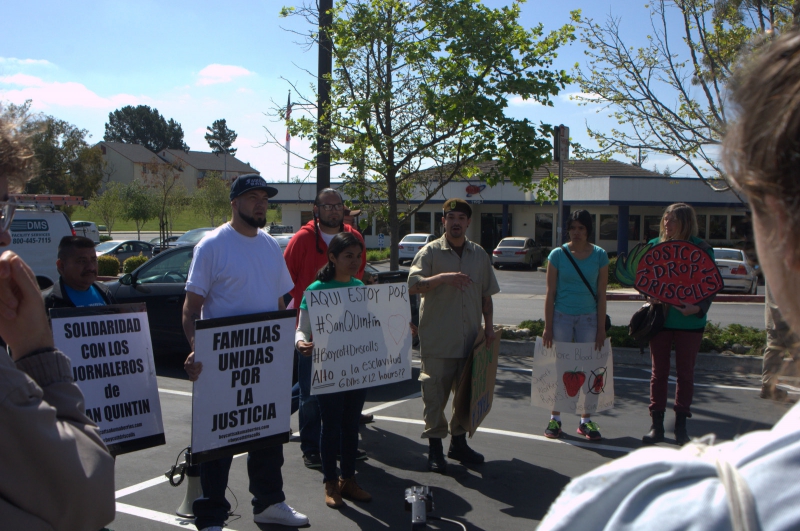 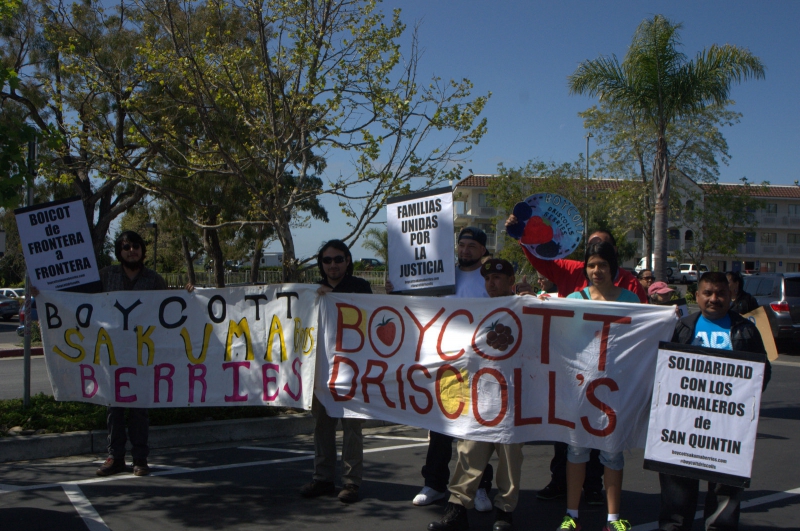 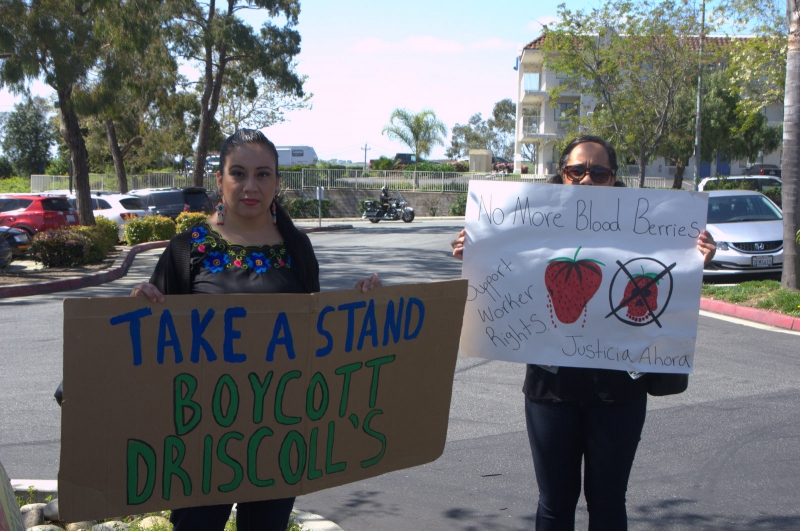 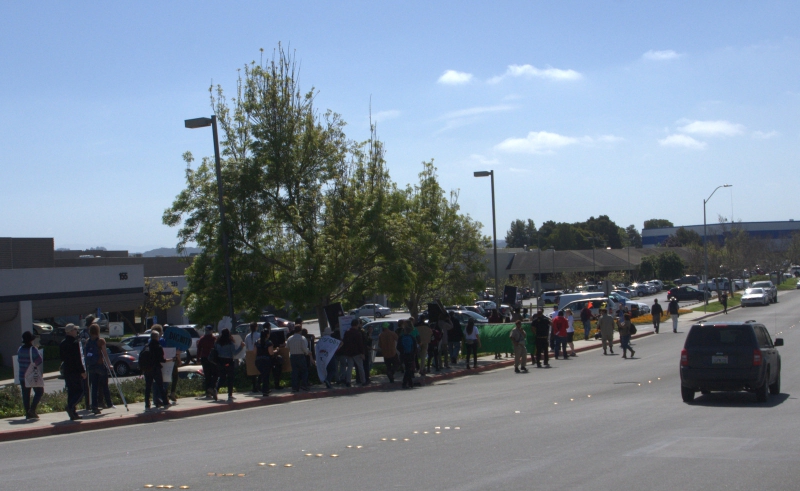 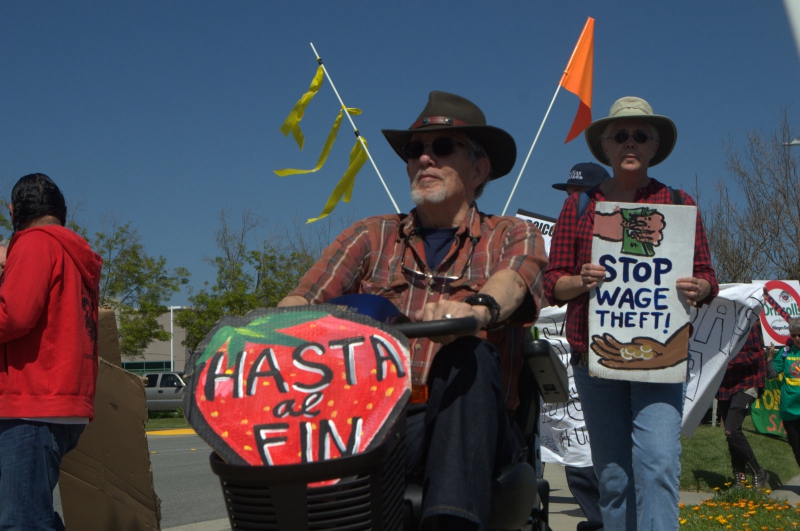 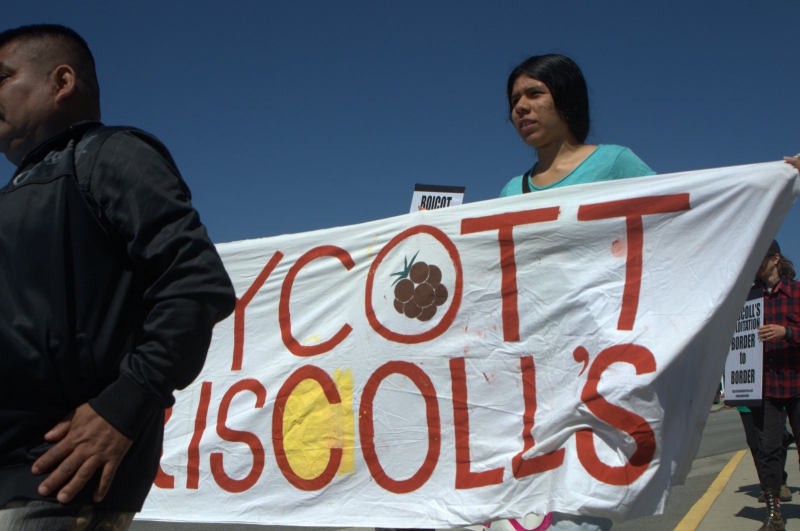 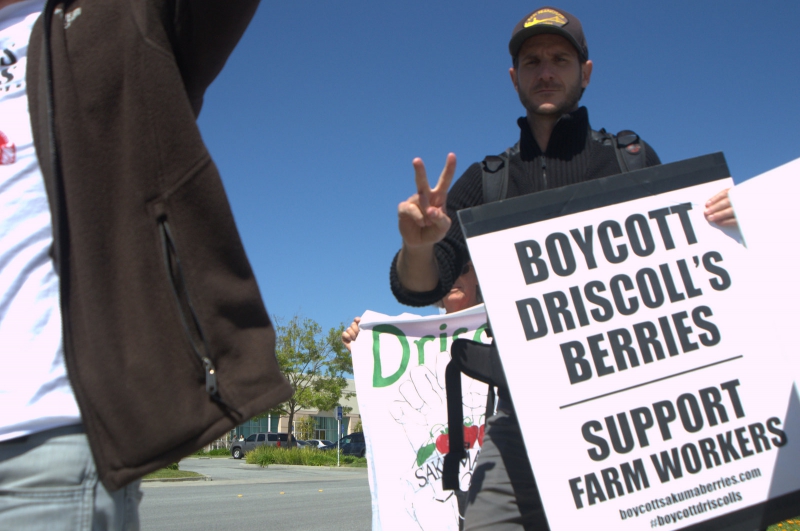 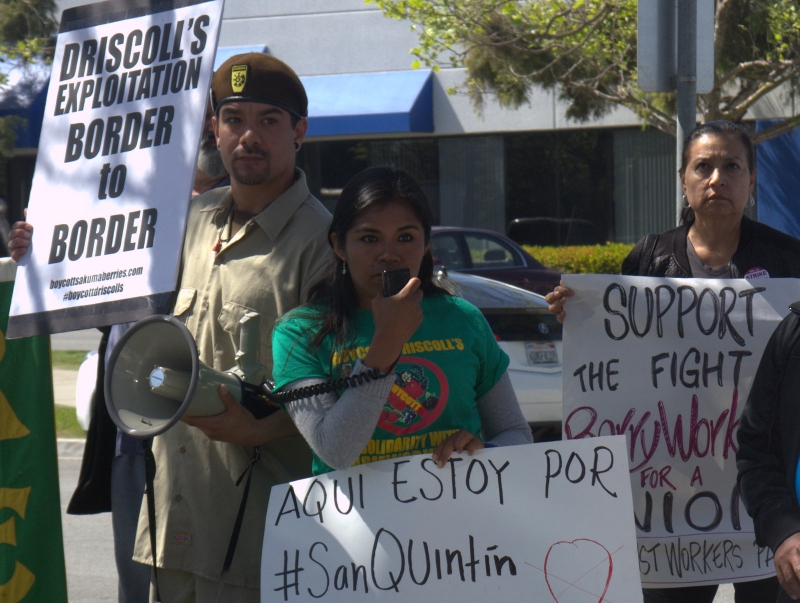 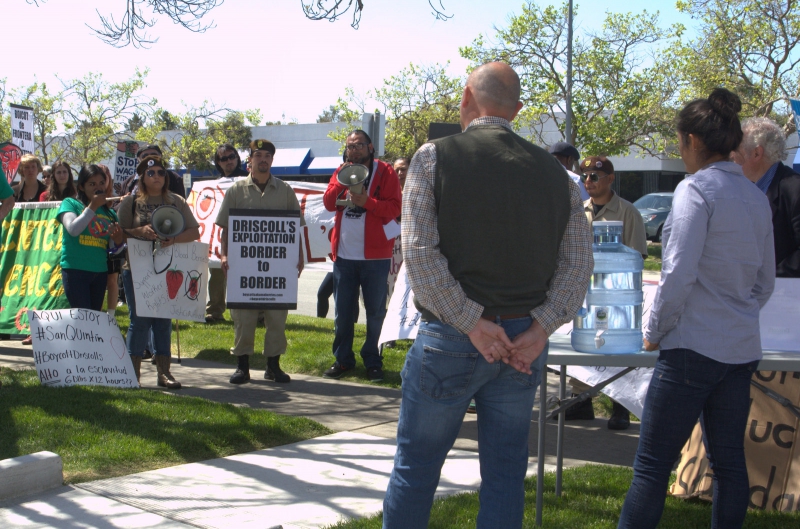 original image (1600x611)
Add Your Comments
Support Independent Media
We are 100% volunteer and depend on your participation to sustain our efforts!