by Rosalinda Guillen, for The Stand
(March 15, 2016) — For the last three years, farmworker members of Familias Unidas por la Justicia have built a movement and acted with great courage, sacrifice and dedication, drawing many allies into their struggle, and now the time is ripe for us all to intensify our efforts so that this historic movement can win the first union contract this year. 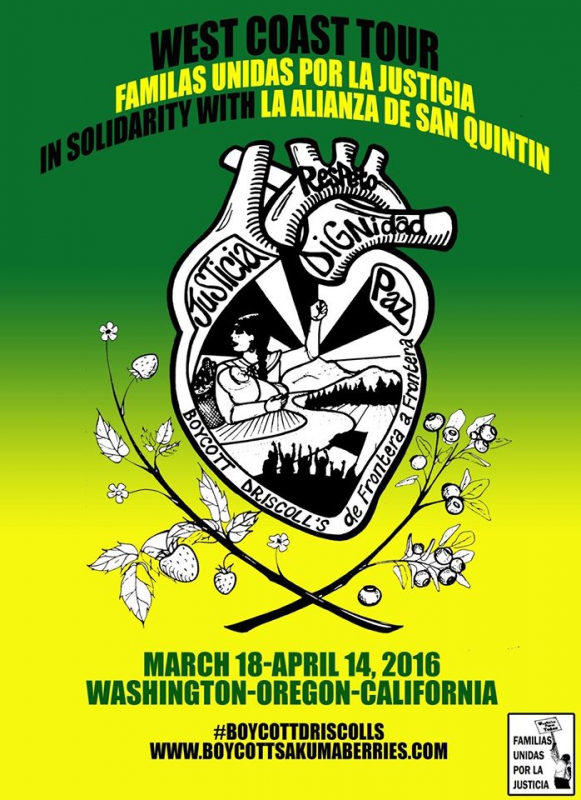 original image (698x960)
This contract will be a major stepping stone on a long road to justice, giving farm workers the stability and resources to work with dignity and push for broader transformations like ending pesticide use, establishing worker owned cooperatives, addressing climate change issues in food production and increasing wages and building the recognition as a dignified valued workforce in the food system.

Sakuma Brothers Berry Farms and Driscoll’s are feeling the pressure from the growing amount of boycott activity. The boycott of Sakuma and Driscoll berries has grown tremendously since FUJ called for the boycott in the fall of 2013. And even more since the over 80,000 farmworkers who also pick berries for Driscoll in San Quintin Mexico went on strike, formed a union and endorsed the boycott in March of 2014.

Now, as the two unions have joined forces and agreed that they won’t end the boycott until both independent unions have contracts signed with their employers, a major offensive is necessary to build upon our momentum to try and bring the growers to the negotiating table this year.

The goal of this tour is to strengthen all the existing boycott committees that are playing a crucial role in this struggle, and to recruit activists that will form new committees where they don’t exist. In every city we stop we will organize with supporters speak out events, and actions and give people the info they need to form boycott committees.

There will be a major action at the Driscoll’s headquarters in Watsonville, as well as at the U.S. Mexico Border where members of FUJ will meet with farm worker members of the newly formed San Quintin Mexican union, La Alianza de Organizaciones por la Justicia Social on either side of the border, proving that the barriers created by NAFTA cannot stop solidarity between workers.

Rarely do you have an opportunity to take action that can contribute to a dynamic change in our food system by supporting workers leading that change. This is it!

There are two major ways you can make this tour a success and contribute to the victory of Familias Unidas por la Justicia.

1. FUJ leaders and members have been working to raise $10,000 by March 15th to cover gas, food, housing and materials for the time the 8-person crew will be on the road. All individual and collective fundraising efforts are greatly appreciated as the tour is approaching quickly and we are short of our goal! To donate directly to the tour, click here: http://boycottsakumaberries.com/donate/

You can also share our GoFundMe Campaign on social media linked here: https://www.gofundme.com/farmworkerjustice

2. If you live on our planned route — listed below — we are eager to collaborate with you. This is your chance to meet Union President Ramon Torres and hear first-hand from the farm workers who are leading this historic movement. E-mail us here: boycottcoordination [at] gmail.com

Here is the tour schedule — check here for updates and more detail as it become available: http://boycottsakumaberries.com/campaign-updates/familias-unidas-boycott-driscolls-tour/


Rosalinda Guillen is Executive Director of Community to Community (C2C). A former farmworker, Guillen has worked within the labor movement with Cesar Chavez’s United Farm Workers of America and has represented farm workers in ongoing dialogues of immigration issues, labor rights, trade agreements, and strengthening the food sovereignty movement.

The Stand
http://www.thestand.org/
Add Your Comments
Support Independent Media
We are 100% volunteer and depend on your participation to sustain our efforts!