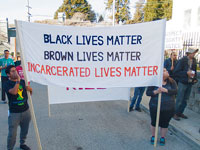 At least six people have died in the Santa Cruz County Jail since August of 2012 while in the hands of the Sheriff’s Department and California Forensics Medical Group (CFMG). In light of the most recent death in November 2014, community-based organization Sin Barras, which fights to abolish prisons and the prison industrial-complex, held a demonstration on January 24 in downtown Santa Cruz.

After a year-long investigation of deaths in the jail, prompted by public criticism and concern, the Santa Cruz County Grand Jury released a report including recommendations to improve physical and mental health conditions in the jail. One of the Grand Jury’s conclusions was that CFMG staff failed to identify and treat symptoms of methadone overdose, and had insufficient oversight and treatment facilities for people in the supposedly monitored units. The Sheriff's Department and CFMG have publicly disagreed with almost all the findings of the report, and since then, another person has died.

Hundreds of people came together to protest and raise awareness around the deaths, to highlight the broader context of overcrowding and lack of healthcare inside California jails and prisons, and create a space for community empowerment. Speakers, including Fox Sloan, mother of Amanda Fox Sloan, who died in the jail July of 2013, shared personal stories which shed light on the violence of the prison system and strategies for building alternative forms of justice.