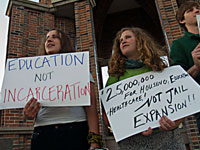 The Sheriff’s Office, which operates the county’s adult jail facilities, says the grant money from the state would be used to relieve the overcrowded main jail in Santa Cruz, and to expand upon education and job training programs offered there. The proposal’s promise of more programming in the main jail depends on space being freed up by the removal of temporary beds from “day areas”. But the proposal can’t guarantee a reduction in Santa Cruz County’s overcrowded population over the long term, and were the jail population to rise for any reason, there would be nothing to stop those temporary beds from going right back into the “day areas”.

Sin Barras, an organization that has been leading the campaign to fight jail expansion locally, has a counter-proposal: Rather than expand and reopen unused jail facilities, our county needs to truly invest in our community by funding employment, affordable housing, and mental health & drug treatment.