“Once our loved ones are incarcerated, we are shoved out of the picture, and our concern and care becomes irrelevant and annoying to those operating the jail,” said Sloan. 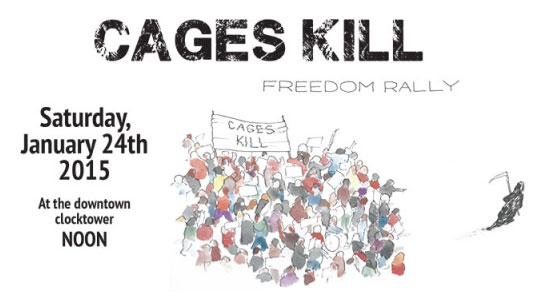 At least 6 people have died in the Santa Cruz County Jail since August 2012 while in the hands of the Sheriff's Department and California Forensics Medical Group (CFMG). In light of the most recent death in November, Sin Barras is organizing a demonstration this Saturday, co-sponsored by the Santa Cruz County Community Coalition to Overcome Racism (SCCCCOR), Women’s International League for Peace and Freedom (WILPF), and Project: Pollinate. Sin Barras states that the purpose of the protest is to raise awareness around the deaths, to highlight the broader context of overcrowding and lack of healthcare inside California jails and prisons, and create a space for community empowerment. As an abolitionist organization, Sin Barras seeks reforms that fit into a larger project of halting jail expansion across the state of California and investing in community-based alternatives.

After a year-long investigation of these deaths, prompted by public criticism and concern, the Santa Cruz Grand Jury released a report including recommendations to improve physical and mental health conditions in the jail. One of the Grand Jury’s conclusions was that CFMG staff failed to identify and treat symptoms of methadone overdose, and had insufficient oversight and treatment facilities for people in the supposedly monitored units. The Sheriff's Department and CFMG have publicly disagreed with almost all the findings of the report, and since then, another person has died.

In coordination with local, national, and international organizations, Sin Barras is mobilizing to demand that:

1. The Board of Supervisors cancel its contract with California Forensic Medical Group.
2. The Sheriff's Department and CFMG accept responsibility for the unnatural deaths and implement the Grand Jury recommendations to expand Crisis Intervention Team mental health services.
3. Solitary confinement/administrative segregation and other forms of torture, such as the "restraint chair," be abolished.
4. The County cancel the $24.6 million planned expansion of Rountree Detention Center and invest in community-based social services.

Sin Barras and their allies, including formerly incarcerated people and people who have lost loved ones inside the jail, argue that Santa Cruz needs to step up its efforts to expand alternatives to incarceration. The County should immediately cease its use of torture in the jail, particularly the practice of solitary confinement and use of the “restraint chair.” Paul Spector, RN and former employee of the California Department of Corrections, states that while manufacturer instructions say the chair is "not to be used for punishment... it's only use is punishment, and sometimes death."

At the rally, speakers will share personal stories that shed light on the violence of the prison system and strategies for building alternative forms of justice, including Fox Sloan, mother of Amanda Fox Sloan, who died in the jail July of 2013.

“Once our loved ones are incarcerated, we are shoved out of the picture, and our concern and care becomes irrelevant and annoying to those operating the jail. The jail as it is, is woefully ill-equipped to provide the care each individual needs. Many people need help and healing, options and avenues for restoration to a peaceful and positive life—not punishment for situations beyond their control, where they have suffered and are trying to survive,” said Sloan.

###
http://sinbarras.org/
Add Your Comments
LATEST COMMENTS ABOUT THIS ARTICLE
Listed below are the latest comments about this post.
These comments are submitted anonymously by website visitors.