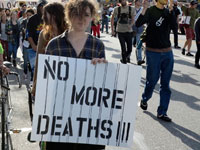 Following the release in May of the Santa Cruz County Grand Jury report on jail medical care and conditions, one juror reported he was “shocked” at the lax oversight and poor communication between jail staff and medical personnel that led to five deaths in the facility during the past 11 months. While the "normal" mortality rate is around 125 per 100,000 inmates, Santa Cruz County's rate was 10 times that number during that period.

Activists say they are alarmed that these deaths came as the county outsourced jail medical treatment to private Monterey-based California Forensic Medical Group, a decision that effectively placed medical care for jail inmates beyond local control or accountability.

Steve Pleich writes: "In my view, these deaths are a tragic and unacceptable symptom of a disease. But the real disease is mass incarceration driven by the prison/industrial complex and fueled by institutional racism. Mainstream society seems comfortable with the policy of separating whole segments of our population from their liberty and in supporting a prison/industrial complex that is building new jail and prison cells at an unprecedented rate. So what questions do we need to ask to at least begin to understand and address the grave social issues that this current state of affairs represents?"