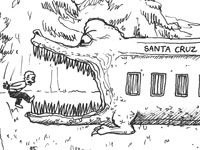 On November 5, a woman died in the Santa Cruz County Jail. The Santa Cruz Sheriff’s Department immediately claimed there was nothing suspicious about the death, calling it a “medical event.” Sin Barras, a Santa Cruz-based prison abolition organization, has said the deaths were, "preventable in more ways than one."

Sin Barras writes: "There is undoubtedly something suspicious about six deaths occurring in a jail within two years, especially in light of the recent Grand Jury investigation, which found most of the deaths to be preventable. Our jail is overcrowded with people who have not been convicted of crimes, but simply cannot afford to pay bail. Our jail is overcrowded with people who need drug treatment and affordable housing. These deaths were preventable in more ways than one. Do we need another investigation to confirm this?"

Previous Coverage: Grand Jury Report on Jail Deaths Only a Snapshot of the Larger Picture || Sin Barras Rally at SC County Jail Held in Response to Recent Deaths at Facility