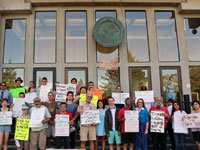 Residents and representatives of community organizations in Santa Cruz rallied outside of the court house on May 14 to voice their strong opposition to the Governor's May revise budget, which calls for an increase in spending for jail and prison expansion. According to Californians United for A Responsible Budget (CURB), spending on corrections in the state will rise 2.9%, and total spending on prisons will top $12 billion if the budget revision is adopted. Similar rallies were also held in San Francisco, Bakersfield, Los Angeles, San Bernardino, and San Diego.

"We are out here today because we know that if we put this money toward restoring social services, and the social safety net for the state of California, that we won't be locking up as many people because these two things are directly related," said Courtney Hanson of the organization Sin Barras. "They take funding away from services that people need to survive," she said.

Sin Barras has emphasized there is $5 billion that is available right now in the budget to fund social services, yet funding to begin the expansion of medical parole, to begin an elder parole program, and to create a parole process for non-violent and non-sexual second strikers has been cut to half what it was in the Governor's January budget.