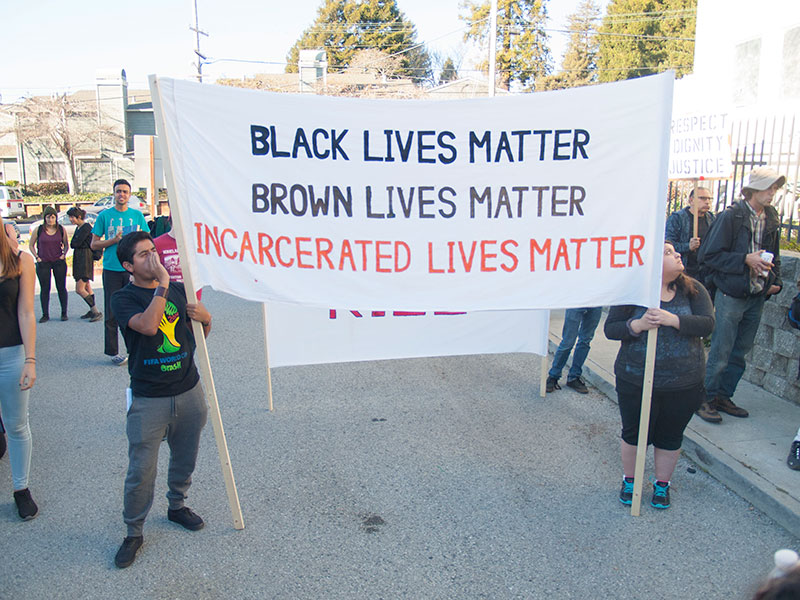 [Photo: Demonstrators shout in solidarity with prisoners at the Santa Cruz County Jail on January 24, 2015. ]


At least 6 people have died in the Santa Cruz County Jail since August 2012 while in the hands of the Sheriff's Department and California Forensics Medical Group (CFMG). In light of the most recent death in November 2014, community-based organization Sin Barras, which fights to abolish prisons and the prison industrial-complex, held a demonstration on January 24, 2015 in downtown Santa Cruz.

Hundreds of people came together to protest and raise awareness around the deaths, to highlight the broader context of overcrowding and lack of healthcare inside California jails and prisons, and create a space for community empowerment.

Speakers, including Fox Sloan, mother of Amanda Fox Sloan, who died in the jail July of 2013, shared personal stories which shed light on the violence of the prison system and strategies for building alternative forms of justice.

As an abolitionist organization, Sin Barras seeks reforms that fit into a larger project of halting jail expansion across the state of California and investing in community-based alternatives.

After a year-long investigation of deaths in the jail, prompted by public criticism and concern, the Santa Cruz County Grand Jury released a report including recommendations to improve physical and mental health conditions in the jail. One of the Grand Jury’s conclusions was that CFMG staff failed to identify and treat symptoms of methadone overdose, and had insufficient oversight and treatment facilities for people in the supposedly monitored units. The Sheriff's Department and CFMG have publicly disagreed with almost all the findings of the report, and since then, another person has died.

In coordination with local, national, and international organizations, Sin Barras is mobilizing to demand that:

1) We demand that the Board of Supervisors cancel its contract with California Forensic Medical Group.

Since August 2012, at least six people have died in the Santa Cruz County Jail. Five of these deaths occurred after former Sheriff Phil Wowak and the County Board of Supervisors decided to outsource medical care to California Forensic Medical Group, California’s largest for-­profit jail health care company. CFMG holds contracts in 27 counties, killing and neglecting prisoners in almost every one. CFMG is currently the target of a federal lawsuit filed by the Monterey County Public Defenders’ Office and the ACLU, the American Civil Liberties Union in May of 2013 alleging “unconstitutional and ‘systematically’ poor medical care at Monterey County Jail.” Dr. Mike Puisis, editor of the journal Clinical Practice in Correctional Medicine toured the jail, reviewed patients’ medical charts, and interviewed CA Forensic staff, finding the following: “Too-­low levels of staffing, that psychiatrists and physicians were not on site for tasks that nurses had to take on, that records of medications and treatments were often never written, that effective tuberculosis and infectious disease controls were not practiced, that rubber­-lined holding tanks for de­toxing inmates were unsanitary and unsafe, and that the jail's clinics were too small and had no examination tables."

In Santa Cruz, the stories are the same. Brant Monnett died in one of CFMG’s “detoxification” cells in November 2012, and was not treated or hospitalized when he showed clear signs of methadone overdose. According to the statement of facts in a lawsuit filed by his family, Bradley Dreher, who died in the jail January 2013, was denied his prescribed medication, which he takes regularly to avoid panic attacks and self-­harm. On the morning of his death, the detention officer assigned to check on Dreher reported that he was fine, despite the fact that Bradley had already written a large suicide note on his cell wall and torn up his bedding to facilitate his suicide.

After a year­-long investigation of these five deaths (now numbering 6), the Santa Cruz Grand Jury concluded that CFMG staff failed to identify and treat symptoms of methadone overdose, and had insufficient oversight and treatment facilities for people in the supposedly monitored units.

A total of 885 jail deaths occurred nationally in 2011. The vast majority of jails reported zero deaths; 13% reported a single death; 6% reported two or more deaths. Santa Cruz County recorded 5 deaths during an eleven month period spanning 2012-­2?013. Canceling the contract with CFMG is a concrete step toward ending premature deaths in the jail.

As part of the Grand Jury, members of the Santa Cruz community spent a year thoroughly investigating recent jail deaths and providing researched recommendations to improve the physical and mental care of those inside. The Sheriff and CFMG not only fell short in their response, but completely ignored the findings of the report, stating that they “disagreed” with all of them, except one. The only finding that they took action upon was the one that involved further policing and surveillance of inmates, even though the investigation at its core highlighted the dangerous unaccountability of the Sheriff and CFMG.

Underlying the normalization of these prisoners’ deaths is the idea that prisoners deserve whatever happens to them while incarcerated as punishment for their “crimes.” More broadly, there is an assumption that incarceration is an appropriate response to “crime,” however vaguely defined. People in charge of the jail and its operations have denied themselves of responsibility by twisting the story to say that these six people died simply because of their own bodies.

Deaths in the jail can only be dismissed as business-­as-­usual in a society that disinvests from those it does not profit from, that blames individuals for systemic social and economic problems, and criminalizes people that need access to mental health and drug treatment. These deaths signal an urgent need for mental health support inside the jail, but also demand that we take seriously the ways that jails and prisons are inherently detrimental to mental health.

3) Abolish solitary confinement/administrative segregation and use of the “torture chair,” formally called a “restraint chair.”

The “restraint chair” is used to torture inmates in jails and prisons across the country. Paul Spector, RN and former employee for the California Department of Corrections, wrote: “Even though according to manufacturer instructions, the chair is not to be used for punishment, it’s only use is punishment, and sometimes death.”

Recently in Santa Cruz, a Black man was held in the chair for 5 hours and reported the incident to Santa Cruz County Community Coalition to Overcome Racism (SCCCCOR). (In Santa Cruz, Black people are 1.8% of the total population, but 9% of the jail population.) He was put in the “cold room,” a cell in the back of the jail with no toilet, sink, phone, and with the air conditioner turned up but no blanket. He requested an alcohol test, because the police claimed they arrested him for “drunk in public,” and they entered his cell in riot gear. Officers threatened to pepper spray him, and forced him into the chair, which caused excruciating pain. The tight straps that cut off circulation caused him to yell and scream to guards, “this is really hurting,” but they told him it was supposed to be that way. During his time in the chair, he was refused water and not allowed to use the bathroom. After this incident, he was released without any charges.

In the county and across the state and country, solitary confinement and extralegal torture are used disproportionately against people of color. Abolishing these practices is a priority.

In the Fall of 2013, Santa Cruz County was granted their request of $24.6 million to re-­open and expand the Rountree Detention Center in Watsonville. This money came from a pool of $500 million dollars, which was doled out by a body called the Board of State and Community Corrections. The Board was created at the onset of Jerry Brown’s Realignment, and is dominated by law enforcement officials.

While the numbers of incarcerated people in the state may be dropping on paper, the reality is that prisoners are being shuffled to county jails and moved to out-­of-­state prisons. The crisis that brought on “Realignment” is a fundamental crisis about the way the prison system sweeps up people who are poor, in need of jobs and affordable housing, and drug and mental health treatment. People in the United States have been made especially aware through the highly publicized cases of people like Michael Brown and Eric Garner that the prison system specifically targets black and brown people.

What we’re seeing now is the expansion of incarceration without the conventional “tough-­on-­crime” talk. Instead, law enforcement officials are using the language of prison reform to justify the construction of “gender-­responsive” jails, “mental health jails,” and “women’s villages,” where incarcerated mothers can raise their daughters. Expanding Rountree on the grounds of improved programming obscures the fact that this money is being made available for the primary purpose of expanding the physical capacity of the jail system.

California must reduce overcrowding and making constructive programs available to those inside, but the proposed jail expansion cannot guarantee achievement of those goals. Claims that the new facility would reduce overcrowding and free up programming space at the Main Jail are predicated on assumptions of the jail population remaining stable well into the future.

According to the proposal, 64 new beds at the Rountree facility would allow for the removal of temporary beds that now fill the Main Jail’s “day areas,” making programming once again possible in those spaces. But if there is another increase in the number of state prisoners sent to the county jail, if there is an influx of local offenders, or if the jail population increases for any other reason, there is nothing to stop temporary beds from once again pushing programs out of the “day areas.” When this comes to pass, we will be left with a larger, but still overcrowded and still program­ deficient jail. The last two decades of prison expansion in California show that adding more beds does not reduce overcrowding; that we are in this situation now is a testament to that fact. When we build beds, we eventually fill them, and then some.

There are cheaper and more effective ways to ensure that incarcerated people have access to meaningful programs while inside. We do not have to agree to expansion. When we are offered these tempting reforms, we have to ask ourselves: will we be fighting this ten years from now? Is this reform going to strengthen systems of surveillance and criminalization, or is it going to help us get our loved ones home? What are we moving towards?
http://bradleyallen.net/
§Keith McHenry, Food Not Bombs, Tanks No Thanks
by Bradley Allen Monday Jan 26th, 2015 7:40 PM 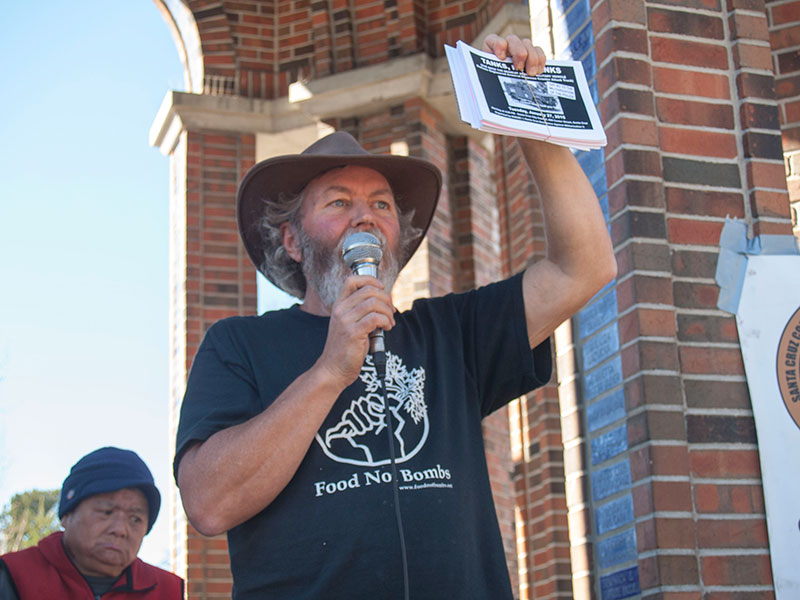 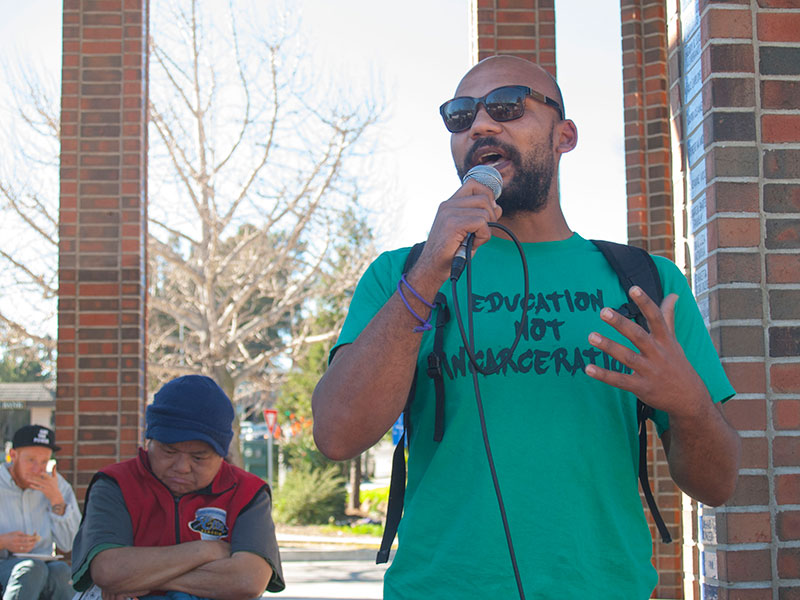 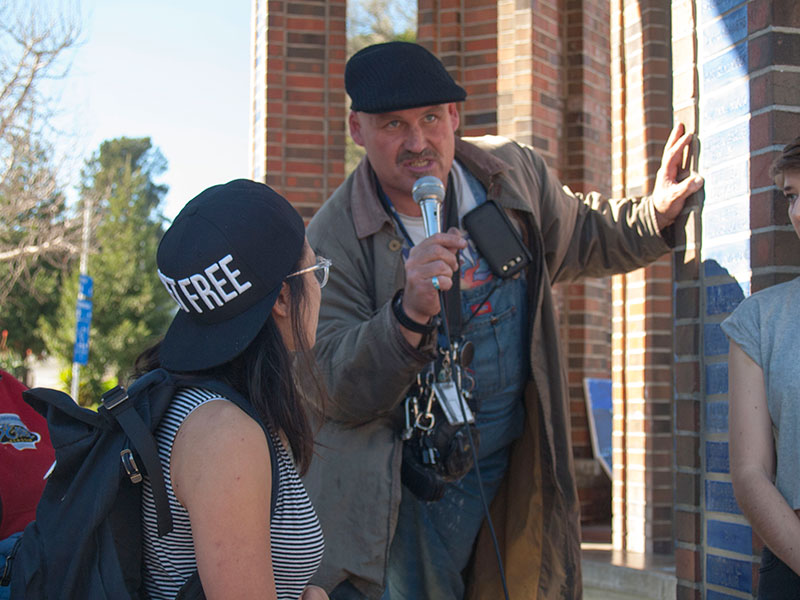 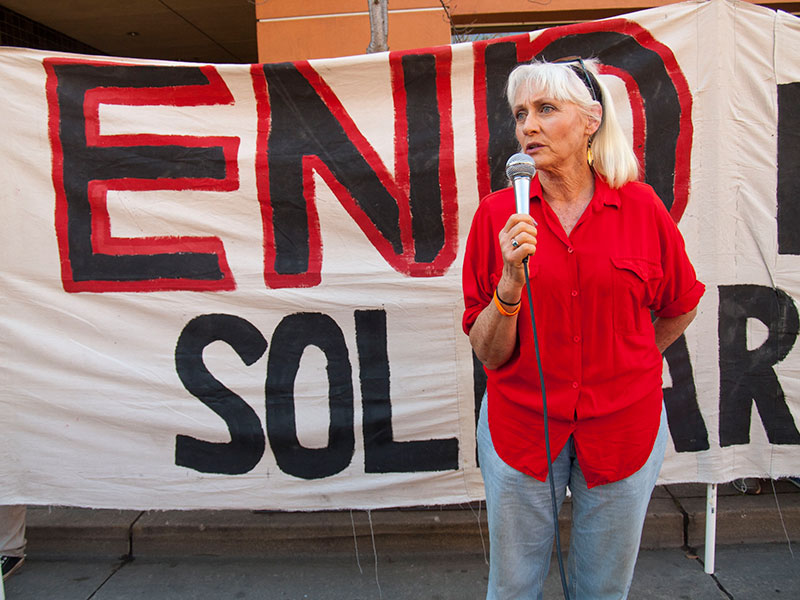 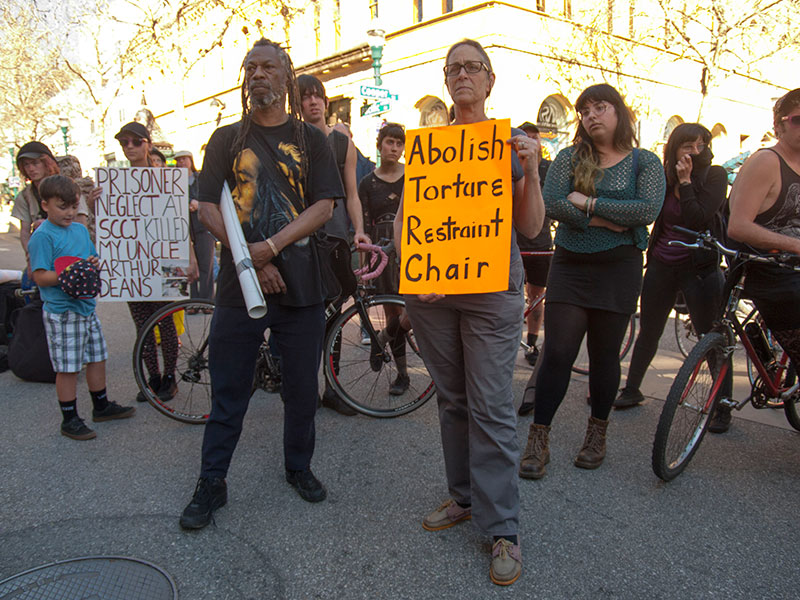 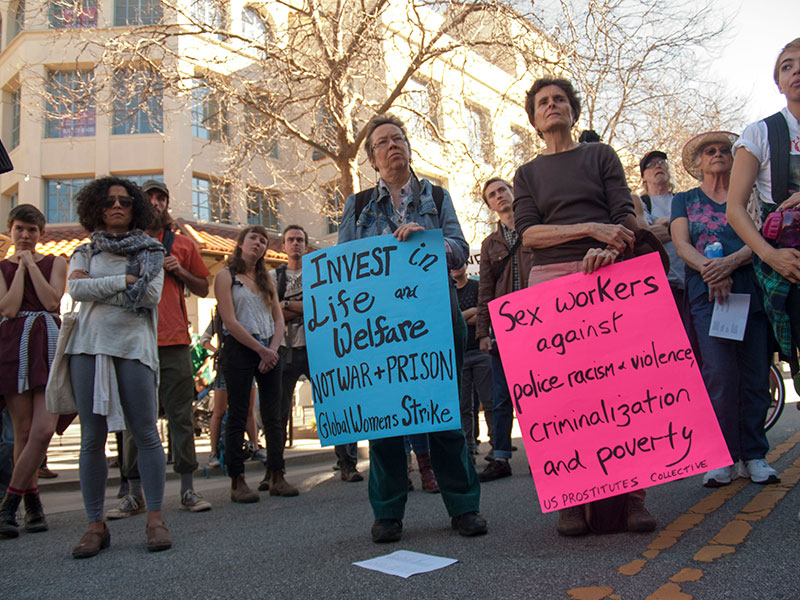 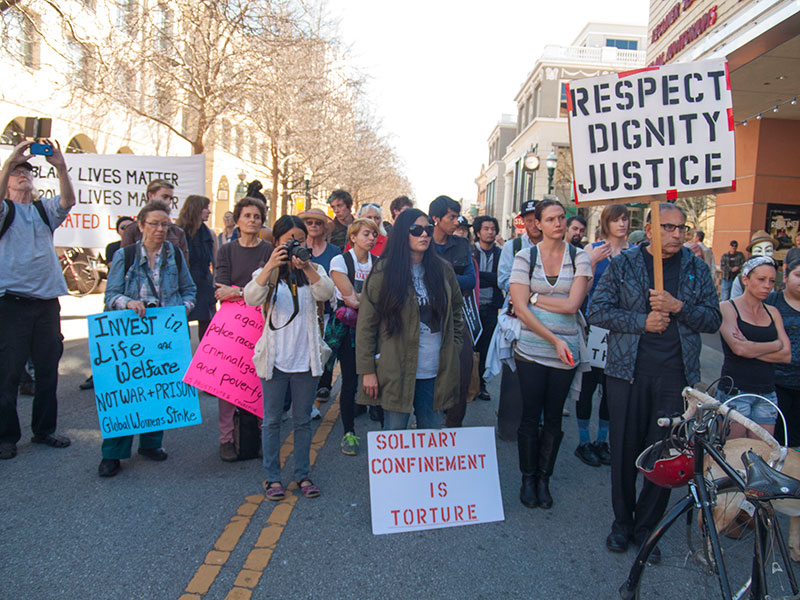 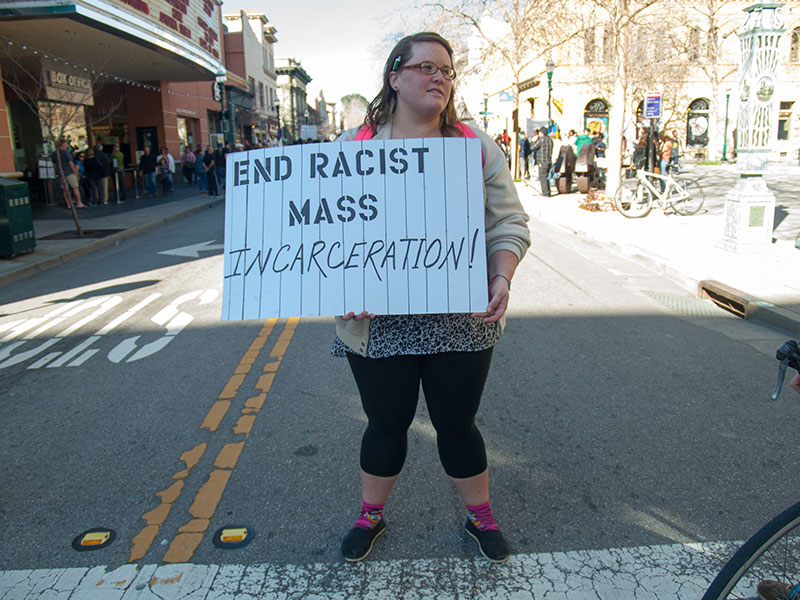 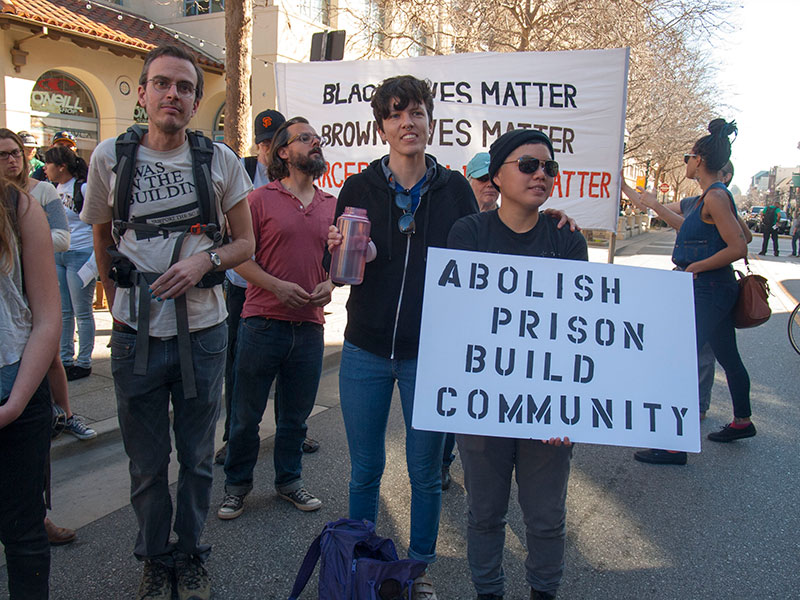 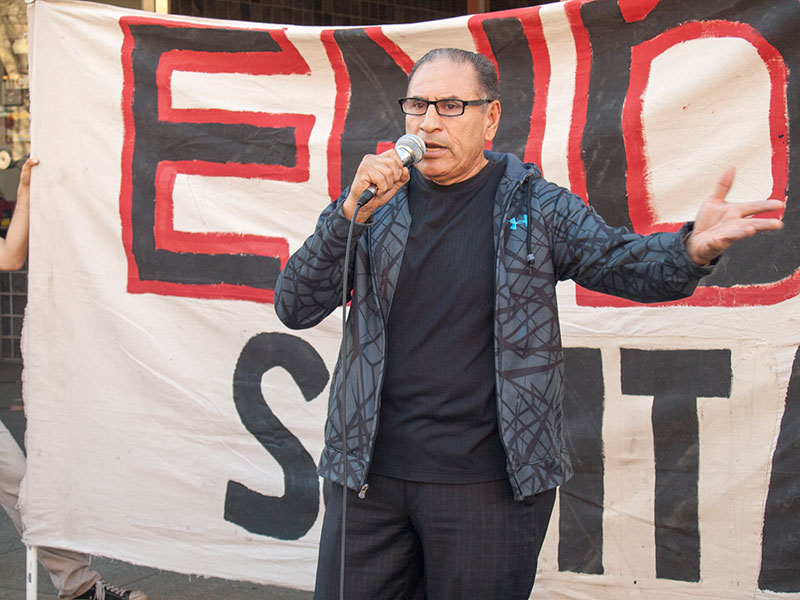 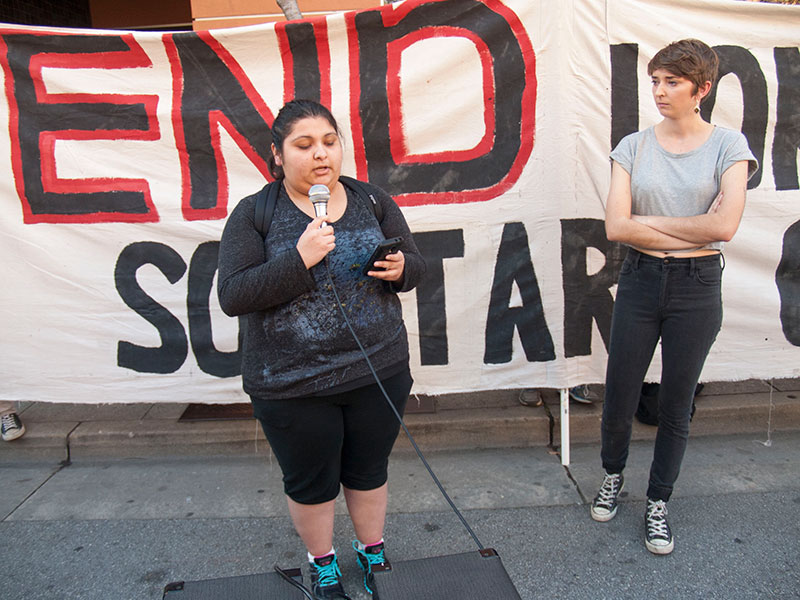 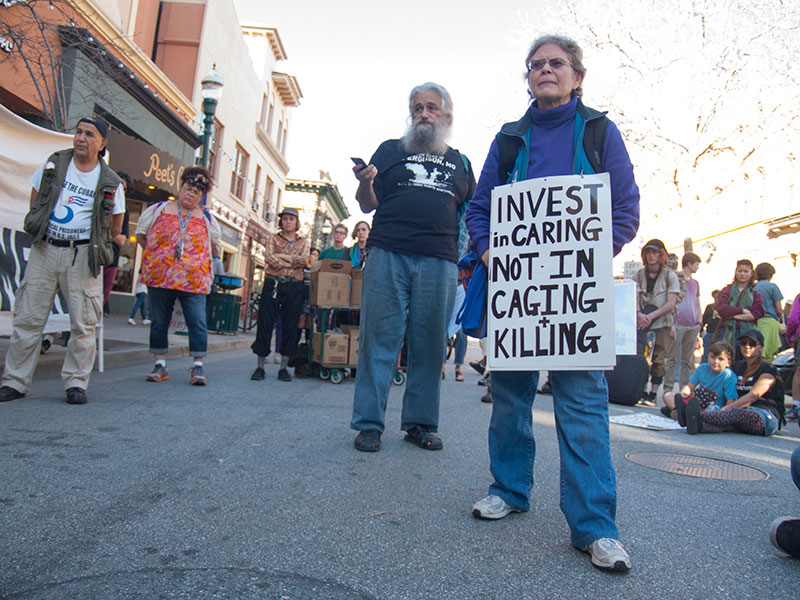 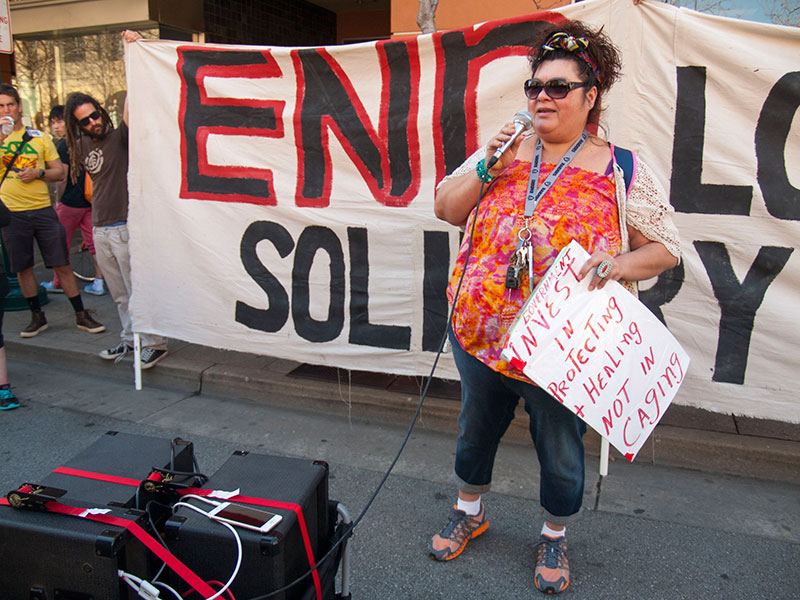 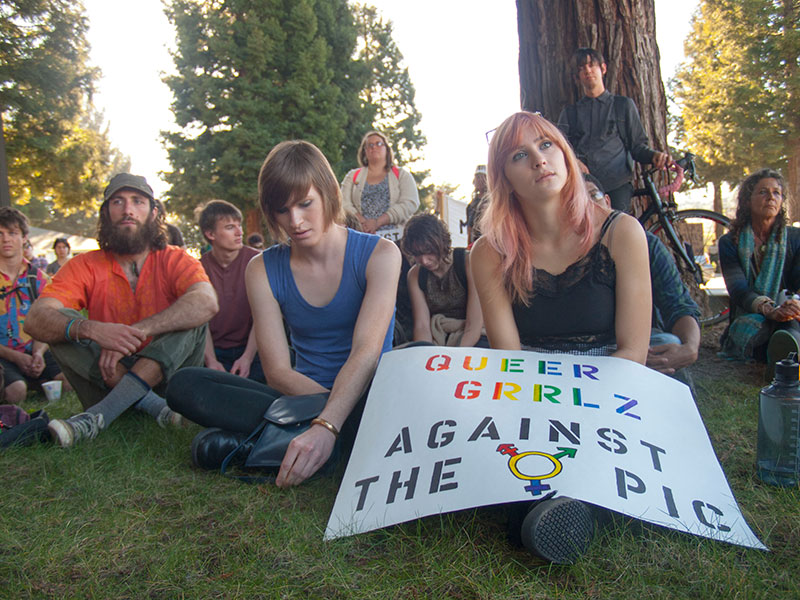 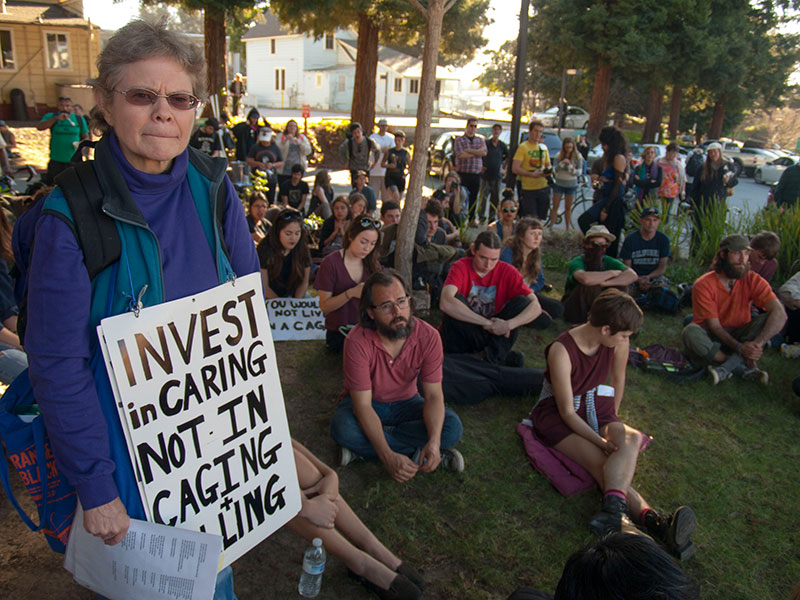 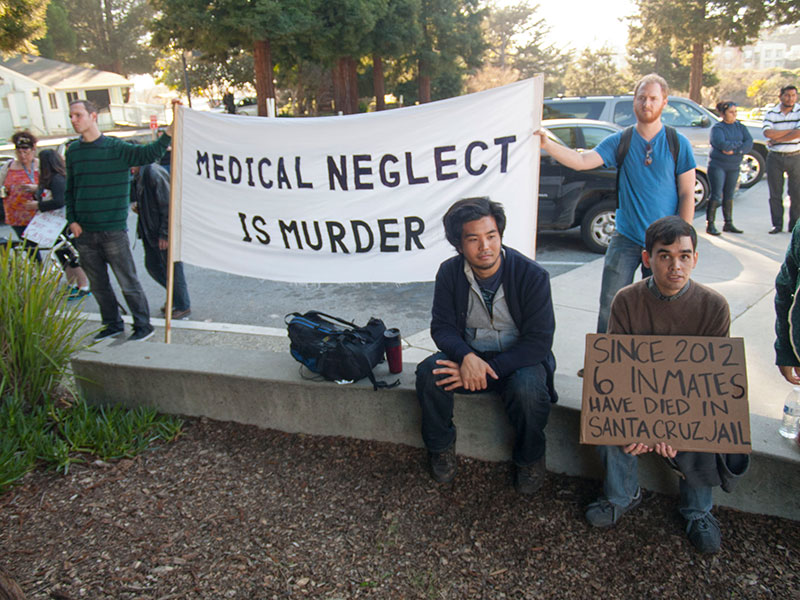 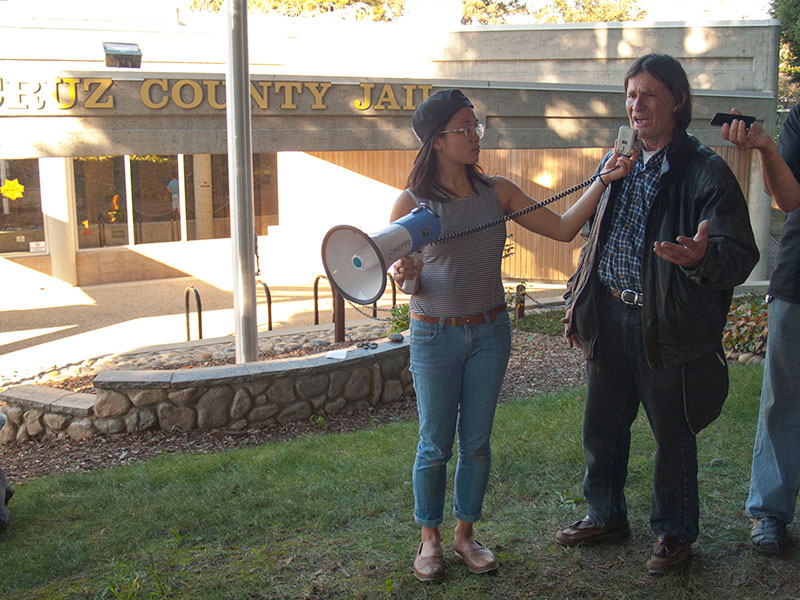 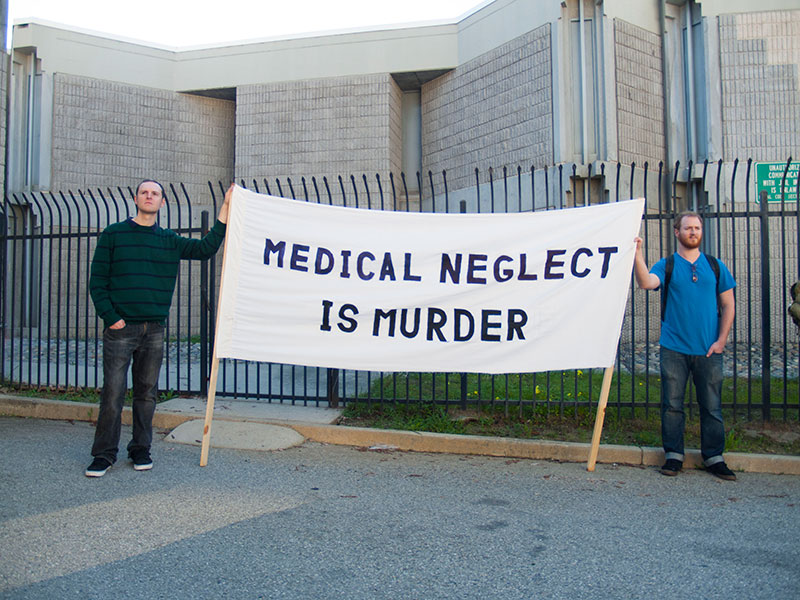 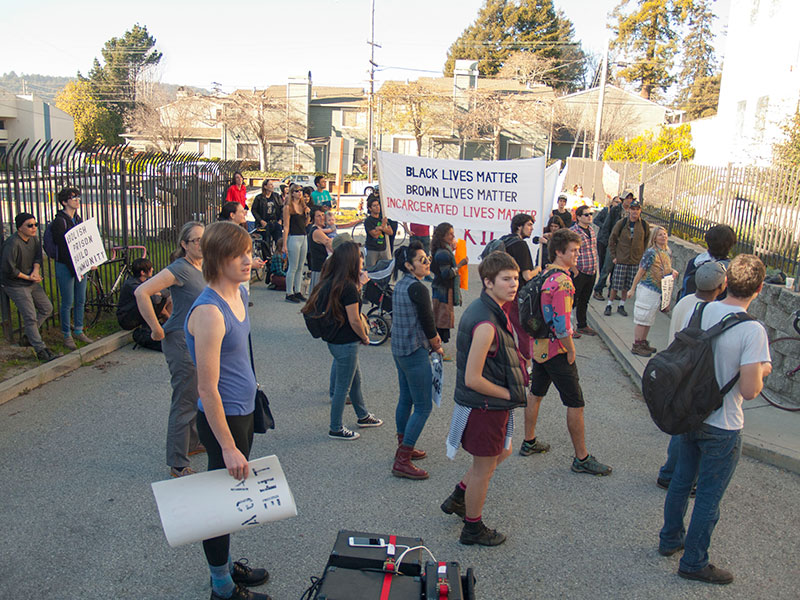