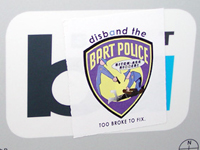 Justice for Oscar Grant activists took to East Bay BART trains and stations on September 4th to inform riders about BART's intransigence toward holding anyone accountable for their police officers' behavior on New Year's Day. Besides laying out some of the basic facts about the events surrounding the murder of Oscar Grant, activists implored: Help us pressure BART to do the right thing and discipline these officers; Help us pressure the state to charge these officers with the crimes they committed. As the morning commute wound down, activists left BART to attend Mehserle's 995 hearing.

Later in the day, after the Mehserle hearing, it was learned that BART's attempt to pass AB1586 (originally named AB16) would fail in this legislative session in the California Assembly, meaning that there would be no new police oversight of any kind established before the end of the year. In April, BART had already stalled Tom Ammiano's AB312, which would have mandated civilian oversight for the BART Police Department (and potentially could have been law by now if BART had gotten behind it). BART stymied AB312 (along with California police unions) under the promise that they would create their own civilian police oversight model, but BART undercut the strength of their proposal every step of the way.

Related Indybay Feature: No Justice No BART Takes the Truth to the Trains, July 16th

BART Police Oversight Vs. Every Cop Union in the State; Police Chief Gee Out; and a Rumor ||