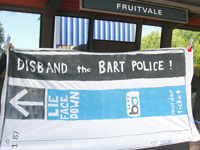 Over six months have passed since the murder of Oscar Grant III and BART has yet to tell the truth about what happened on January 1st, nor has a single employee has been held accountable by BART for their role in the murder, nor for their attempts to cover up the truth. On Thursday, July 16th, No Justice No BART boarded BART trains to inform thousands of people about what happened on the Fruitvale BART platform moments before Oscar Grant was murdered, and the lies told by Police Chief Gary Gee shortly thereafter. Most people NJNB spoke with on the trains and in the stations were not aware of the facts revealed at Johannes Mehserle's preliminary hearing.

Amongst other revelations about the events of January 1st that came to light during Johannes Mehserle's preliminary hearing for the murder of Oscar Grant, video evidence and court room testimony showed that BART police officer Tony Pirone twice yelled, "Bitch ass, ni**er," to Oscar Grant about 30 seconds before Johannes Mehserle shot him in the back. Despite the fact that BART had confiscated the high-quality video on January 1st that depicted BART police actions and words more clearly than in any video made available to the public, BART Police Chief Gary Gee declared at a January 12th press conference that, "All the other officers who responded to the incident at around 2 a.m. at Fruitvale Station followed protocol. They performed their duties in a professional manner."

Read More | No Justice No BART

Contentious and Conversational BART Police Review Committee Public Meeting, 4/20/09 | BART claims officers defended themselves against Oscar Grant and not at fault in murder, 4/3/09