Add an Event
Newswire
Calendar
Features
Home
Donate
From the Open-Publishing Calendar
From the Open-Publishing Newswire
Indybay Feature
Publish to Newswire
Add an Event
Related Categories: East Bay | Police State & Prisons | Racial Justice
NOBLE Improves Their People Skills for 2nd Community Forum on BART Police, Oakland, 6/23/09: audio
by dave id
Thursday Jun 25th, 2009 4:33 PM
After their disappointing first community forum for BART police review in San Francisco the day before, NOBLE showed a slightly more deft tact in dealing with the public at their second, larger forum in Oakland on June 23rd. NOBLE seemed to have learned a little from prior mistakes, especially in that they did not hand out a condescending rule sheet to attendees, did not try to artificially shape comments to exclude discussion of the murder of Oscar Grant, and, at the end of the evening, they profusely thanked participants for volunteering their time. While NOBLE says there are still another three months to go in their "top to bottom" review of the BART police department, they are already over a full month into it and it is obvious that there are serious shortcomings in their knowledge of BART police history and the case of Oscar Grant, as pointed out by multiple speakers. How much integrity and courage they will show in confronting BART's corrupt police force and those responsible for supervising it remains to be seen. 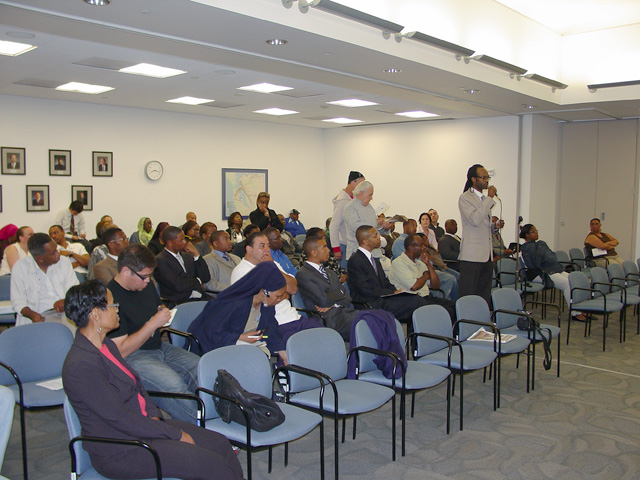 Speakers questioned the forum process itself, what is to come of it and how much public input will even matter, as well as NOBLE's commitment to justice when they are being paid $128,000 by a BART that thus far seems set on covering up for the crimes of its officers on January 1st rather than holding anyone accountable. While already a month or more into their review of BART police, it appears that NOBLE is not fully informed as they did not attend any of the preliminary hearing for Johannes Merhserle nor do they seem aware of the many lies told by BART officers in court. Speakers reminded NOBLE that BART police have killed three unarmed African American men in the East Bay -- Jerrold Hall, Bruce Edward Seward, and Oscar Grant -- and BART has officially justified all three homicides. To this day, BART has not disciplined anyone in connection with the murder of Oscar Grant, from the officers on the platform that night to Chief Gee to General Manager Dorothy Dugger, all of whom either participated in the crime or the cover-up.

Community members spoke of personal experiences they have had with racist BART police and its phony Internal Affairs division that has discouraged citizen complaints. They spoke of overcrowded trains and BART's riot/tactical police unit unnecessarily being present on New Year's Eve. They spoke of the cops on the platform the night of Oscar Grant's murder seeming amped up and paranoid, perhaps due to drug use of some sort. It was noted that Officer Tony Pirone was heard on video shown in court to have called Oscar Grant a "bitch ass nigger" moments before he shoved Oscar Grant to the platform floor and put his knee in Oscar Grant's back, a mere 30 seconds before Johannes Mehserle shot Oscar Grant in the back. (The corporate media has not reported the repeated use of the N-word by BART police that night.)

NOBLE finally opened up a bit and stated that their goal is to put BART on better footing in its relationship with the community, that they feel like that is what NOBLE is good at doing as an organization. They also answered the oft-repeated question of if they felt anything as human beings when they watched the murder of Oscar Grant on video -- they said yes it affected them, and that it had compelled them to get involved as an organization to do what they could to help.

While this second forum was markedly better than the first on NOBLE's part, NOBLE was confronted throughout with strong skepticism that they will do anything of significance to change the culture of the BART police or delivery anything of value to the community as they collect a substantial fee for themselves.

Listen for yourself. Full audio of the forum is posted below.

Note that the corporate media went AWOL for this second forum, apparently having done all they cared to by partially checking in at the SF forum the day before.
§Oakland City Councilmember Desley Brooks turns around to address the public
by dave id Thursday Jun 25th, 2009 4:33 PM 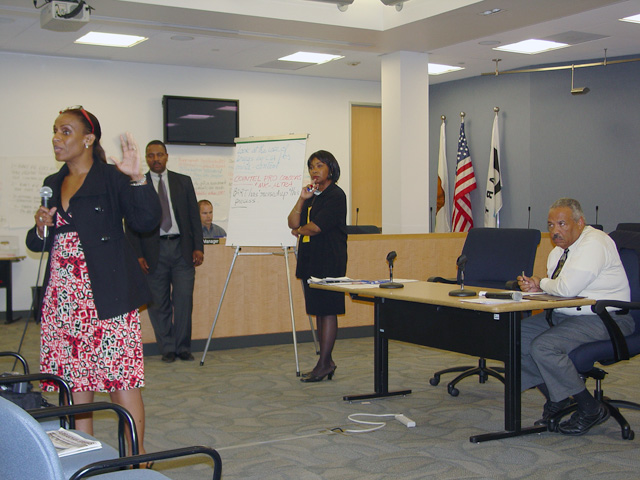 Also pictured (left to right) are NOBLE's Patrick Oliver, BART spokesman Jim Allison, Ramona Tascoe (who volunteered to assist with note-taking), and NOBLE's Robert Stuart.
Add Your Comments
LATEST COMMENTS ABOUT THIS ARTICLE
Listed below are the latest comments about this post.
These comments are submitted anonymously by website visitors.