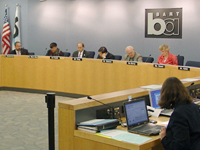 UPDATE: Reports and audio have been posted from BART meetings on May 2nd and May 15th.

After months of pressure for greater transparency in BART policy making by Oscar Grant's family, community members, and activists, BART has scheduled its first public meeting on police oversight for Saturday, May 2nd at 1pm in Oakland. It will be held in the Metro Center Auditorium at 101 Eighth Street, across the street from the Lake Merritt BART station. The official agenda for the meeting includes presentations on various existing models of civilian police oversight and then public discussion on those models. Activists intend to remind BART that they still question if BART even needs its own police force, as well as to continue to demand that General Manager Dorothy Dugger and BART Police Chief Gary Gee be held accountable for their actions after Oscar Grant was shot by BART police officer Johannes Mehserle.

As for civilian oversight of the existing BART police force, BART has made a vague promise to have something in place by the end of the year and has not backed efforts by the California Legislature to assure civilian oversight actually happens via state bill AB312. Activists also intend to push BART on its non-committal to those issues. BART has promised that the May 2nd meeting will be the first in a series of meetings to be held at times and locations convenient for working people but no date yet has been set for the second such meeting.

BART has contracted with the National Organization of Black Law Enforcement Officers (NOBLE) to review its existing police force. It is expected that representatives of NOBLE will be present at the May 2nd meeting. Activists are concerned however that the review by NOBLE may be too small in scope and may not include thorough enough review of issues such as racial profiling by the BART police.

The BART Police Department Review Committee will hold another separate public meeting Monday, May 4th, at 10:00 a.m. in the BART Board Room, on the third floor of the Kaiser Center at 344 20th St. in Oakland.

Recent Related Indybay Features: Victory for Civilian Oversight of Citizen Complaints Against Oakland Police | No Justice No BART Takes Over BART Board Meeting to Press Demands, 4/9/08

Town Hall for Justice on AB312, BART, Orloff Recall, and Caravan for Justice III, Oakland, 4/18/09 | The Police Bill of Rights, Copley, and Where We Are Today in CA with Police Accountability