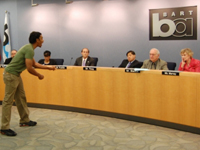 No Justice No BART Takes Over BART Board Meeting to Press Demands
NJNB Presses for Public Meetings and Accountability; Separately, Paint Thrown on BART GM

On Thursday, April 9th, No Justice No BART assumed control of the agenda for the BART Board meeting, which previously had been set to cover the raising of BART fares and the reducing of train service later this year. Demonstrators took turns voicing their objections to the lack of accountability and the apparent cover-up attempts at BART regarding the murder of Oscar Grant. BART's many failures were recounted, including the claims in a recent court filing that exonerated Johannes Mehserle's fellow officers as having been afraid of Oscar Grant and that the murder was merely a "tragic accident." Demands included the firing of General Manager Dorothy Dugger, BART Police Chief Gary Gee, and BART police officer Tony Pirone. NJNB pressed the BART Board over their broken promise to hold public meetings at times convenient for working people in Oakland.

After numerous speakers, a demonstrator independently threw red paint onto BART General Manager Dorothy Dugger. Gabe Meyers was tackled and arrested by police. Gabe reported that he might have to do jail time. Gabe Meyers: Why the paint? (

On Thursday, April 2nd at the MacArthur BART station, No Justice No BART defied the intimidation of two dozen riot police and metal barricades yet again and distributed fliers with campaign objectives to over 1000 commuters coming and going during rush hour. Many riders expressed support during discussions with demonstrators. Some even joined the rally to express their dissatisfaction with BART and its handling of the murder of Oscar Grant.

Town Hall on BART Filing, Orloff Recall, & Caravan for Justice II, 4/4/09 | Remembering Oakland Police Riot & Human Rights Violations - April 7, 2003 | BART claims officers defended themselves against Oscar Grant and not at fault in murder | The BART Board is clueless | Media, Revolution, and the Black Panther Party - An interview with Kiilu Nyasha |