Add an Event
Newswire
Calendar
Features
Home
Donate
From the Open-Publishing Calendar
From the Open-Publishing Newswire
Indybay Feature
Publish to Newswire
Add an Event
Related Categories: East Bay | Police State & Prisons
Contentious and Conversational BART Police Review Committee Public Meeting, 4/20/09: audio
by dave id
Tuesday Apr 21st, 2009 12:55 AM
BART's ad hoc Police Department Review Committee held a public meeting on April 20th in the BART Board room without having made a public announcement about it. Those invested in participating in the process of BART's creation of a citizens' police review commission found out about the meeting via word of mouth after it was mentioned in a legislative hearing in Sacramento on April 14th. BART board members and staff claimed that notice had been posted to the http://www.bart.gov website but no one at the meeting said they had been able to find such a notice. [Apparently, BART didn't post notice of the Monday morning meeting until some time Friday.]
Listen now:
Copy the code below to embed this audio into a web page:
Download Audio (62.7MB) | Embed Audio
(audio 3:02:36)

The meeting began on a contentious note due to the lack of serious public announcement by BART. While it was confrontational throughout, with those in attendance challenging BART Board members and BART staff on their frequent misstatements, defensive posturing, and lack of transparency and progress in establishing true police accountability, the meeting was also conversational much of the time due to the low numbers of the public in attendance and BART's seemingly reluctant acquiescence to many of the repeated common sense demands from the public.

Besides the lack of public notice and the historic BART tendency for secrecy and non-involvement of the public, the BART committee, General Manager Dorothy Dugger, and other staff were confronted for their role in stalling movement forward on AB312 in the California Legislature on April 14th. A representative of State Assemblymember Tom Ammiano was present to scold the committee for their actions regarding AB312 and to warn them that their vague goal of having civilian police review by the end of the year was unacceptable. Additionally, BART was called out on the private meetings they have held with area ministers and others without full community involvement as well as their generally insensitive lack of consideration for the family of Oscar Grant.

BART has a May 2nd public meeting scheduled to present to the public the potential models for the coming BART police review board. It will be held at the Metro Center Auditorium (101 Eighth Street), across the street from the Lake Merritt BART station in Oakland, although the starting time has not yet been determined. There will be a second follow-up public meeting later in May where the public can offer feedback on the various possibilities. Committee members promised to broadly announce these and all future public meetings via prominent placement of notices on their website and through notices in BART stations.

Longer-term items discussed included a public BART memorial for Oscar Grant and some form of restitution and outreach for the youth and citizens of Oakland for the trauma the BART murder and subsequent failures of BART have caused the community.


Apologies for about five missing minutes of the audio near the very end of the meeting (about 2 hours and 51 minutes into the meeting). The missing audio came as the conversation was largely winding down and includes a discussion of a future BART memorial for Oscar Grant. The gap has been indicated with a silence and a brief tone sound.

The next full Board meeting open to the public is this Thursday at 9am at the Kaiser Center 20th Street Mall, Third Floor, 344 20th St., Oakland, CA.
§BART Police Review Committee members and staff present
by dave id Tuesday Apr 21st, 2009 12:55 AM 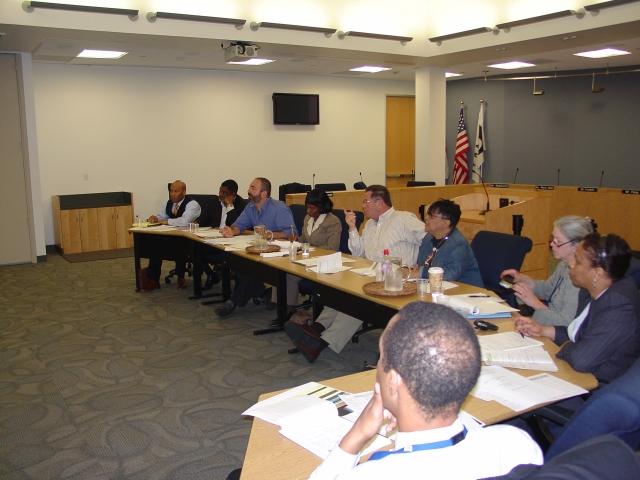 Public attendees included Oscar Grant's godmother, Diana Davis-Marks, Ramona Tascoe of Allen Temple Baptist Church, Oakland City Councilmember Desley Brooks, Assemblymember Tom Ammiano's spokesman Quentin Mecke, Krystof from No Justice No BART and about a dozen or so others.
§New rules for the public at BART Board meetings as of April 17th
by dave id Tuesday Apr 21st, 2009 12:55 AM 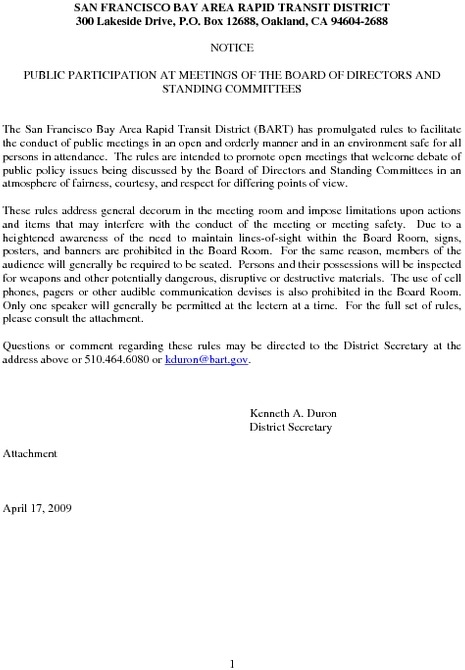 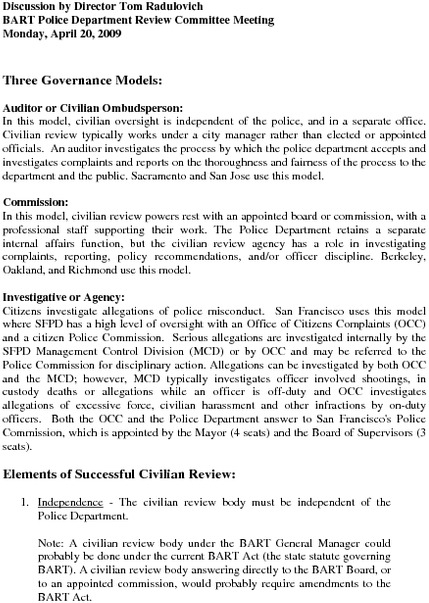 Download PDF (19.9KB)
Add Your Comments
LATEST COMMENTS ABOUT THIS ARTICLE
Listed below are the latest comments about this post.
These comments are submitted anonymously by website visitors.