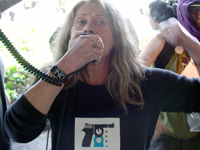 No Justice No BART (NJNB) are holding a series of disruptive actions with the goal of seeking full accountability for those responsible for the abuse and murder of Oscar Grant, including those involved in the subsequent cover-up attempts. After successfully blocking the fare gates at Fruitvale BART in their first demo, NJNB chose the BART station in the upscale Rockridge neighborhood for their second demonstration on March 19th. At Rockridge though, BART's own riot police, or "Tactical Team," didn't wait for the protest to start — they were already set up with chemical and other weapons ready to go and barricades around the escalators before the protest even began. Despite not having completely shut down a station to date, NJNB has been doing community outreach in order to increase the size of the demos at BART stations around the Bay Area until justice for Oscar Grant is reached. NJNB's next action will be at MacArthur BART in Oakland, Thursday, April 2nd at 4pm.

Video | No Justice No BART

Indybay Coverage of First No Justice No BART Fruitvale Demo

See Also: Statement to the BART Board by Retired Employee |

Town Hall Covers Mehserle Case and Recall of Orloff, Oakland, 3/21/09: photos and audio | The Cold-Blooded Murder of Oscar Grant: What Happened the Morning of January 1, 2009 | Aftermath of the execution of Oscar Grant: Everything’s under control | Oscar Grant and Other Victims of Police Violence Need You on Thursday March 19th | NO JUSTICE NO BART - SECOND ACTION scheduled for ROCKRIDGE BART | Oscar Grant event at City Hall cancelled | GET READY TO SHUTDOWN ROCKRIDGE BART! (DIRECT ACTION) ALERT