Remember "Oscar Grant"! Time to jam shit up once again! We've done it before and now we are going to do it again. Don't be afraid of the police. As long as we remember that "the people united will never be defeated", these will always be "our streets". Now is the appropriate time to organize if you want to make a heavy impact on the Bart System. Having a good turn out not only depends on the "NO JUSTICE NO BART organization but "YOU" as well! You can contribute in many ways to make this turn out so large that nobody will get in or out causing the gate to come down once again. It took 500 heads to shut down Fruitvale Bart the first time around and all of that was done by word of mouth and electronic alert/announcements. Now it's time for Rockridge Bart. What happened on New Years Day must never be allowed to happen again which is why now is the time to call all your friends and to invite them to the party that will shut Rockridge BART down on the 19th of March starting at 4pm. This is the only way they'll ever listen; when we put some real pressure on the system to make real changes. Why wait? Call people now. The sooner you tell everyone the more of a chance we'll all have to succeed. If we want to shut it down we are going to need the numbers and that takes proper dedication and preparation for every plan of action. This applies to every struggle on the list of struggles. YOU can be the one to make it happen. You can let everybody know about this direct action event in many ways! 1)...........Posting Myspace Bulletins 2)...........Forwarding by Cell Phones 3)...........Making flyers and handing them out at your school or on the streets of Oakland or posting them out in public. Let's show the Bay Area that the movement for justice against police executions has "NOT" died down! DON'T LET THE MEDIA GET AWAY WITH BURYING THE STORY OF OSCAR GRANTS MURDER BY POLICE! HOPEFULLY SEE YOU ALL THERE! LATE~

Info taken from (NJNB) NO JUSTICE NO BART: "The people have been saying we need to take this to Rockridge BART. We'll update the details as we get closer to the date.... this will be in solidarity with BART station mobilizations throughout the Bay Area that are observing the anniversary of the disastrous War in Iraq and linking issues together. There will generally be an action every Thursday 4-6 pm at a different BART station or at multiple stations. Details will be announced as the date approaches. These actions will continue, and escalate until our demands are met. More details at nojusticenobart.blogspot.com 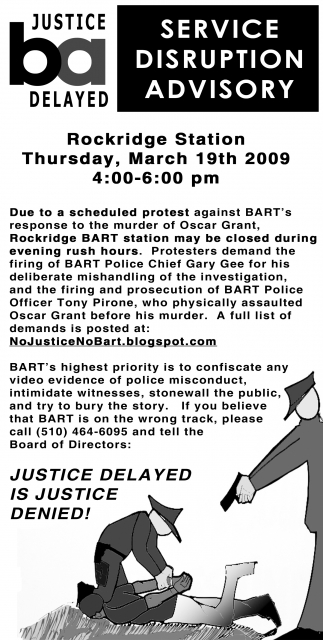 original image (1506x2976)
this is the service disruption advisory flyer...
to hand out to bart passengers primarily
§outreach flyer
by nojusticenobart Monday Mar 16th, 2009 11:49 AM 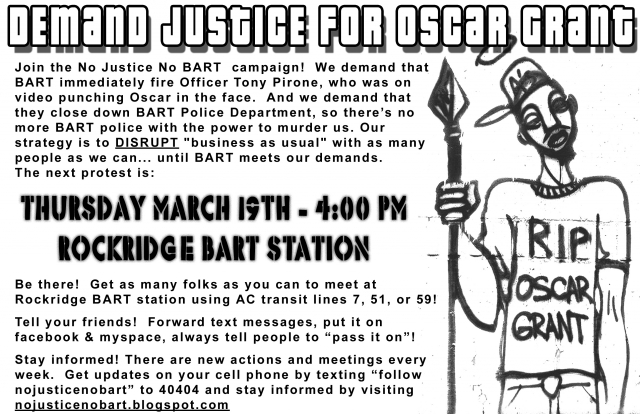 original image (2550x1650)
this is an outreach flyer...
more specifically for folks who might be interested in
working on the campaign or coming to events.
§m19 solidarity
by nojusticenobart Monday Mar 16th, 2009 11:53 AM 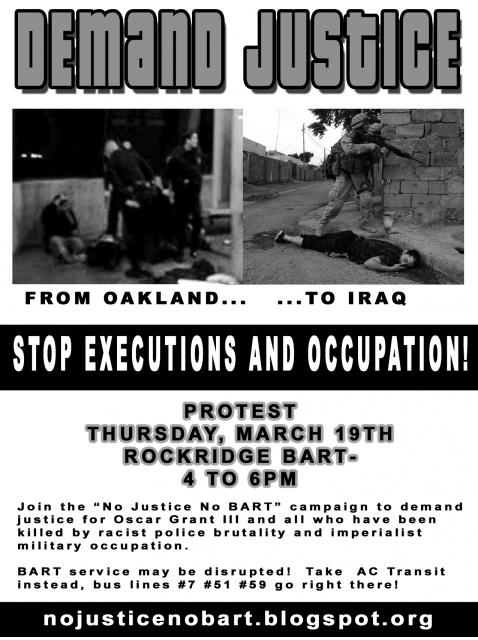 original image (1275x1707)
no justice no bart's March 19th protest is part of a day of actions
happening on March 19th at various BART stations... the day of action was
called by local anti-war groups and the themes at each of these BART stops
will be connecting issues at home to the war. here's a poster we
are putting up.