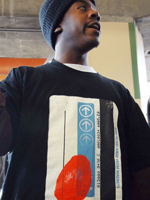 No Justice No BART held their first in a series of actions at the Fruitvale BART station in Oakland on Thursday, March 5th at 4pm. NJNB intends to continue disruptive protests at various BART stations around the Bay until their list of demands is addressed by BART and other authorities. The Fruitvale station was chosen as the first target as it's where Oscar Grant III was murdered on January 1st. While this action was not a complete shut down of the station because police funneled passengers in and out of the station through a back door, demonstrators did block the fare gates at Fruitvale for two full hours, meaning that BART collected no money at the station during the rush hour commute.

Looking back on the first action, Krystof Cantor of No Justice No BART said the demonstration was a success despite the corporate media's focus on protesters not having fully closed the station. He notes that some had objected beforehand to the idea of interfering with the commutes of workers, and in that sense the demo was a win-win in that passengers came and went yet BART collected no fares during the protest and spent extra money on the phalanx of security and riot police they chose to have present. The only loser was BART itself -- appropriate, Cantor noted, as BART and their continuing inadequate response to the murder of Oscar Grant is the target of the No Justice No BART campaign.

The next NJNB action is scheduled for 4pm Thursday, March 19th at the Rockridge BART station in Oakland.
GET READY TO SHUTDOWN ROCKRIDGE BART! (DIRECT ACTION) ALERT

Video | No More "Business As Usual" at BART! Shut It Down To Demand Justice For Oscar Grant! | NO JUSTICE NO BART NEEDS YOU! |

No Justice No BART announces series of BART shutdowns |