Add an Event
Newswire
Calendar
Features
Home
Donate
From the Open-Publishing Calendar
From the Open-Publishing Newswire
Indybay Feature
Publish to Newswire
Add an Event
Related Categories: East Bay | Police State & Prisons | Racial Justice
Town Hall Addresses Lovelle Mixon, Oscar Grant, & the OPD, Oakland, 3/28/09: photos and audio
by dave id
Sunday Mar 29th, 2009 4:52 AM
The Town Hall on March 28th continued to focus on the issue of justice for Oscar Grant and began to address the challenges that have arisen for the community with the shooting deaths of Lovelle Mixon and four Oakland police officers in East Oakland on March 21st.

Family and friends of Oscar Grant are asking for supporters to write 6,000 letters demanding justice for Oscar Grant that they will deliver to President Barack Obama via certified mail. Letters can be left with the family at the next Town Hall for Justice on April 4th.

The next Caravan for Justice to Sacramento will be on April 8th. Organizers hope to double their numbers to one thousand next time in order to press California state legislators on issues such as revising the "Police Bill of Rights" that shields misconduct records from the public, repressive gang laws, reforming the Three Strikes law, dropping the charges against the San Franciscso 8, environmental justice, and other laws and issues that criminalize urban youth and negatively effect communities of color.

Reverend Daniel Buford of People’s Institute West spoke first, offering an opening prayer and words on how the system failed both the police officers and Lovelle Mixon.
Listen now:
Copy the code below to embed this audio into a web page:
Download Audio (3.3MB) | Embed Audio
(audio 9:42)

After the petition to begin a recall that was signed last week is certified by Alameda County authorities, the Town Hall for Justice expects the signature gathering for the recall of DA Orloff to proceed in about two weeks.

Keith Muhammad speaks about the concerns raised by the U.S. military training operations in Oakland known as Operation Urban Shield (related: 1, 2, 3) and the Operation Nutcracker raids at the Acorn apartments in Oakland that involved over 400 police officers of various agencies and included the use of domestic tanks. Jerry Brown approved both and he used the worrisome label of "urban terrorists" to describe those arrested in the Acorn raids. Keith Muhammad goes on to discuss the recent postponement of the pre-trial hearing for Johannes Mehserle to May 18th and the issues that has raised, especially as the new date overlaps the time-frame of the trial for the person charged with killing Oakland Post reporter Chauncey Bailey. He also discusses the immediate public responses from numerous public officials when four police officers were killed but many of the same people have yet to comment on the murder of Oscar Grant.
§Reverend Ramona Tascoe - Allen Temple Baptist Church
by dave id Sunday Mar 29th, 2009 4:52 AM 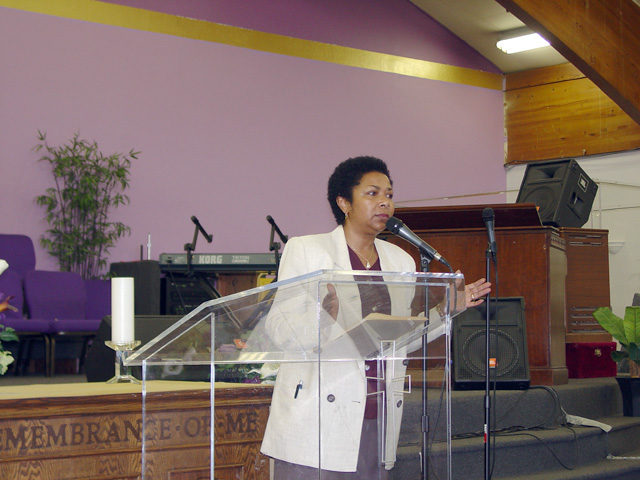 Ramona Tascoe speaks to the movement for justice needing people to shake their Afros and those who are poised to meet with police who may not want to be met with, opening dialogue with those in power, and not being afraid of being arrested as an activist when confronting injustice. No more business as usual.
§Wilson Riles Jr. - former Oakland Councilmember
by dave id Sunday Mar 29th, 2009 4:52 AM
Listen now:
Copy the code below to embed this audio into a web page:
Download Audio (3.3MB) | Embed Audio
(audio 9:39)

Served for 13 years on the Oakland City Council.

Wilson Riles speaks metaphorically about reason needing to have control of the instinctual elephant that it rides.
§Community Comment
by dave id Sunday Mar 29th, 2009 4:52 AM
Listen now:
Copy the code below to embed this audio into a web page:
Download Audio (10.7MB) | Embed Audio
(audio 31:12)

A range of issues are covered by community members who step forward to speak: from helping the friends of Oscar Grant heal, to a man who has been shot by Oakland police on two separate occasions, to the imbalance of outrage and support shown over the deaths of four police officers to that shown for the death of Oscar Grant, to the No Justice No BART campaign, to a frustration with meetings and a desire for more direct actions, to the high murder rate in Oakland.
§Deacon Reggie Lyles - Allen Temple Baptist Church
by dave id Sunday Mar 29th, 2009 4:52 AM 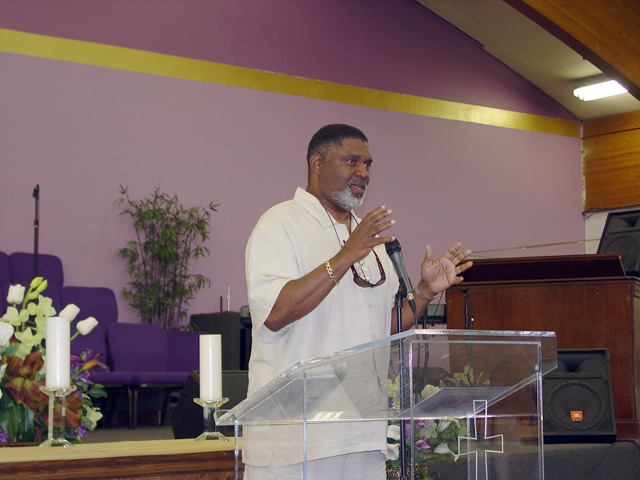 Served for 30 years in law enforcement.

Reggie Lyles speaks to the fear that many police officers have of African American youth and defensive behavior strategies that can be used to defuse tensions with police during traffic stops and the like.
§Wanda Johnson - Oscar Grant's mother
by dave id Sunday Mar 29th, 2009 4:52 AM 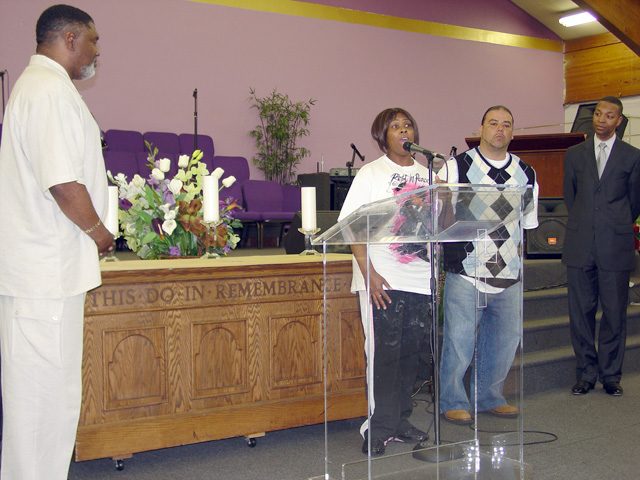 Wanda Johnson thanks everyone for their support. She says she raised Oscar Grant to be respectful to authority, but now she's not sure if she should tell her nephews of similar age to do that or just run when police are so prejudiced and violent with people in the community. She also confronts those from the community who have "made it" and then don't come back to help others who haven't "arrived" yet. People have to come together as a community.
§Minister Christopher Muhammad - Nation of Islam
by dave id Sunday Mar 29th, 2009 4:52 AM 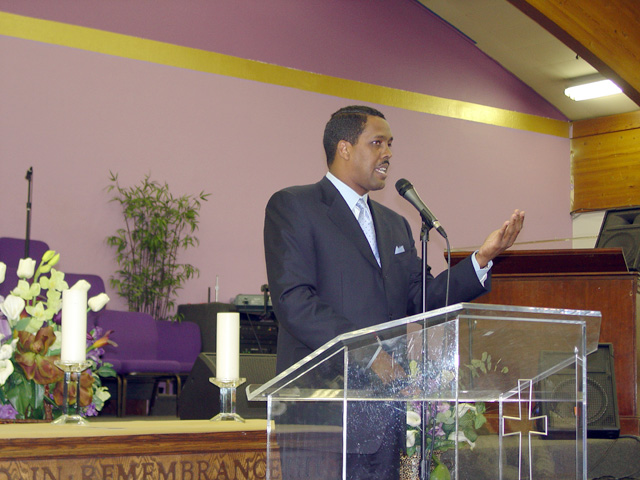 Christopher Muhammad discusses the thousands of lives cut short by injustice and the community's duty to ensure their survival. "I am Oscar Grant" speaks to the fact that what happened to Oscar Grant can happen to too many people. He goes on to address the very real possibility that politicians and others in power might use the deaths of the four Oakland officers to rush through new legislation that unfairly targets communities of color, just as nationally politicians exploited the 9/11 tragedy to invade Iraq. He says that those who were silent when Oscar Grant was killed should shut their mouths now, and he admonishes the clergy who selectively supported the prayer vigil for the four officers and did not pray for Oscar Grant and his family, as if Oscar Grant's life was less valuable or his death less outrageous. He goes on to talk about how 1 in 3 African American men in California is under some form of court authority and a traffic stop for African Americans is not the same routine thing it might be for others. He calls into question the "corrections" that are supposedly happening in the prison system and that it needs to be examined in light of the hopelessness and downward spiral it creates. He says the community needs to keep an eye out for vigilante-type moves by police by looking for any increases in arrests and detainments following the deaths of the four officers last Saturday. Effective organization for justice is necessary. "Armchair revolutionaries never won nothin'."
§Willie Radcliff - publisher of the San Francisco Bayview
by dave id Sunday Mar 29th, 2009 4:52 AM 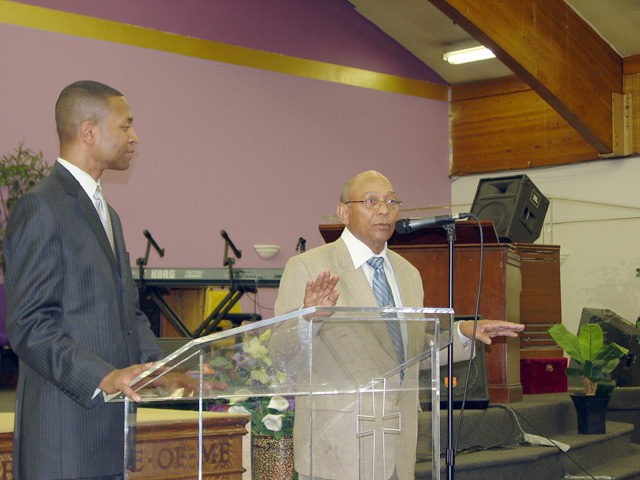 Willie Radcliff speaks to the importance of working for economic opportunities along with the fight for justice for victims of police.
§Diana Davis-Marks - godmother of Oscar Grant
by dave id Sunday Mar 29th, 2009 4:52 AM 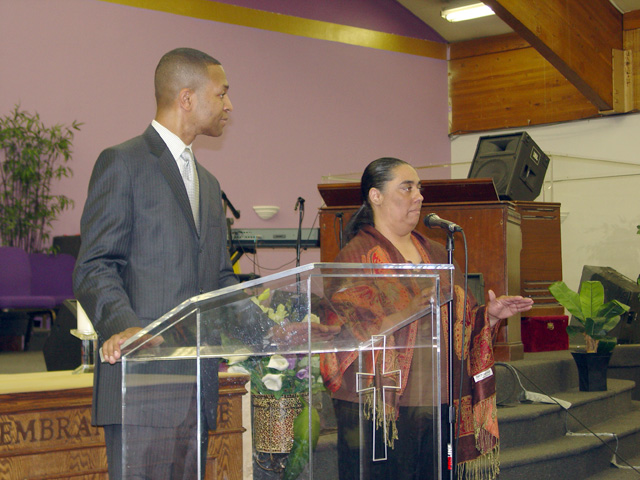 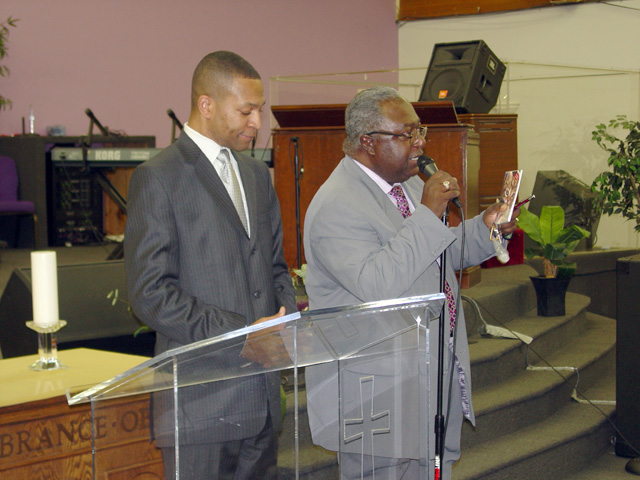 Diana Davis-Marks announces that family and friends of Oscar Grant are asking for supporters to create 6,000 letters for President Obama demanding justice for Oscar Grant. People can bring their letters to the next Town Hall for Justice. They can be contacted at WeCanItDone [at] gmail.com.

Bishop Smith closes the event with a prayer.
Add Your Comments
Support Independent Media
We are 100% volunteer and depend on your participation to sustain our efforts!