The Glacial Pace of BART Oversight

Yesterday was the Public Safety Committee hearing for Assemblyman Tom Ammiano's proposed bill (AB 312) that would require the BART Board to create a civilian oversight committee.

It didn't fail either, though.

Nope, the vote was postponed indefinitely. Why?

Because folks from the BART Board showed up to give the impression that they are moving ahead with creating an oversight committee of their own. And that they are working with Ammiano's office to do so - which is total lie.

Allow me to walk you through this fuckery:

Remember that the shooting of Oscar Grant took place on New Year's Eve. Immediately there were calls for (1) an investigation, and (2) a new body to oversee police misconduct. As it stands, complaints about the BART police are handled by...the BART police.

More than a month later, on March 24, a few BART Board members got around to meeting with Ammiano to discuss AB 312.

On March 26, the folks who visited Ammiano reported back to the full board that something must be done. Oh and this direction was given by board president Tom Blalock: "I'd like to ask the staff to put together some sort of a summary that identifies the different types of oversight." Because, you know, we should START becoming familiar with the different types of oversight.

Yeah. Yeah, that might be a good idea. Uh-huh. [Hand sliding down face.]

Also at the March 26 meeting, they discussed whether to take a stand on AB 312. Apparently, coming up with a position on this proposed law (which had been around for six weeks and is aimed directly at the BART Board) was way too taxing, so they agreed to put "What do we think of AB 312?" on a later agenda. (No, it hasn't come up yet.)

Now comes the April 9 BART Board meeting and here's what board member Carole Ward Allen said about the issue of oversight: "The (super-secwet police review) committee met this week to continue the discussion and we are thinking of having a civilian oversight committee." Yay! Another committee!! Oh, wait. We're just thinking about it. It's only April.

Then on April 13 (the day before AB 312 is set to be heard by the Assembly Public Safety Committee) the police committee writes a letter to our representatives in Sacramento saying: we're on top of this. We've got a (super-secwet) police committee and starting in May, we're going to hold public meetings to discuss how to structure an oversight body. (Download Bay Area Delegation.)

According to the letter, "Our goal is to adopt a civilian oversight structure this year" - this year!?! Don't hurt yourselves with all that.

Apparently, this was good enough to prevent a vote on AB 312. It is not clear how or when the bill can be brought back up.

Incidentally, I'm told Fiona Ma is on that Public Safety Committee and didn't say a word.

NOTE THAT THE (SUPER-SECWET) POLICE REVIEW COMMITTEE WILL MEET ON MONDAY, APRIL 20 AT 10 AM ON THE 23RD FLOOR OF BART HQ! (300 Lakeside Drive, Oakland) SPREAD THE WORD - 'CAUSE THEY'RE NOT GONNA!

You can see the video and transcripts that I'm quoting from here on BART's website.

http://www.thesweetmelissa.com/sweet_melis...
§Dorothy Dugger, Gary Gee, and friends assure legislators that they are on it -- this year
by download Wednesday Apr 15th, 2009 9:44 PM 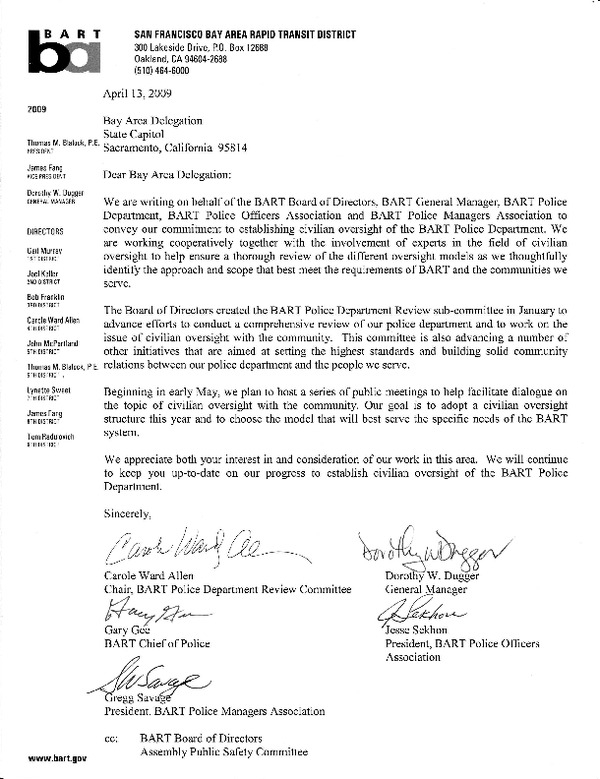 Download PDF (583.2KB)
Nice -- basically, BART is saying here that their goal is "to adopt a civilian oversight structure THIS YEAR and to choose the model that will best serve the specific needs of the BART Board of Directors, BART General Manager, BART Police Department, BART Police Officers Association and BART Police Managers Association." Just trust them, they say.
Add Your Comments
LATEST COMMENTS ABOUT THIS ARTICLE
Listed below are the latest comments about this post.
These comments are submitted anonymously by website visitors.