Add an Event
Newswire
Calendar
Features
Home
Donate
From the Open-Publishing Calendar
From the Open-Publishing Newswire
Indybay Feature
Publish to Newswire
Add an Event
Related Categories: East Bay | Racial Justice
NOBLE Honors Rashidah Grinage and PUEBLO at Awards Dinner, Oakland, 4/24/09: audio
by dave id
Saturday Apr 25th, 2009 2:40 PM
The San Francisco Bay Area chapter of the National Organization of Black Law Enforcement Executives (NOBLE) held a 3-day training conference with various workshops at the Oakland Airport Hilton hotel. The theme of the conference -- "An injustice anywhere, is a threat to justice everywhere" -- is from Dr. Martin Luther King Jr.'s Letter from Birmingham Jail, written on April 16, 1963, while King was being imprisoned for his part in a civil disobedience protest against racial segregation.

On April 23rd, 2009, the Board of Directors of BART unanimously chose NOBLE to conduct a "top to bottom" review of the BART Police Department. BART Board and Police Department Review Committee member Lynette Sweet of Oakland said, "What we really liked about NOBLE’s proposal is that the organization truly demonstrated it understands the value of engaging the community in the process while at the same time it showed it has the expertise to conduct a comprehensive top to bottom review of our police force." The review is set to last four months and examine BART police culture, recruitment, training, policies, and investigatory practices. Recommendations will be made by NOBLE. BART has its first public meeting to review civilian police oversight models scheduled for Saturday, May 2nd at 1pm in Oakland.

On April 24th, as a part of the training conference, NOBLE held an awards dinner to honor Bay Area activists and civil servants with community service awards as well as to pay tribute to notable achievements within their own ranks. Audio of three of the speakers is featured here. First is NOBLE National President Joseph McMillan, introduced by Dave Clark of KTVU, who MCd the awards dinner. Joseph McMillan -- speaking to the theme of the NOBLE conference and the recent deadly violence between police and civilians across the nation, including the BART shooting death of Oscar Grant on January 1st and the deaths of Lovelle Mixon and four Oakland police officers on March 21st -- declares that "injustice by law enforcement officials breeds injustice."
Listen now:
Copy the code below to embed this audio into a web page:
Download Audio (4.9MB) | Embed Audio
(audio 14:17) 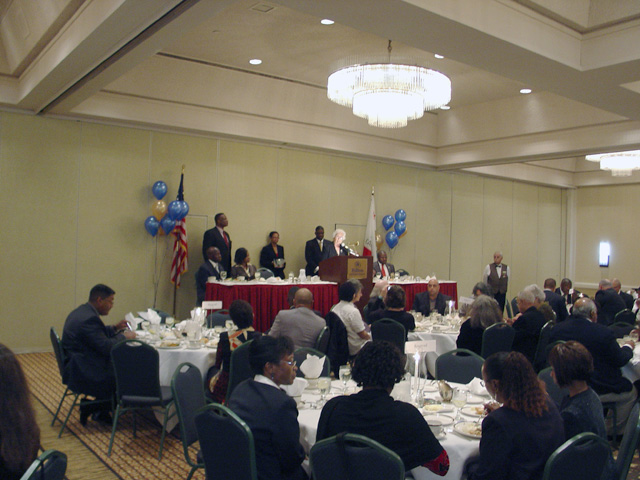 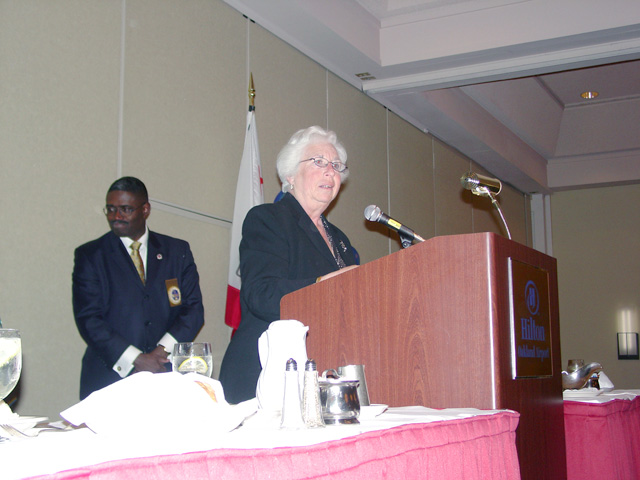 Rashidah was introduced by Lt. Johnny Davis, OPD, after Joseph McMillan spoke in first audio clip posted above (at 9 minutes 40 seconds in).

While she did not speak about it at the awards dinner, Rashidah Grinage is currently asking for public support at the Oakland City Council Public Safety Committee hearing on Tuesday, April 28th. PUEBLO will propose that the OPD Internal Affairs department be civilianized and that all citizen complaints against OPD go to the Citizen's Police Review Board:
http://www.indybay.org/newsitems/2009/04/23/18590987.php

Alameda Superior Court Judge Brenda Harbin-Forte speaks about what is means to be an African American law enforcement officer and assuring equal justice under the law.
§Joseph McMillan, near the end of the dinner, speaks about the BART Police review contract
by dave id Saturday Apr 25th, 2009 2:40 PM
Listen now:
Copy the code below to embed this audio into a web page:
Download Audio (298.1KB) | Embed Audio
(audio :50)
§BART's official announcement of selection of NOBLE for BART police review
by dave id Saturday Apr 25th, 2009 2:40 PM
04.23.2009

Today the BART Board of Directors unanimously selected an organization to conduct a comprehensive top-to-bottom review of the BART Police Department following the January 1, 2009, officer-involved fatal shooting on the Fruitvale BART Station platform.

"The National Organization of Black Law Enforcement Executives (NOBLE) will look into all aspects of the BART Police Department," BART Board Member Carole Ward Allen said. Ward Allen chairs the Board’s newly created BART Police Department Review Committee whose aim is to provide greater focus on the exercise of BART Police responsibilities and, among other things, assist the full Board in establishing civilian oversight of BART Police. "This is the latest in a series of significant steps we’re taking to ensure a similar incident does not occur again," Ward Allen said. The review should take approximately four months and the cost of the contract is $127,688.


WHAT NOBLE WILL DO:

The review will provide an independent assessment of the fundamental aspects of BART Police including but not limited to:

* Training and equipment, including use of force, conduct of investigations, diversity, cultural awareness and sensitivity and avoidance of racial profiling

* Policies and procedures to determine if they are comprehensive, reflect best practices and are effective in directing a professional, well-regarded and trusted police force

"The goal of the study will be to provide BART with evaluation results and recommendations that will help us identify any changes we need to make to ensure the BART Police Department is structured and administered effectively and that the department follows the industry’s best practices as appropriate in the environment in which BART operates," Joel Keller, Vice Chair of the BART Police Department Review Committee said.

As part of this process, NOBLE proposes a community engagement methodology that is designed to bring law enforcement and concerned citizens together to identify community concerns and apply principles of community policing to create a shared vision and joint strategy to address concerns.

"What we really liked about NOBLE’s proposal is that the organization truly demonstrated it understands the value of engaging the community in the process while at the same time it showed it has the expertise to conduct a comprehensive top to bottom review of our police force," BART Board Member Lynette Sweet said. Sweet sits on the committee and was one of the members who helped evaluate proposals for this contract. "This study will provide us with findings and recommendations that will get the job done in four months at which time we’ll know what our police do well and what they need to do to improve."

NOBLE was founded in September 1976. NOBLE is committed to conducting research and sponsoring programs that lead to the formation of policies and procedures to improve the delivery of law enforcement services. NOBLE has a long history helping numerous police departments across the country with issues including:

* Use of force policies


OTHER STEPS THAT BART HAS TAKEN SINCE THE SHOOTING

Since the officer-involved shooting, BART has been conscientiously working to ensure that a similar incident does not occur again. Some of the major steps BART has taken include:

* Completing criminal investigation: On January 12, 2009, BART Police completed the criminal investigation of now former officer Johannes Mesherle and turned the matter over to the Alameda County District Attorney’s Office. The DA filed murder charges against Mehserle and his preliminary hearing is May 18, 2009.

* Establish civilian oversight for the BART Police Department: The Committee has been reviewing the different civilian oversight models to determine what is best suited to BART and the communities it serves. That work will accelerate in May when BART begins to hold public forums to solicit input on a model. In addition, there’s legislation in Sacramento that would require BART to create civilian oversight for its police force. On April 13, 2009, the Chair of the BART Police Department Review Committee on behalf of the Board, the General Manager, Chief of Police and the Presidents of the two BART police associations, signed a joint letter to the Bay Area legislative delegation assuring them of BART’s intention to create civilian oversight of BART Police and to assure the delegation that BART is actively working toward that goal. 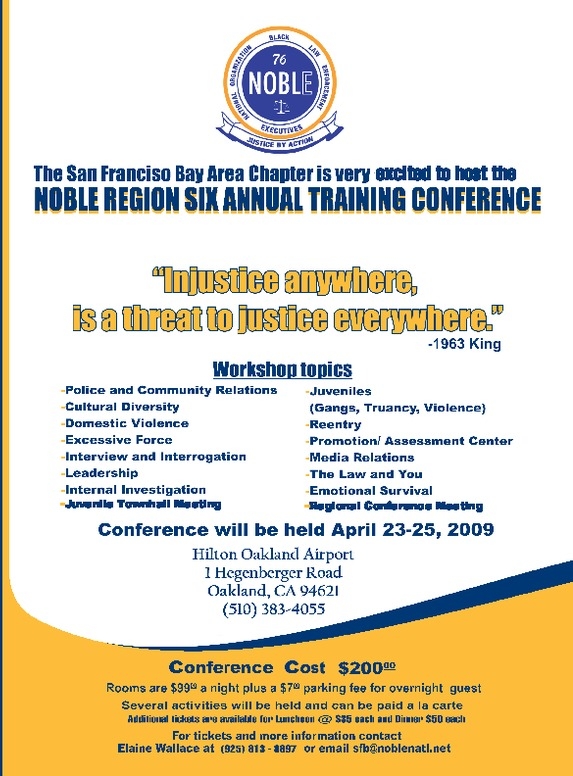 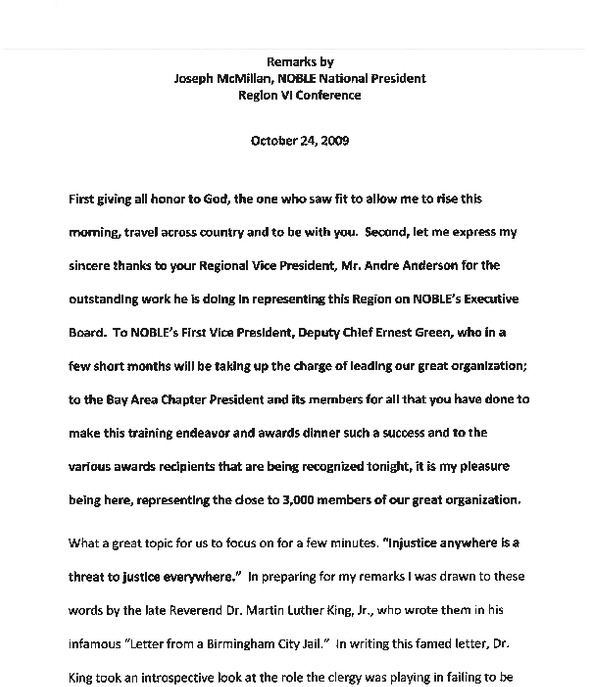 Download PDF (184.1KB)
Add Your Comments
LATEST COMMENTS ABOUT THIS ARTICLE
Listed below are the latest comments about this post.
These comments are submitted anonymously by website visitors.