Add an Event
Newswire
Calendar
Features
Home
Donate
From the Open-Publishing Calendar
From the Open-Publishing Newswire
Indybay Feature
Publish to Newswire
Add an Event
Related Categories: East Bay | Police State & Prisons | Racial Justice
BART public meeting on Saturday, May 2nd to review civilian police oversight models
by dave id
Thursday Apr 23rd, 2009 4:35 PM
BART finally has a public meeting scheduled that working people can attend. It's scheduled for Saturday, May 2nd, at 1pm. It will be held at the Metro Center Auditorium (101 Eighth Street), across the street from the Lake Merritt BART station in Oakland.

It's taken a lot of pressure over the last several months from Oscar Grant's family, community members, and activists to get to this point, so keep the pressure on by showing up and holding BART's feet to the fire. Tell them that vague promises about having civilian police review set up by the end of the year are not good enough. Tell them they need to support AB312 now before the bill dies in a state legislative committee. Tell them that not holding (at least) Tony Pirone, Gary Gee, and Dorothy Dugger to account is unacceptable.

Study up on what you can find before the meeting -- so that when you do go in, you can give them an educated earful and not let them give you the run around with their typical excuses. Attend whatever meetings you can beforehand with groups committed to justice for Oscar Grant (No Justice NO BART, Town Halls, etc). Let the BART Police department Review Committee know that all decisions they make from here on out must be discussed in public well ahead of time and that they will not be allowed to creep back into their comfortable secrecy hole, pretending that public input doesn't matter or is just an afterthought.

And, remember, while potential police oversight models are discussed on May 2nd, it remains an open question as to if they even need their own police force at all. It's the people's time to seize the agenda and establish community demands as BART policy -- don't let them box in what can and can't be done without real community involvement. The days of BART dictating to the public are over if enough people stay involved for the long haul. 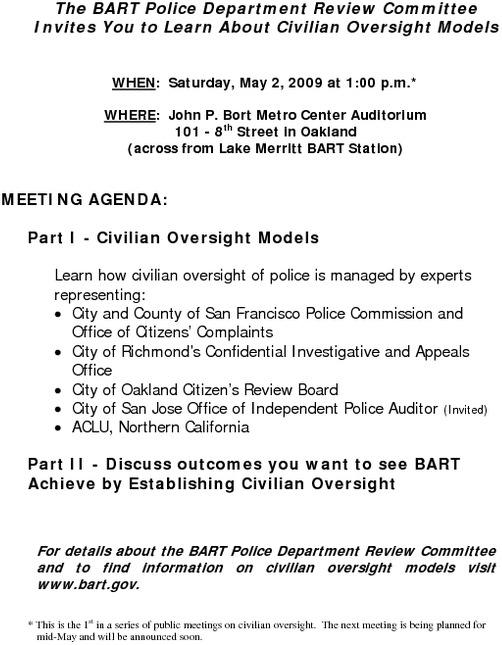 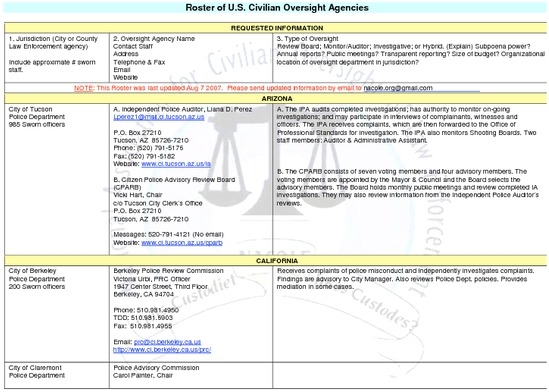 Oakland's Citizen's Police Review Board is on page 3, as is Richmond's Police Review Commission. San Francisco's Office of Citizen Complaints is on page 4, as is San Jose's Independent Police Auditor.
http://bart.gov/news/articles/2009/news200...
Add Your Comments
LATEST COMMENTS ABOUT THIS ARTICLE
Listed below are the latest comments about this post.
These comments are submitted anonymously by website visitors.