Add an Event
Newswire
Calendar
Features
Home
Donate
From the Open-Publishing Calendar
From the Open-Publishing Newswire
Indybay Feature
Publish to Newswire
Add an Event
Related Categories: San Francisco | Police State & Prisons | Racial Justice
Disappointing NOBLE Community Forum for BART Police Review, San Francisco, 6/22/09: audio
by dave id
Tuesday Jun 23rd, 2009 12:57 AM
Three months after the murder of Oscar Grant, the National Organization of Black Law Enforcement Executives (NOBLE) was hired by BART to do a "top to bottom" review of the BART police department. As a part of their ongoing review, NOBLE held what was purported to be a community forum on June 22nd at the Mission Cultural Center for Latino Arts in San Francisco. NOBLE's report to BART is due in about three months.

Judging by their first community forum, NOBLE appears to be almost as afraid of the public as the BART police -- and more interested in garnering positive corporate media for themselves than holding a true community forum. NOBLE likes to refer to themselves as the "conscience of law enforcement," but anyone who expected them to act as such in this limited interaction with the public was sure to be disappointed. 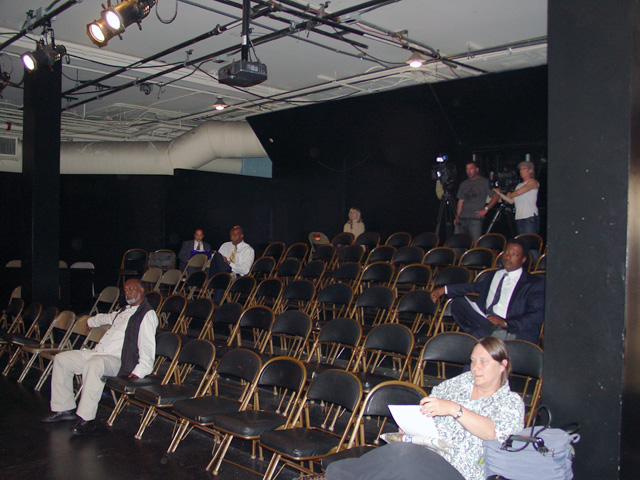 First, NOBLE did its very best to make sure that the community wasn't even aware of the forum, as can be seen in the above photo which depicts two community members present in the main seating area (in the front row) when the forum began, along with (clockwise from top left) a BART spokesperson Jim Allison, a BART lawyer, two corporate media people, BART videoperson, and a NOBLE representative. A handful of community members were seated in a section to the right, not pictured, and about a half dozen or so more community members arrived late. After being confronted on the lack of public notice for the forum, NOBLE said they had notified local politicians and corporate media, had sent an email to a list of community activists BART maintains, and posted a notice on BART's website. The corporate media was obviously notified in order to generate press coverage of the forum after the fact as they rarely act as a community calendar and announce upcoming BART meetings or forums. Perhaps it was supposed to be up to the politicians and those on BART's police oversight email list to make the announcements NOBLE should have had in BART stations and other public venues. At any rate, it was not surprising that no more than 15 members of the public were present at the meeting, while NOBLE had at least four representatives present and BART had at least three media relations staff present to offer their spin on the forum to the four or five corporate media people present. A BART lawyer was present throughout, and a BART police union representative was in attendance until his presence was called out by a community member who recognized him (this being after NOBLE declared at the onset of the forum that BART representatives were asked not to attend, neglecting to mention the room was full of BART employees).

In another display of fear of the public, supposedly an unruly public, as soon as community members walked in the door they were handed a one-page print-out with rules and parameters for the feedback NOBLE wanted. This insulting document included such recommendations as using "I" statements and being courteous. Numerous community members objected to the very nature of NOBLE's "guidelines" when the purported intention of the forum was to give the community an authentic voice in NOBLE's review of the BART police department, not to box in community opinion.

NOBLE -- having now attached themselves to BART's problems with its police force, as one community speaker pointed out -- got an earful for the better part of two hours on what the community thinks of BART police and NOBLE's review. Many speakers doubted the sincerity of NOBLE in truly evaluating BART police rather than just adding another layer of public relations spin. Several others called for BART police to be disarmed, or disbanded all together, noting that better supervised and trained police forces in the localities BART serves could do the same job. BART police history of harassment of people of color in the East Bay was called out loud and clear, as well as the origins of BART itself as a means to enable white flight from San Francisco and Oakland in the 1960s and 1970s. What significance NOBLE would give public comment in their review was also called into question.

In NOBLE's introduction of themselves to the community, NOBLE came off as aloof and condescending, continually spending as much or more time directing the shape of public comment as actually listening to what the community had to say. In fairness to NOBLE, at the conclusion of this first "public" forum, NOBLE acknowledged their misstep with the guidelines handout, promising to do better in the future, and they assured those in attendance that public feedback would be seriously considered as a part of their review of the BART police department. If this proves itself to be true at the Oakland forum on June 23rd and beyond remains to be seen. Early signs were not encouraging.


Listen for yourself. Full audio of the forum is posted below.

§NOBLE representative Patrick Oliver introduces the forum and tells the public how it's gonna be
by dave id Tuesday Jun 23rd, 2009 12:57 AM 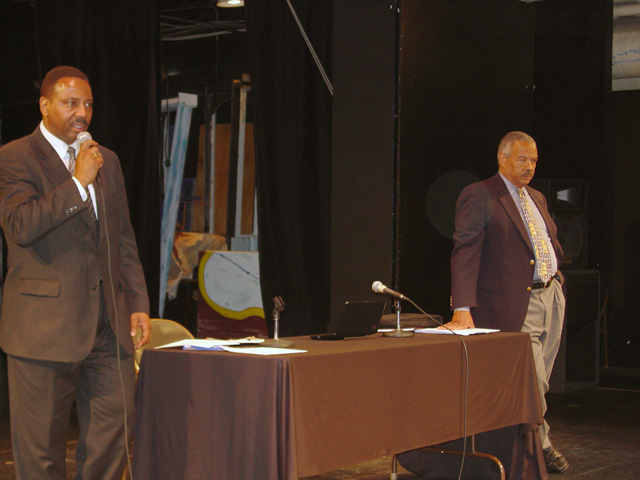 The public refused to follow NOBLE's "guidelines" by sticking to 2-minute comments or using "I" statements.
§NOBLE's incomplete notes from public comment at the forum
by dave id Tuesday Jun 23rd, 2009 12:57 AM 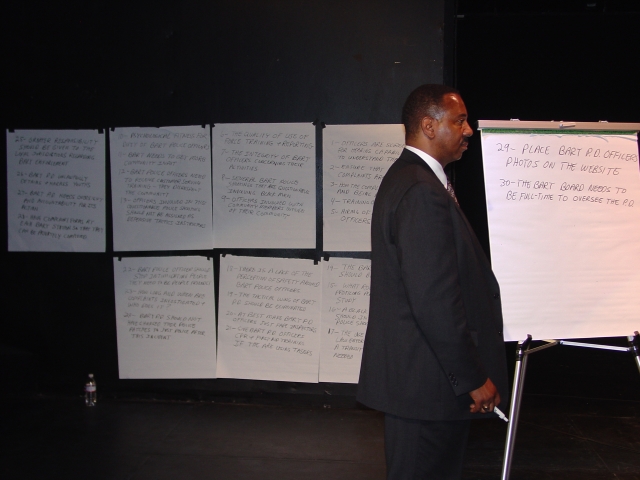 original image (2592x1944)
Click on image above for larger, more legible version of notes. Listen to the audio below to hear what didn't make it into the notes.
§Full audio of San Francisco NOBLE forum on BART police review
by dave id Tuesday Jun 23rd, 2009 12:57 AM
Listen now:
Copy the code below to embed this audio into a web page:
Download Audio (47.2MB) | Embed Audio
(audio 2:17:20)

Note that most of the corporate media left after about an hour, so reports they put out will likely be based only on what they heard early on in the forum, or from statements made by the main BART media representative present.
§NOBLE's insulting community forum guidelines
by dave id Tuesday Jun 23rd, 2009 10:59 AM 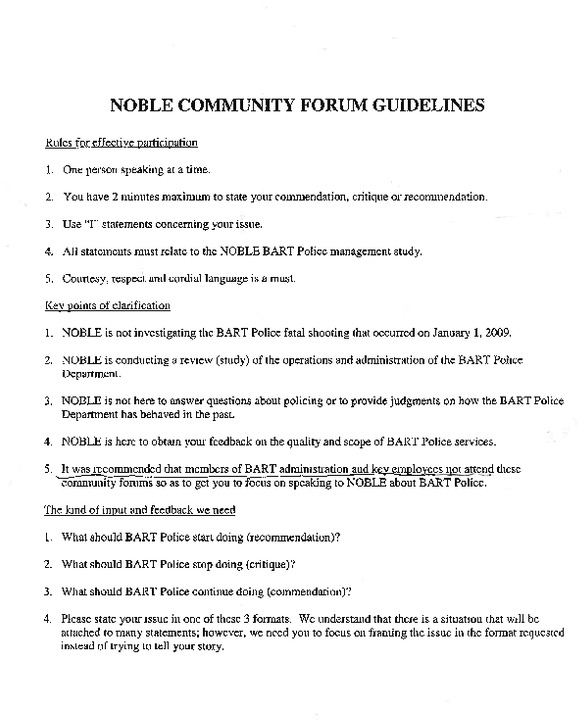 Download PDF (30.8KB)
NOBLE urgently stuck a copy of this into the hands of every member of the public as soon as they walked in the door. Not satisfied that the handout in and of itself was adequate, NOBLE then proceeded to read their "guidelines" out loud for the first ten minutes of the forum.

Note that nowhere in this document is there a reference to any potential benefit for the public for participating in this forum or gratitude for community attendance. Remember that NOBLE is being paid quite well for conducting their review ($128,000 over four months) and community members are attending meetings and forums such as this on their own time.

Also, note that "key point" number five was completely misleading -- it reads that BART employees were "recommended" to not attend, but no mention was made as these rules were read aloud that there were numerous BART employees actually present at the forum, including Jesse Sekhon, President of the BART Police Officers' Association union, and a BART spokesperson who was invited by NOBLE to spin the event for the corporate media. Never mind the thoughtless and condescending language such as "so as to get you to focus" -- it would probably be too much to ask for better, more sensitive and more appreciative wording.
§NOBLE Improves Their People Skills for 2nd Community Forum on BART Police, Oakland, 6/23/09
by dave id Thursday Jun 25th, 2009 5:09 PM
Audio from the second forum can be found at
http://www.indybay.org/newsitems/2009/06/2...
Add Your Comments
Support Independent Media
We are 100% volunteer and depend on your participation to sustain our efforts!