Add an Event
Newswire
Calendar
Features
Home
Donate
From the Open-Publishing Calendar
From the Open-Publishing Newswire
Indybay Feature
Publish to Newswire
Add an Event
Related Categories: East Bay | Police State & Prisons | Racial Justice
BART Chooses Oversight Model & Ties Board's Hands with Supermajority, 6/15/09: pdf & audio
by Andrew Stelzer, spot.us
Wednesday Jun 17th, 2009 9:06 AM
Being on this beat, I ended up on June 15th at a meeting of the BART Police department subcommittee, who are talking about developing a citizens review committee for BART police. Its a really important process, and it's in direct reaction to the killing of Oscar Grant.

Below is the first piece of three from the full audio of the meeting here:
Listen now:
Copy the code below to embed this audio into a web page:
Download Audio (20.4MB) | Embed Audio
(audio 59:21)

Here's a basic summary of the meeting, broken down by committee member. By reading them all, you should get an idea of what happened:

Lyles--said the key result of this process has to be inspiring confidence in the people who the BART police serve. With this in mind, he submitted to the committee a ‘hybrid’ model—something of a compromise between the 2 options that were being considered at the previous meeting.

Sekhon-- questioned why discipline was becoming central to the discussion. He said he thought that that point of having civilian oversight was to make the department transparent and find out the truth, not to have civilians involved in the discipline process.

Lyles--responded that the police union would have to give up something. This committee was not meeting in a vacuum, but because of ‘an incident’ (referring the killing of Oscar Grant).

Casimere—said he believes the BART police chief should be kept out of the discipline process. He said he thinks that the committee needed to hear from the police chief before coming to a decision on what form of oversight to create.

Dugger--objected to part of the hybrid proposal that allowed up to one year for an investigation and resolution to conclude. (Under California state law, discipline must be handed out within 1 year).

BART Police Chief Gary Gee was then asked for his input; he said he had a problem with all the plans being considered today, because he questions citizens’ ability to judge an officers intentions.

Then BART Board of Directors member Joel Keller, who is not a member of this committee, came up and presented his own proposal, building on the hybrid model being discussed. (See attachment with headline ‘REVISED DISCIPLINARY PROCESS’)
The basic complaint process would be as follows:
1. Police auditor investigates complaints filed by citizens.
2. Auditors findings, including recommendations for action, or dismissal, submitted to Citizen Board for review. If Citizens Board agrees, report is submitted to Chief of police who will carry out recommended action.
3. If chief disagrees with recommendation, he can appeal to BART General Manager
4. If Citizens Board disagrees with Auditors findings, they try to reach a consensus with auditor. If they can’t reach agreement, they appeal to Chief of police. Chief decides.
5. If Citizens Board disagrees with Chief’s decision, they appeal to the BART general manager. GM then decides and Chief carries out decision.
6. If Citizens board disagrees with General manager with a 2/3 super majority, they appeal to BART Board of Directors. BART Board of directors requires a 2/3 super majority for approval. Boards decision is final and will be carried out by chief.

Quinton Mecke from State Legislator Tom Ammiano’s office, commented that requiring a supermajority of BART Board members to approve a discipline recommendation was too much. Significant discussion followed on the 2/3rds supermajority issue.
It was pointed out by Keller and Sekhon that under California state law, public safety officers have a property right to their job, and so a high standard must be met to fire them. They wanted the 2/3rds supermajority.

Sweet and Radulovich were the only 2 committee members that seemed resistant to the supermajority, and Sweet soon agreed to it. In the end, the committee took a straw poll, and voted 6-1 to go ahead with the proposal submitted by Keller, with a few minor changes. Radulovich voted no, and Casimere had already left by the time of the vote.

Keller’s proposal called for only 120 days for the auditor and/or citizen’s board to conclude their process, or else it would be turned over to the chief. The committee thought this was too short, and changed it to 180 days. There were a few other minor changes to Keller’s proposal, but the committee as a whole supported it.

The committee will be meeting Wednesday June 17th at 10AM. At that meeting, they will discuss several issues, including:
--When to schedule a public meeting to get feedback on the proposal for civilian oversight.
--Who will hire the independent auditor who will do the investigations of citizens’ complaints? What role will the oversight committee have in that hiring process?
--Who will choose the committee?
--What is the role of the citizens committee in hiring and disciplining the BART police chief, since he himself is one of the potential levels of appeal? 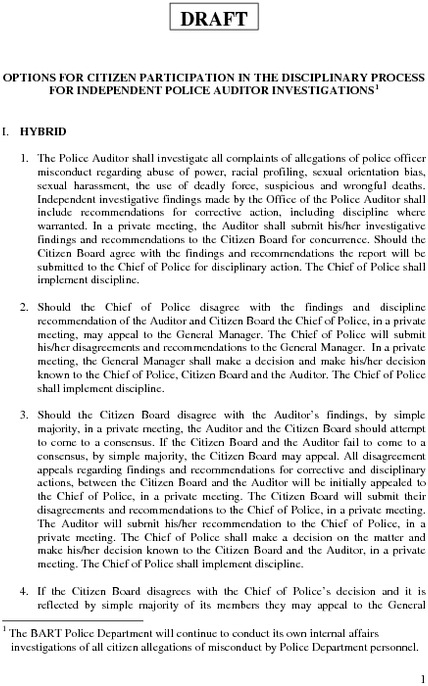 Download PDF (27.9KB)
(4-page PDF)
http://spot.us/pitches/202/posts/80
Add Your Comments
LATEST COMMENTS ABOUT THIS ARTICLE
Listed below are the latest comments about this post.
These comments are submitted anonymously by website visitors.