Add an Event
Newswire
Calendar
Features
Home
Donate
From the Open-Publishing Calendar
From the Open-Publishing Newswire
Indybay Feature
Publish to Newswire
Add an Event
Related Categories: East Bay | Police State & Prisons | Racial Justice
BART Police Oversight Vs. Every Cop Union in the State; Police Chief Gee Out; and a Rumor
by dave id
Tuesday Aug 18th, 2009 12:41 AM
Just three days after the proposal was forwarded from the subcommittee on police oversight, the BART Board of Directors voted unanimously on Thursday, August 13th, in favor of submitting the new police oversight plan to the California legislature for approval. As legislators debate the plan's merits, or lack thereof, it is certain to be vehemently resisted by every police union in the state, as the Peace Officers Research Association of California (PORAC) has already threatened. The BART Board is currently lobbying legislators to pass the proposal, and undoubtedly statewide police representatives are lobbying for rejection of the plan. BART is hoping that the Board's unanimous support for the proposal will be enough to serve the police unions a rare defeat in the state legislature. 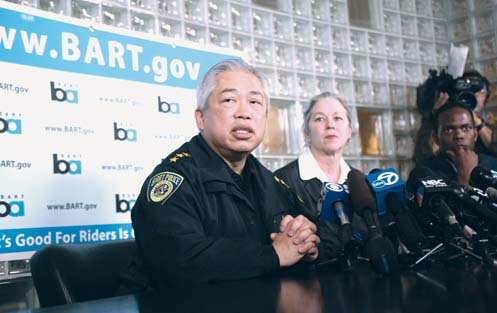 Over the weekend, as BART negotiated with its own labor unions to avoid a strike that would have shut down BART on Monday, Police Chief Gary Gee announced that he will be retiring from the force by December 30th of this year, two days short of the first anniversary of the murder of Oscar Grant.

The removal of Chief Gee has been a top priority for community activists since January after he declared in a press conference that all of the officers on the Fruitvale platform when Oscar Grant was murdered acted professionally and according to protocol. He said this despite having seen a high-quality video with audio and accounts of numerous eye-witnesses to the contrary. Chief Gee has failed to discipline a single officer for misconduct related to the murder on New Year's Day. It might be one of his very last acts as Chief to finally do so, according to rumors surfacing now.

Rumor has it, indirectly heard from two elected officials, one within BART and one within city government, that the long overdue Meyers Nave investigative report on the events of January 1st is set to be released in the very near future and that the report comes down hard on the extremely unprofessional behavior of the officers who detained Oscar Grant and his friends. If the report indeed makes such conclusions, it will validate what community activists have been saying all along. There is no advance word on whether the report will recommend criminal charges against at least Tony Pirone as activists have demanded.

If the Meyers Nave report does turn out to be critical of BART police behavior and not merely a public relations whitewash as some in the community have feared it might be, then it becomes obvious why Chief Gee announced his resignation on Saturday. If the report were to vindicate the BART police at Fruitvale, then it would have also vindicated Gary Gee for taking no action against them and he likely would remain on the force. But, if Gee's officers were out of control -- acting more like a racist, murdering gang than a professional police force -- and Gary Gee failed to hold them to account for their behavior, then he himself is culpable for his own gross negligence as their supervisor. And so his resignation ahead of the release of such a report makes sense.

Looking forward, General Manager Dorothy Dugger is just as culpable as Chief Gee for the failures of the BART police. She is the only one who currently has the authority to reprimand or fire Chief Gee (not even the BART Board legally can), and yet she has failed to do so. Likewise, she has made false statements in support of Gee and the officers involved on the Fruitvale platform. Dugger publicly has stood by Gee and the BART police, deflecting responsibility to Meyers Nave and NOBLE to tell her what to do. Additionally, Tony Pirone and Marysol Domenici need to be held to account for their actions on January 1st, not to mention the perjury they both committed during Johannes Mehserle's preliminary hearing. Why none of the other officers present on the Fruitvale platform felt compelled to check Pirone and Domenici as they assaulted Oscar Grant and his friends, and why they all apparently hesitated in calling for medical assistance after Oscar Grant was shot in the back, are more outstanding issues BART has yet to deal with.

While BART's Board-approved draft for police oversight is flawed for tying its citizen's board's hands with a supermajority requirement and by allowing BART's two police unions to appoint a "citizen" oversight board member, amongst other issues, it is unique in a state dominated by the Police Bill of Rights in that it actually allows civilians outside of BART's police force to have a say in discipline for officer misconduct. Hence the very strong police resistance to the plan -- they worry that it is a foot in the door to stronger civilian police oversight statewide. One can only hope...

Presumably the bill to create external police oversight at BART will pass through the California Assembly's Public Safety Committee, as did Tom Ammiano's AB312, which was an earlier legislative attempt to establish BART police oversight that was stymied by BART itself and statewide police unions. Assemblypersons Jerry Hill and Warren Furutani voiced support for AB312, but passage will also require convincing previously undeclared Assemblypersons Fiona Ma from San Francisco and/or Nancy Skinner from Berkeley in order to move the bill forward. Supporters of increased police oversight at BART should call or email these officials to enourage support for the plan. You can also show up at the offices of Fiona Ma and Nancy Skinner on Fridays when they are required to be in their local offices. 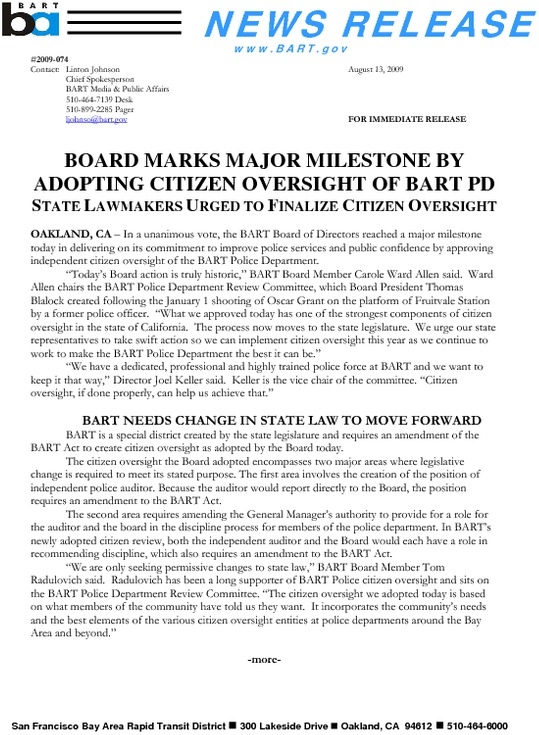 
OAKLAND, CA – In a unanimous vote, the BART Board of Directors reached a major milestone today in delivering on its commitment to improve police services and public confidence by approving independent citizen oversight of the BART Police Department.

“Today’s Board action is truly historic,” BART Board Member Carole Ward Allen said. Ward Allen chairs the BART Police Department Review Committee, which Board President Thomas Blalock created following the January 1 shooting of Oscar Grant on the platform of Fruitvale Station by a former police officer. “What we approved today has one of the strongest components of citizen oversight in the state of California. The process now moves to the state legislature. We urge our state representatives to take swift action so we can implement citizen oversight this year as we continue to work to make the BART Police Department the best it can be.”

“We have a dedicated, professional and highly trained police force at BART and we want to keep it that way,” Director Joel Keller said. Keller is the vice chair of the committee. “Citizen oversight, if done properly, can help us achieve that.”

BART is a special district created by the state legislature and requires an amendment of the BART Act to create citizen oversight as adopted by the Board today.

The citizen oversight the Board adopted encompasses two major areas where legislative change is required to meet its stated purpose. The first area involves the creation of the position of independent police auditor. Because the auditor would report directly to the Board, the position requires an amendment to the BART Act.

The second area requires amending the General Manager’s authority to provide for a role for the auditor and the board in the discipline process for members of the police department. In BART’s newly adopted citizen review, both the independent auditor and the Board would each have a role in recommending discipline, which also requires an amendment to the BART Act.

“Today’s action sends a clear message that this Board is committed to fulfilling its promises,” BART Board Member Lynette Sweet said. Sweet also sits on the BART Police Department Review Committee. “We told the community we would adopt a strong citizen oversight of BART Police this year, and today we delivered on that promise. Now we need help from state legislators to amend the law so we can implement citizen oversight.”

The citizen oversight model adopted by the Board is available online at http://www.BART.gov
http://www.indybay.org/oscargrant
§After Board vote, BART released outdated draft with agenda from July 30th (with related documents)
by dave id Tuesday Aug 18th, 2009 12:41 AM 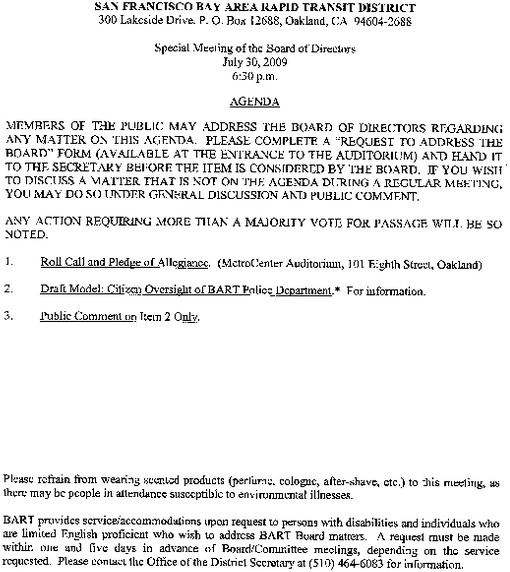 Apparently, the BART Board was in such a hurry to vote the proposal up that it is unclear if they even had an actual finalized copy of their police oversight draft before them when they voted.

On their website several days later they still link to the copy of the draft that was released as the agenda for the July 30th public meeting (with a number of supporting documents such as a PPT summary of the proposal, guiding principles, and the NACOLE code of ethics) rather than the draft that was reviewed in the August 10th police oversight subcommittee meeting or a truly final BART version that incorporates the final edits agreed upon at that last subcommittee meeting. (http://bart.gov/news/articles/2009/news20090813.aspx)

http://www.indybay.org/oscargrant
§UPDATE: BART Releases Public Report from Meyers Nave Investigation, 8/18/09
by dave id Tuesday Aug 18th, 2009 10:42 PM
Just this afternoon, BART released the public version of the Meyers Nave report...
http://www.indybay.org/newsitems/2009/08/1...
Add Your Comments
LATEST COMMENTS ABOUT THIS ARTICLE
Listed below are the latest comments about this post.
These comments are submitted anonymously by website visitors.