by dave id
Justice for Oscar Grant activists took to East Bay BART trains and stations to inform riders about BART's intransigence toward holding anyone accountable for their police officers' atrocious behavior on New Year's Day. Besides laying out some of the basic facts about the events surrounding the murder of Oscar Grant, activists implored: Help us pressure BART to do the right thing and discipline these officers. Help us pressure the state to charge these officers with the crimes they committed. This informational outreach is a simple and effective action groups of any size can do whenever BART is open to the public. Fliers that can be printed out are below.
Copy the code below to embed this movie into a web page:
Download Video (25.9MB) | Embed Video
(video 8:04)


While BART has been trying to keep public attention focused on their seriously flawed police oversight model, Oscar Grant's family and community activists continue to confront the simple fact that after eight months BART has still not held one single person accountable for the murder of Oscar Grant or the abuse of his friends on January 1st. BART allowed Johannes Mehserle to resign in January and now have allowed Police Chief Gary Gee to retire of his own accord before the end of the year.

On Friday, September 4th, the Bay Bridge was closed for the long holiday weekend due to construction, meaning there would likely be a larger than normal ridership, and Johannes Mehserle's 995 hearing was set for 9am, so activists from No Justice No BART, Oakland CopWatch, and the Ella Baker Center for Human Rights took to the BART system at 7am to distribute thousands of fliers and talk with hundreds of passengers on their morning commute. Alternating between walking through BART stations and dozens of cars on various BART lines through the East Bay, activists were well received by supportive BART passengers, many of whom remain uninformed about known details from January 1st and BART's willful denying of community demands for accountability, as well as BART's lack of action after the scathing Meyers Nave report was released.

As the morning commute wound down, activists left BART to attend Mehserle's 995 hearing.

Later in the day, after the Mehserle hearing, it was learned that BART's disingenuous attempt to ram through AB1586 (originally named AB16) would fail in this legislative session, meaning that there would be no new police oversight of any kind established before the end of the year. This is just as well, because in April BART had already stalled Tom Ammiano's AB312, which would have mandated civilian oversight for the BART Police Department (and potentially could have been law by now if BART had gotten behind it). BART stymied AB312 (along with California police unions) under the promise that they would create their own civilian police oversight model, but BART undercut the strength of their proposal every step of the way. BART chose two BART police union representatives to be on the subcommittee tasked with creating the oversight model and BART put provisions into their draft that weakened their model, such as a 2/3 supermajority requirement and allowing a police appointment to the "civilian" board. These moves were made to appease police interests, yet BART's own police unions and PORAC still opposed BART's oversight model. Once again bending to the will of police interests, BART stripped out any strength their oversight plan had left, the authority for it's Board of Directors to overrule the General Manager and Police Chief in matters of discipline for police misconduct. BART did this without notifying the public of the drastic change, all the while BART was asking the community to lobby legislators for their plan. This community bait-and-switch was perpetrated so that BART could have the "help" of PORAC (Peace Officers Research Association of California) to get their changes to the BART Act approved by the California legislature, but apparently PORAC's help wasn't so helpful after all and the BART oversight plan is now dead on the tracks.

BART had wanted to be able to say they had "done something" to make amends for the murder of Oscar Grant III before the one-year anniversary of his death this coming January, and hence the rush to push for any old grossly inadequate police oversight plan. Now with that plan dead, BART's lack of moral courage shown by its unwillingness to hold anyone accountable will only be that much more obvious if they continue to refuse to take disciplinary action before January 1st, 2010.

No Justice No BART Takes the Truth to the Trains
NJNB Informs Public About Officer Pirone's Racism and Chief Gee's Defense of BART Officers
http://www.indybay.org/newsitems/2009/07/21/18611968.php

No Justice No BART
http://nojusticenobart.blogspot.com


END_OF_DOCUMENT_TOKEN_TO_BE_REPLACED
§Thousands of fliers were handed out
by dave id 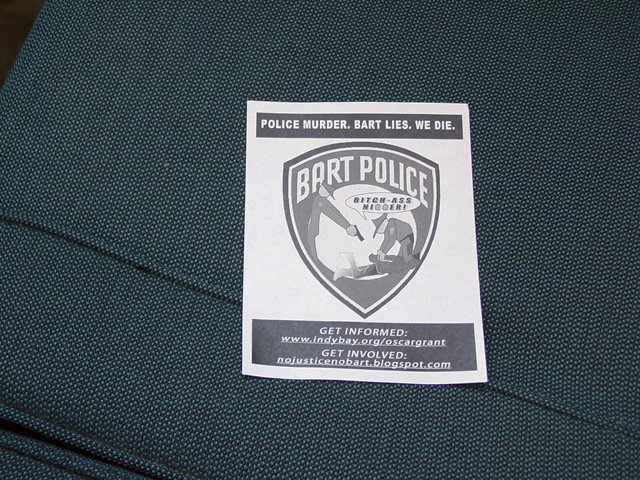 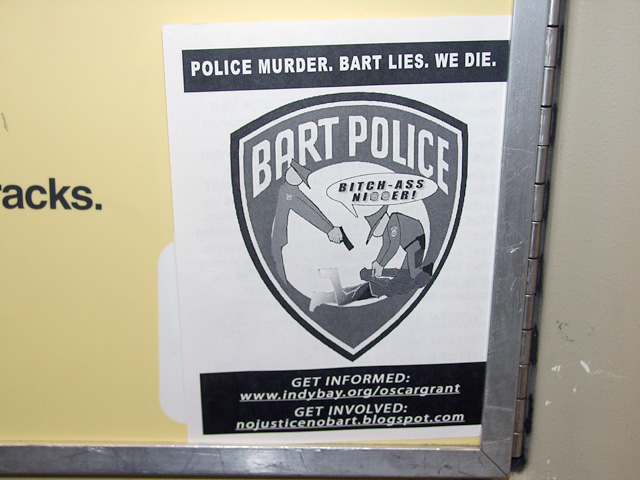 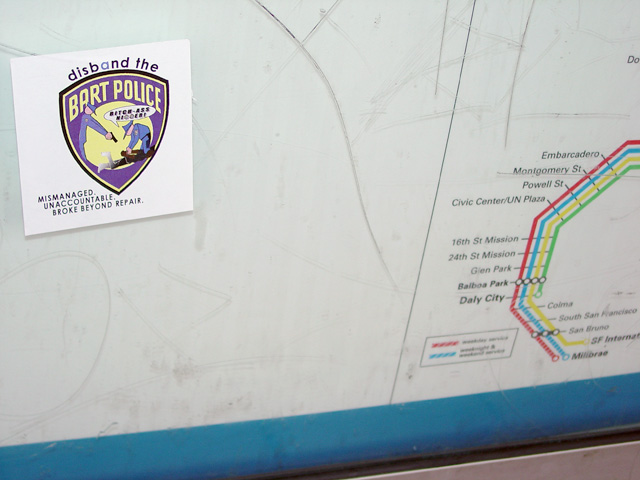 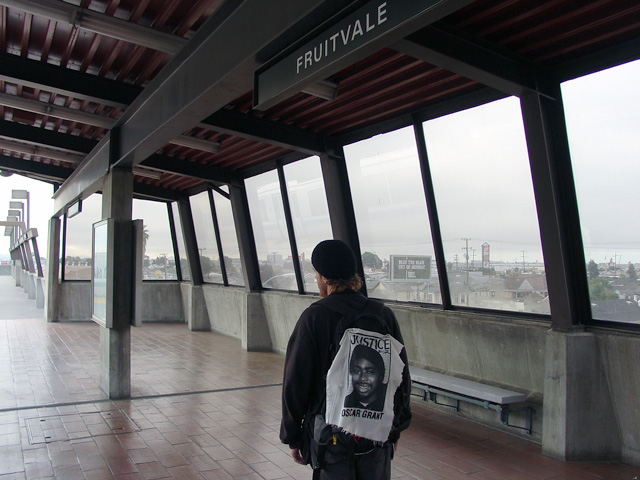 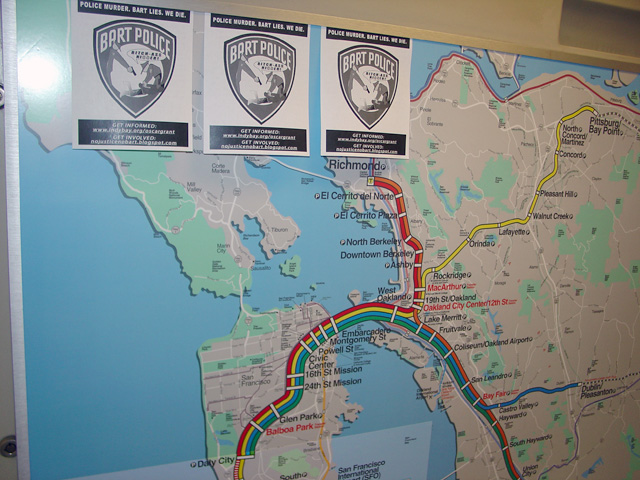 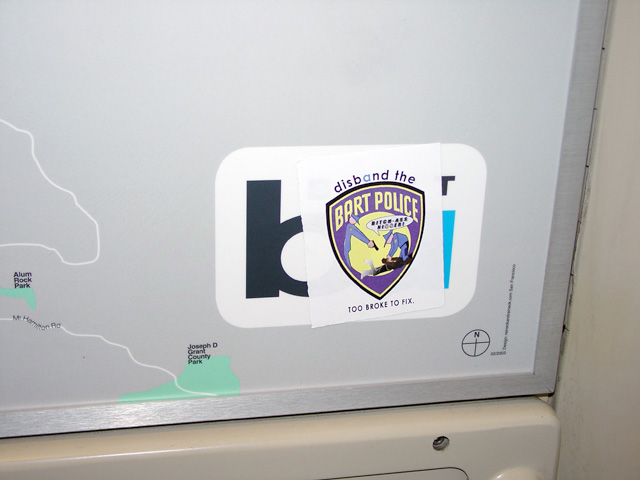 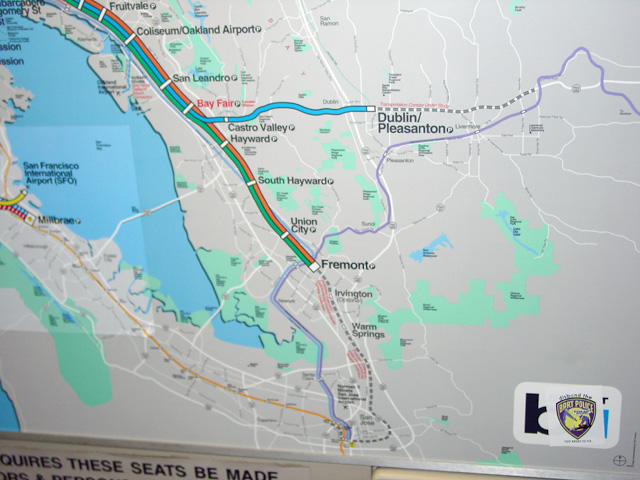 All three police murder victims were killed in the East Bay, two at the Hayward station and one in Oakland at the Fruitvale station. If you doubt the hostility BART police have for the East Bay, you can read the hateful comments of BART officers from when they were objecting to BART's proposed oversight draft, or listen to BART Director Lynette Sweet tell that BART police tasered a handcuffed Black man this year (about 10 minutes before end of audio recording), or read the public version of the Meyers Nave report on BART police actions on January 1st.
END_OF_DOCUMENT_TOKEN_TO_BE_REPLACED
§Disband the BART police!
by dave id 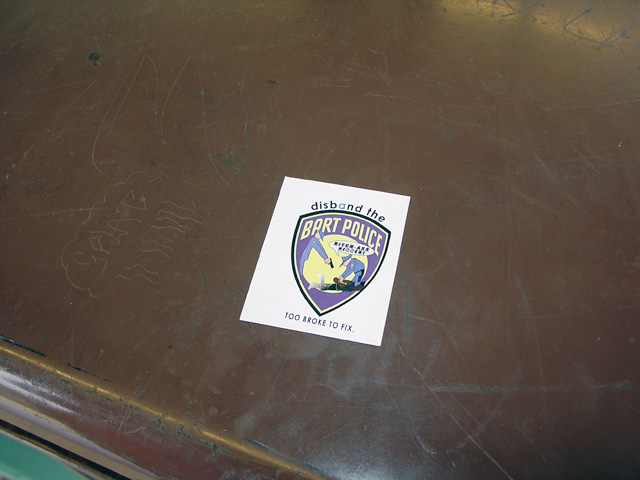 Appropriately on a garbage can.
END_OF_DOCUMENT_TOKEN_TO_BE_REPLACED
§Commuter learning about the vile behavior of police that BART protects
by dave id 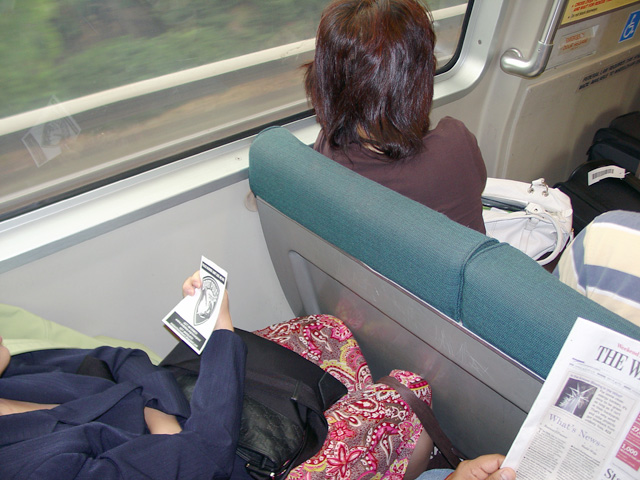 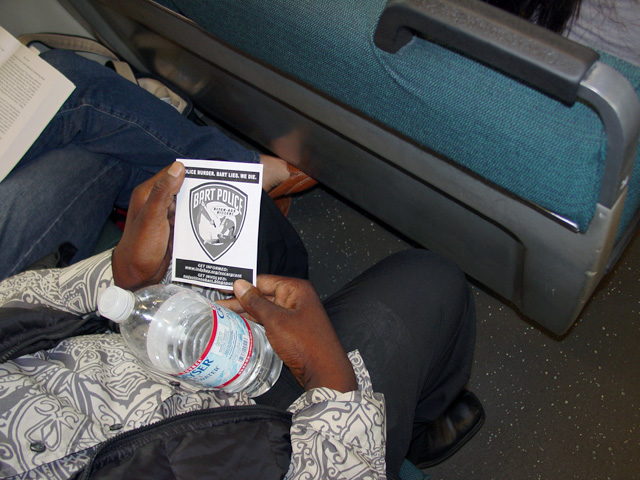 END_OF_DOCUMENT_TOKEN_TO_BE_REPLACED
§Help us pressure BART to do the right thing and discipline these officers.
by dave id 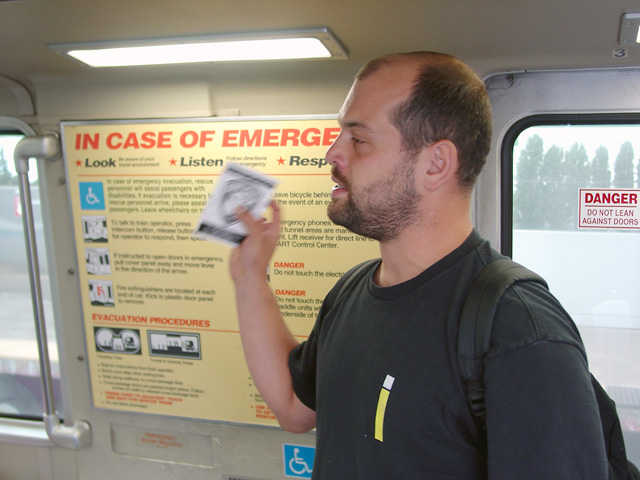 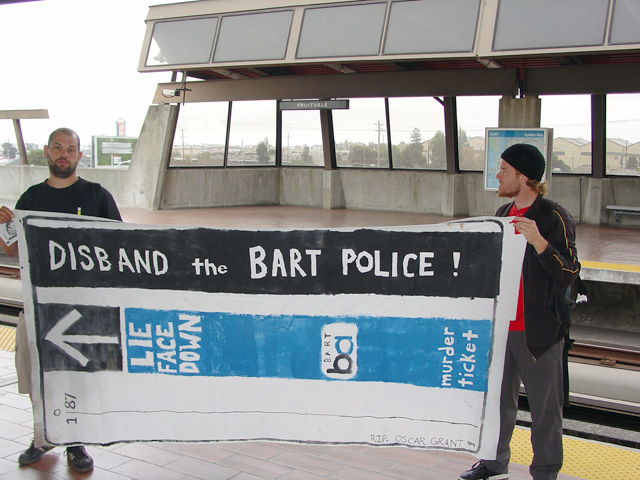 Oscar Grant III and his friends were unlawfully detained and abused on the platform in the background
END_OF_DOCUMENT_TOKEN_TO_BE_REPLACED
§BART police recruiting poster offers SWAT, undercover, and K-9 cop action
by dave id 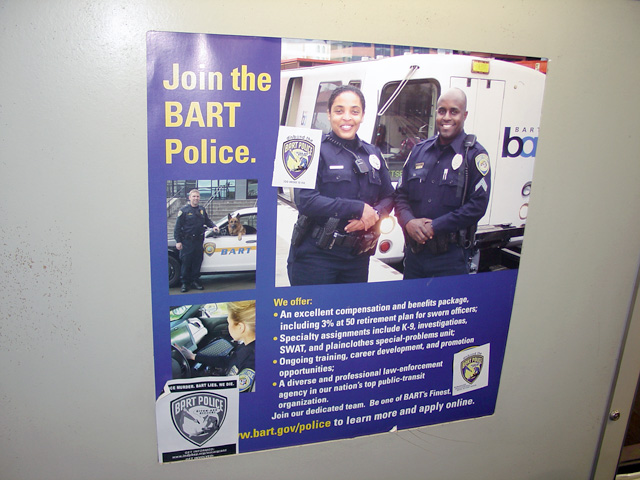 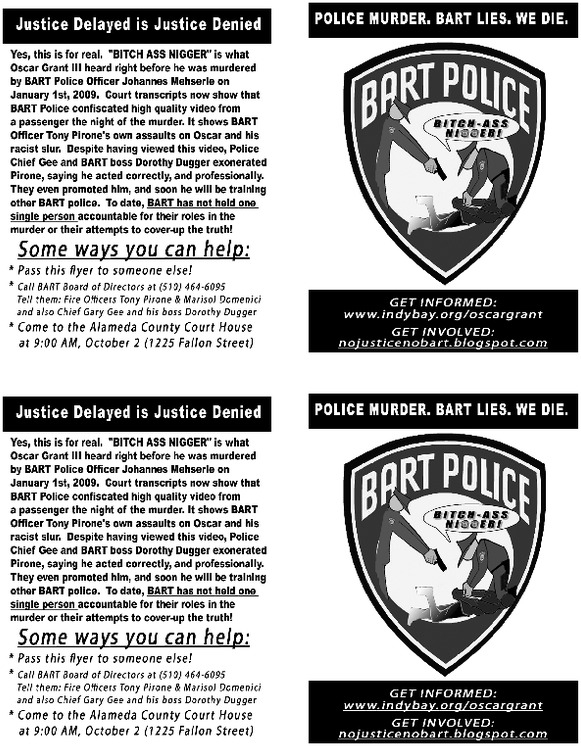 Yes, this is for real. "BITCH ASS NIGGER" are some of the last words Oscar Grant III heard before he was
murdered by BART Police Officer Johannes Mehserle on January 1st, 2009. Court transcripts now show
that BART Police confiscated high quality video from a passenger the night of the murder. The video
captured BART Officer Tony Pirone's own assaults on Oscar and his racist slur. Despite having viewed this
confiscated video, Police Chief Gee and BART boss Dorothy Dugger exonerated Tony Pirone, saying he acted correctly, and professionally. They even promoted him, and soon he will be training other BART police. To date, BART has not held one single person accountable for their roles in the murder or their attempts to cover-up the truth!


SOME WAYS YOU CAN HELP:
- Pass this flyer to someone else!
- Call BART Board of Directors at (510)464-6095. Tell them: Fire Officers Tony Pirone & Marysol Domenici and also Chief Gary Gee and his boss Dorothy Dugger.
- Come to the Alameda County Court House at 9:00am, Osctober 2nd (1225 Fallon Street)
END_OF_DOCUMENT_TOKEN_TO_BE_REPLACED
§Johannes Mehserle's 995 Hearing, 9/4/09: video, photos, and court documents
by dave id
For information on 995 hearing, please see: http://www.indybay.org/newsitems/2009/09/16/18622116.php
END_OF_DOCUMENT_TOKEN_TO_BE_REPLACED
Add Your Comments
Latest Comments
Listed below are the latest comments about this post.
These comments are submitted anonymously by website visitors.
TITLE
AUTHOR
DATE
Gabe Meyers takes plea and is sentenced
Justice for Oscar!
Support Independent Media
We are 100% volunteer and depend on your participation to sustain our efforts!