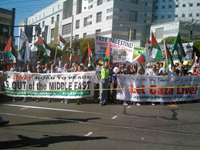 On Saturday, January 10th, the ANSWER Coalition called for nation wide protests against the atrocities and occupation perpetrated by the Israeli government in Gaza. The San Francisco protest started in Civic Center at 11am and thousands of protesters marched up Market St. to protest Israel's attack on Gaza.

Breaking News From 1/10/2009
12:25pm: March is headed up Market towards Powell, filling over 3 blocks of Market Street with demonstrators.
12:15pm: The march has begun. Crowd has swelled over 5000 people. Counter-protester numbers remain about the same. One counter-protester holds a sign that reads, "Until all of Gaza is destroyed, the job is not done."
11:30am: Up to 3000 people have gathered at Civic Center Plaza. Speakers are taking turns addressing the crowd about the situation in Gaza now. Across the street in front of City Hall, several hundred counter-protesters waving Israeli and American flags are gathered, some with bullhorns attempting to drown out main speakers on stage.

In San Jose about 1,000 people marched through the tony Santana Row shopping district, stopping traffic and surprising shoppers. Some shouted "Stop shopping while bombs are dropping!"

More then 850 people have died and thousands have been wounded in Israel's attacks on Gaza. 1.6 million Gazans are living without access to basic services and face constant Israeli attacks in one of the most densely populated areas of the world. Gaza’s hospitals are not equipped to receive so many patients and Israel’s bombing of civilian infrastructure has cut electricity to everyone including hospitals.

On January 8th, the UN accused Israel of purposefully killing its aid workers and says it was suspending its relief efforts. A UN agency has also said Israeli troops ordered Palestinian civilians into a house in Gaza City, then shelled the building 24 hours later. The ICRC has accused Israel of targeting its aid workers and restricting access to thousands of wounded civilians, including several young children who the Red Cross found living several days among the bodies of over a dozen dead relatives. Comments on many Israeli websites and blogs show a growing level of hatred towards the Red Cross and other relief agencies for reporting on atrocities, and it is very likely that such hatred is shared by the soldiers who have been targeting relief workers.

Late in the day on January 8th, the UN Security Council passed a resolution calling for a ceasefire. "Israel has never agreed for any outside influence to decide on its right to defend its citizens," Prime Minister Ehud Olmert responded, rejecting the ceasefire January 9th as it has most past UN resolutions that have sought to protect Palestinians. On January 10th, Israel started dropping leaflets on Gaza saying they were planning an escalation of the ground assault on Gaza.

All over the world, demonstrations are being held. In Turkey a basketball game with an Israeli team was canceled after the crowd ran into the field yelling “Free Palestine”. Several governments have also backed up their criticism of Israel with action, with Venezuela and Mauritania withdrawing their ambassadors from Israel.

Sadr: Kill US Troops for Gaza |

Recent Indybay Coverage Of Gaza and Protests Local and Abroad