Add an Event
Newswire
Calendar
Features
Home
Donate
From the Open-Publishing Calendar
From the Open-Publishing Newswire
Indybay Feature
Publish to Newswire
Add an Event
Related Categories: Palestine | San Francisco | Anti-War
Anti-Authoriatrian Bloc Against The Attack on Gaza: This Saturday!
by UA in the Bay
Thursday Jan 8th, 2009 10:10 PM
ANTI-AUTHORITARIAN BLOC AGAINST THE ISRAELI ATTACK ON GAZA 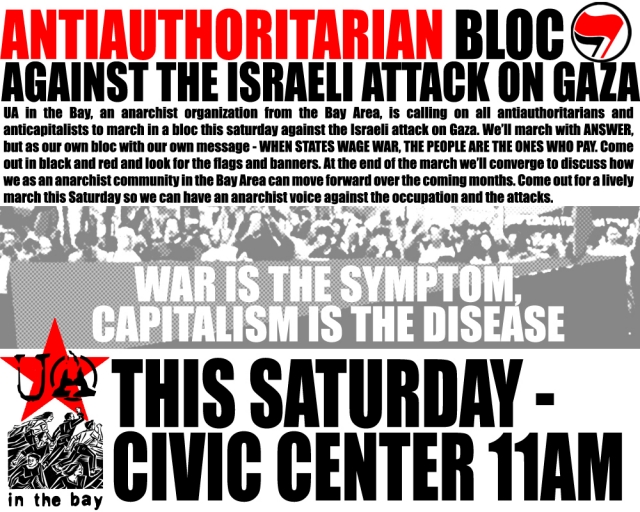 original image (1000x800)
UA in the Bay, an anarchist organization from the Bay Area, is calling on all antiauthoritarians and anticapitalists to march in a bloc this saturday against the Israeli attack on Gaza. We’ll march with ANSWER, but as our own bloc with our own message - WHEN STATES WAGE WAR, THE PEOPLE ARE THE ONES WHO PAY. Come out in black and red and look for the flags and banners. At the end of the march we’ll converge to discuss how we as an anarchist community in the Bay Area can move forward over the coming months. Come out for a lively march this Saturday so we can have an anarchist voice against the occupation and the attacks.

THIS SATURDAY -
CIVIC CENTER 11AM
Add Your Comments
LATEST COMMENTS ABOUT THIS ARTICLE
Listed below are the latest comments about this post.
These comments are submitted anonymously by website visitors.