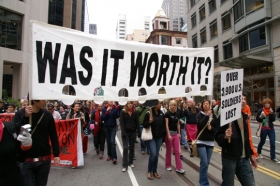 March 19th saw a revival of the direct action movement in the Bay Area. Independent media activists came together to broadcast a radio station and DASW had a webcam broadcasting video. Volunteers provided legal assistance. Affinity groups came back together for another day in the streets, putting their bodies on the line to remind the world that torture has been a way of life for the Bush administration. Bike contingents and snake marches wove in and out of crowds, providing assistance to protesters and facing an equal risk of arrest. The police responded by swiftly arresting approximately 150 people- including protesters and media-- at several sites. Four Codepink protesters were detained after allegedly hanging a banner from the Golden Gate Bridge, while paintballs were anonymously thrown at several corporate targets.

Police had amassed before 7:00am near some key intersections. At 7:09am, it was reported that the Federal Reserve building at 101 Market had been shut down by a lockdown. At UCSF Mission Bay, protesters set out to shut down the UC Regents' meeting with a lockdown and an Alternate Regents' meeting. Police busted the lockdown and started arresting participants by 7:30am. 345 California, home of Chevron Energy Solutions, was another site of a lockdown and some ten arrests. Chevron closed business for the day.

At 10am, a die-in at 3rd and Market street took up all lanes and Market street was completely blocked. Police moved in and 27 people were arrested. Around noon, 100 protesters engaged in a second die-in at Montgomery and Market Streets, stopping all traffic for about two hours. At 3pm, Codepink, Raging Grannies Action League, and some black blockers converged on the recruitment center on Davis. By 5pm, approximately 165 people had been arrested in various direct actions across the city. In the evening, there was a rally and march starting from Civic Center. Several thousand people listened to speakers and took to the streets to protest the war.