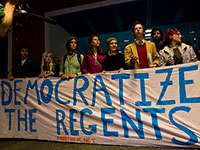 Outraged over the undemocratic nature of the University of California Board of Regents and the Regents’ continued management of the national nuclear weapon labs, on March 19th, students from the Coalition to Free the UC took nonviolent direct action at the UC Regents meeting at UCSF Mission Bay campus in an attempt to obstruct their ability to meet.

Twelve Free the UC members locked themselves to doorways with bicycle U-Locks around their necks, while others unfurled banners stating “Democratize the Regents,” “Money for education not nuclear weapons,” and “Eliminate the SAT.” Other issues raised included UC’s continued privatization and corporatization as evidenced by UC’s $500 million deal with British Petroleum, UC’s continued internment of 13,000 Native remains against the wishes of Tribal Leaders, the environmentally destructive UCSC Long Range Development Plan, and UC’s plans to cut down Berkeley’s Memorial Oak Grove.

Entitled “Free the UC Day,” the day of action was part of March 19th Direct Action to Stop the War in downtown San Francisco. Ten of those who locked down were ultimately arrested and cited for “disturbing the peace” and other misdemeanors, and released within a few hours on their own recognizance. Over 100 students from five UC campuses participated.