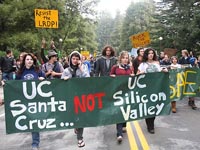 One person was arrested by UC police early in the morning. Police surrounded the site, where at least 4 activists were 50 feet up redwood trees. A scheduled rally and march that began at 11am drew hundreds of supporters to the site. A tense standoff with police commenced, as supporters attempted to get close enough to the trees to send up supplies. Police pepper sprayed the crowd and at least four people were arrested.

The Biomedical Sciences facility would be the first project under the University's plan to develop 120 acres of forest in order to accommodate 4,500 new students. The Biomedical Sciences building will have no allotted classroom space, despite student complaints about overcrowded class sizes. But it will have room for live animal experimentation, which includes such practices as food/air deprivation, infection, and non-anesthetized surgery, according to campus guidelines. Read More

overview: A Story-Line of November 7th and Supplies Wish-List

LRDP Resistance: Getting Supplies in the Trees |