Add an Event
Newswire
Calendar
Features
Home
Donate
From the Open-Publishing Calendar
From the Open-Publishing Newswire
Indybay Feature
Publish to Newswire
Add an Event
Related Categories: Santa Cruz Indymedia
Struggle on Science Hill.
by HG (wnortonm [at] ucsc.edu)
Thursday Nov 8th, 2007 12:28 PM
Interview with activists, photographs of violence, and a short look at the LRDP brought to you by an unwillingly unemployed and thus angry independant journalist. 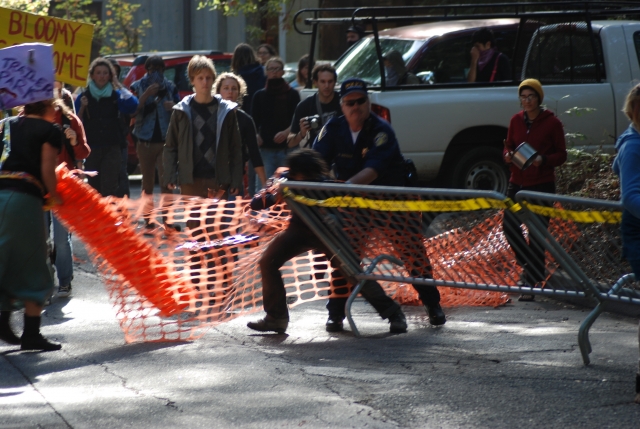 original image (2896x1944)
Nov 7 Noontime - a group of students protesting the UCSC’s Long Range Development Plan (LRPD) struggled with police while bringing food and water to a group of about five old-style activists who, using mountain climbing gear, had placed themselves and several wooden platforms inside the upper reaches of several redwood trees.

The march, and chaos.

The police had arrived on the scene early that day and had cordoned off the area on science hill just outside the Science and Engineering Library with tape, plastic fencing, and portable metal barriers.

However, the protest turned ugly when the march circled the enclosure. One protestor speaking with a police officer took a step too close, was told to step back, and was pushed forward by the crowd.

One of the protestors, Jane Olivera, retold what happened next. She had been walking around the enclosure at the front of the march when she saw her friend Robin Speaking with someone who wasn’t part of the protest.

Olivera sustained multiple bruises and a scratch on her left arm, was arrested, ticketed, and then released on the scene along with the rest of the protestors. No one was hospitalized.

Along with the arrests an indeterminate number of students received blows from batons around the arms and head and were hit with pepper spray. Students pulled down fences and climbed across, the police stepped back while spraying, clubbing, and pushing.

Almost an equal number of students ran towards the fences and away from them. One girl stood rooted to the ground while the metal grate was being lifted by police and pulled away by students.

Later reinforcements arrived in about six to eight squad cars with what appeared to be tear gas and armor. When the officers who were armed were asked about their weapons they did not respond. These officers formed a line across the middle of the grove where they remained for several hours.

Students then read the entirety of ‘The Lorax’ using a megaphone, shouted at the police, and helped bring supplies to the trees where the sitters hoisted up water, food, and blankets.

Olivera and other protesters were released by police officers only a little after the reading of the Lorax. She was scratched and shaken.

“A lot of my friends are organizers and I just don‘t think that development is really a good idea because we can‘t support the number of students we have now and the development is going to stress the water table, the town - there are a lot of reasons outside the trees that makes this not a good idea,” Olivera said. “I don‘t want to go to school inside a cement block.”

The LRDP was approved unanimously by the UC regents in on September 28 ‘06 who had originally drafted the plan three years earlier in 2003. The plan makes way for the development of 120 acres of upper campus, the possible destruction or relocation of the UC trailer park, the addition of 4,500 new students, and the construction of a biomedical sciences facility on what is now a grove of second growth redwood trees.

The district supervisor Mardi Wormhoudt, and the members of the Coalition for Limiting Campus Expansion (CLUE) have been fighting the LRDP. To do this Wormhoudt drafted measures I and J, which made the University responsible for complying with the Local Agency Formation Commission’s (LAFco) guidelines before the City extends water and sewer service to the university, which would, in effect inhibit University growth by preventing the toilets from flushing in whatever buildings the University makes if the guidelines aren’t met. Currently CLUE is engaged in a legal battle over the proposed construction as well.

Jennifer Charles is a UCSC alumna, and the media contact for the protest. She said that campus expansion would decrease the quality of the education that students receive.

“This comes at a time when UCSC is increasing enrollment but really decreasing the quality of education. They’re putting a lot of money towards expansion,” she said. “but not a lot of money for the programs that students need.”

“Those are programs that students really want to see. Instead the University is expanding things like the facility planned to be on this site. It‘s an 80 million dollar facility for research that includes live animal testing. It includes no classroom space. The entire building will be used by graduate students and researchers which will probably be funded by outside corporations. And as we‘ve seen at other universities when private corporations are funding research at public insititutions they want control over research.”

Charles said that the LRDP would change the university from a small liberal arts college into a massive science college which would annihilate the feel of UCSC.

After the violence, after the chanting, and after the reading of the Lorax the police left. Supplies were hoisted up into the trees. The sitters have climbed the trees and are now living in the branches around science hill.

One of the tree sitters wearing a sweatshirt with a hood and a camouflaged mask came down and refused to give his name or reveal his face. He referred to himself only as Malachi.

Malachi said that the sitters’ voices had not been heard. He said that he and the other tree sitters were going to remain suspended above the ground for as long as it took to change the LRDP “to accommodate all of upper campus and not just corporate interests.”

“We just need support,” said Malachi. “If people want to come up and sit for a few days then they can do that. If they want to come and bring food - day or night - just tell them you‘ve got some food and they‘ll lower a line.”

According to the organizers the tree sitters need blankets, buckets (the ten gallon kind with lids,) portable stoves, and food.

You can learn more about how you can help the sitters by visiting LRDPresistance.org and sending them an E-mail.
§police
by HG Thursday Nov 8th, 2007 12:28 PM 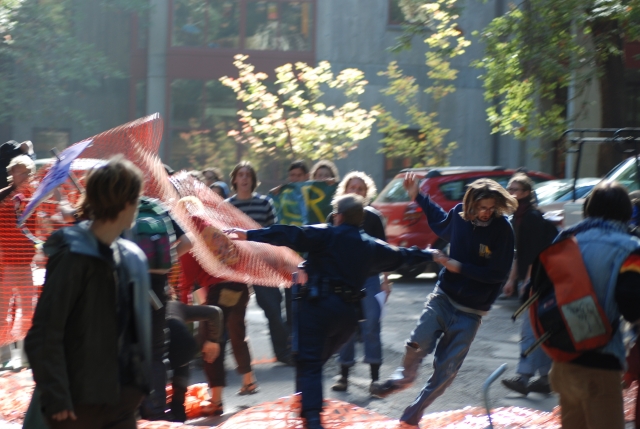 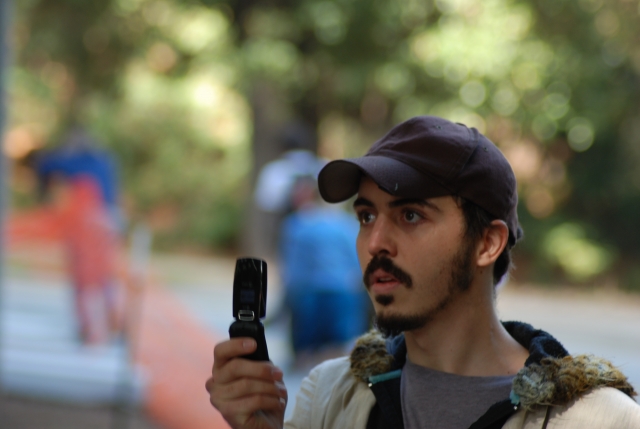 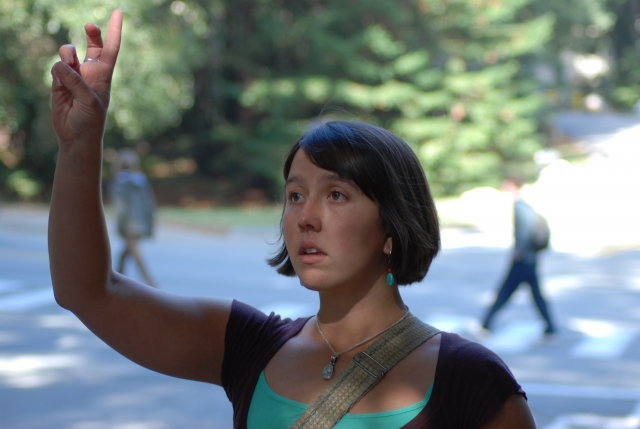 original image (2896x1944)
This is actually my favorite photograph of the batch. I was walking away from the protest because I wanted a shot from the street. Then violence broke out and people started running away, except for this girl; she kept where she was and held a slightly wilting peace sign. It seemed pretty noble when I took it.
§Wash
by HG Thursday Nov 8th, 2007 12:28 PM 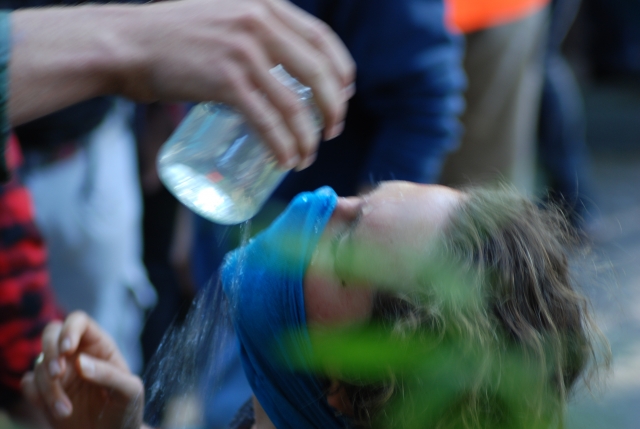 original image (2896x1944)
This girl was at the front and she got an eyefull of pepper spray. You can see her in other photographs as well. I had a picture of her face but it didn't come out that well because she tried to get close to me and I was using a zoom lens. Proximity and zoom lenses don't mix.
§runningfence
by HG Thursday Nov 8th, 2007 12:28 PM 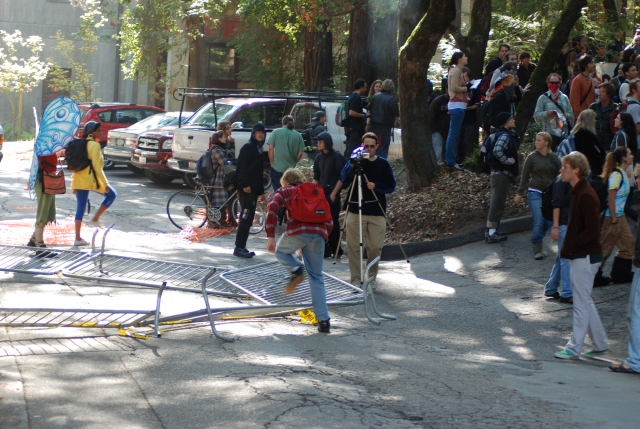 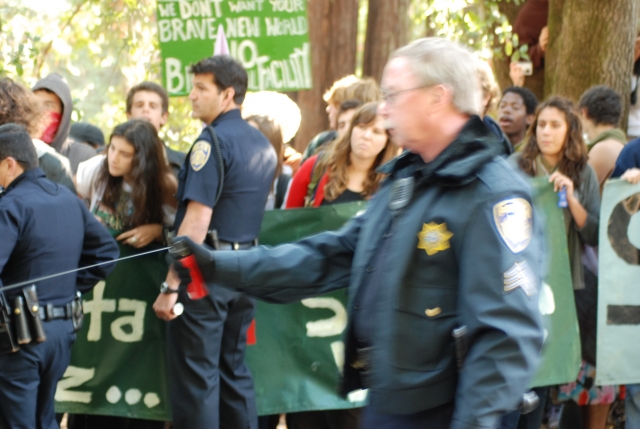 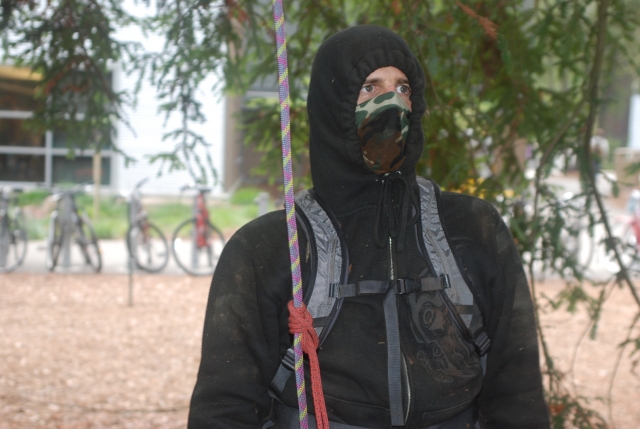 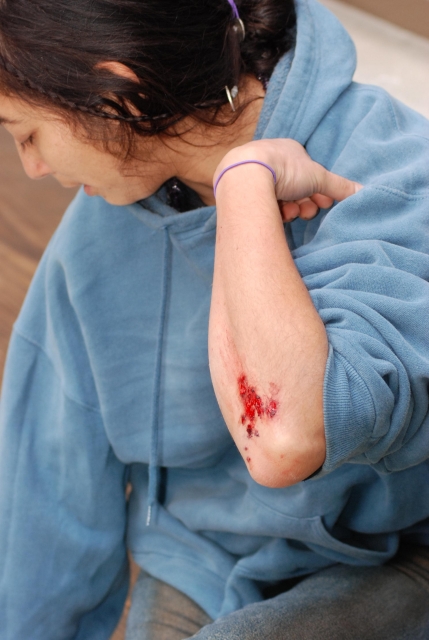 original image (1944x2896)
Says she scraped her elbow when she was thrown by police.
Add Your Comments
LATEST COMMENTS ABOUT THIS ARTICLE
Listed below are the latest comments about this post.
These comments are submitted anonymously by website visitors.