Students Demand a Democratic UC Board of Regents and No More Nuclear Weapons; 12 Lockdown

by The Coalition to Free the UC
Outraged over the undemocratic nature of the University of California Board of Regents and the Regents’ continued management of the national nuclear weapon labs, on March 19th, 2008, students from the Coalition to Free the UC took nonviolent direct action at the UC Regents meeting at UCSF Mission Bay campus in an attempt to obstruct their ability to meet. 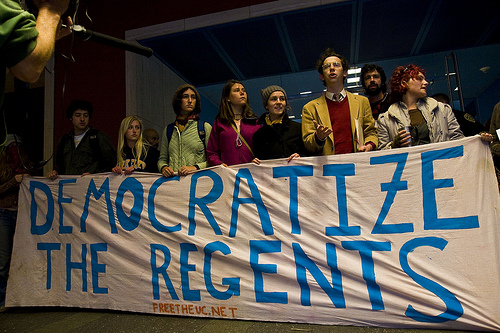 “For over 50 years, students, faculty, and community members have tried to persuade the Regents to stop building nuclear weapons. We’ve used normal means such as petitions. At one point, student governments from every UC campus passed a resolution asking the Regents to sever ties from the nuclear weapons labs, to no avail. The Regents’ lack of response has left us little choice but to escalate our dissent,” said UC Berkeley peace and conflict studies student Matthew Taylor.

Twelve Free the UC members locked themselves to doorways with bicycle U-Locks around their necks, while others unfurled banners stating “Democratize the Regents,” “Money for education not nuclear weapons,” and “Eliminate the SAT.” Other issues raised included UC’s continued privatization and corporatization as evidenced by UC’s $500 million deal with British Petroleum, UC’s continued internment of 13,000 Native remains against the wishes of Tribal Leaders, the environmentally destructive UCSC Long Range Development Plan, and UC’s plans to cut down Berkeley’s Memorial Oak Grove.

Meanwhile, with their comrades in lockdown, other Free the UC members convened an “Alternative Regents Meeting” in the grassy field in front of the building, and attempted to model what a transparent, accountable, responsible, participatory, and democratic Regents meeting would look like.

"The phrase 'westward the course of empire takes its way' by Bishop Berkeley was the University's mantra from the day it was founded. UC is still very much an imperial institution, with its involvement in the neocolonial ambitions of British Petroleum and UC's crucial role in the military industrial complex. What would a just, diverse, and peaceful public university look like? Our goal is not just to disrupt one UC Regents meeting, but to empower students and raise awareness among the community about the need for fundamental, structural change in the University of California. It's up to us to start a mass movement," added Taylor.

Entitled “Free the UC Day,” the day of action was part of March 19th Direct Action to Stop the War in downtown San Francisco. Ten of those who locked down were ultimately arrested and cited for “disturbing the peace” and other misdemeanors, and released within a few hours on their own recognizance. Over 100 students from five UC campuses participated.

1) Endorse democratization of the UC Board of Regents. Free the UC asks the Regents to write a letter to the Governor endorsing an amendment to the state Constitution to provide for democratic election of the UC Regents.

2) UC stop designing nuclear weapons. For decades, students, faculty, and community members have attempted to persuade the UC Regents to sever ties from the nuclear weapons labs, to no avail.

3) Stop student fee hikes. Fees should be immediately frozen, with the long-term goal of returning to the Master Plan’s mandate for tuition-free.

4) Eliminate the discriminatory SAT from the admission process. The UC Regents should adopt the faculty proposal to eliminate the SAT II, as well as eliminate the entire SAT in UC admissions, and work toward increasing underrepresented minority enrollment.

7) Cancel the UCSC Long Range Development Plan. We urge the Regents to rescind the LRDP and engage with students and community members to draft a new plan. In promising widespread destruction to a sensitive ecological hot spot that includes a redwood forest and endangered species, the LRDP will bring irremediable damages. 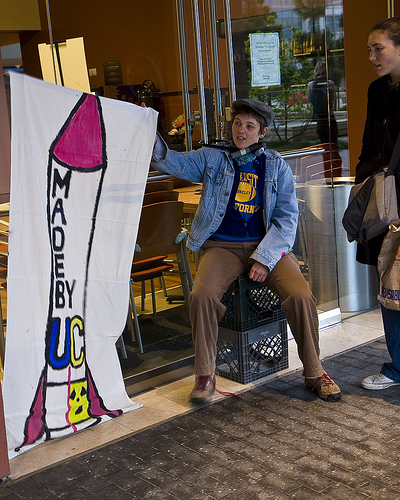 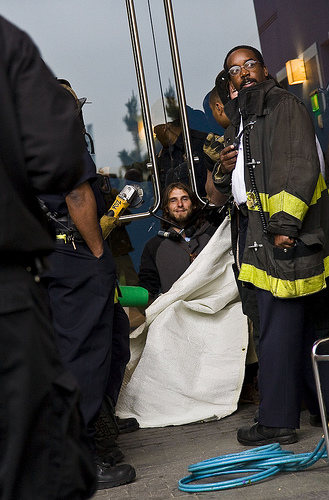 Add Your Comments
Latest Comments
Listed below are the latest comments about this post.
These comments are submitted anonymously by website visitors.
TITLE
AUTHOR
DATE
10) Free the Animals. No More Vivisection!
UC Student
Support Independent Media
We are 100% volunteer and depend on your participation to sustain our efforts!