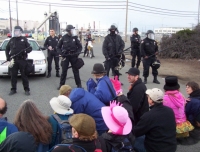 On Saturday March 15th, activists and community members protested the war in Iraq, environmental racism and global warming by blockading the Chevron oil refinery in Richmond, CA. A coalition which includes health, environmental and anti-war organizers had called for people to shut down the Chevron refinery for the day in support of community efforts to stop Chevron from expanding its Richmond refinery. An expansion will increase pollution and cause asthma, cancer and rising death rates in surrounding communities.

Chevron was shut down all day in anticipation of the protest. Protesters marched to one of the main gates of the refinery and people laid out lock down tubes and barrels and up to 50 people locked themselves down. Bands played, and there was street theater and food. The police had the entrance blocked with barricades. After several hours, the lockdown was ended. Protesters held a circle gathering then quickly moved the barricades and went toward Chevron. Police were startled but formed a line and people sat down. Other people took down the rest of the barricade and put it out in the intersection to keep the street closed. People sat in front of the police for several more hours. Eventually the police arrested 25 people. Protest organizers say that Chevron is driving the war and occupation in Iraq, refining over a million barrels of stolen Iraqi oil in Richmond a month, and actively lobbying for the privatization of Iraq's oil fields.

Chevron has a long and highly profitable history with Iraq—one it wants to see significantly expanded. Most recently, Chevron has teamed-up with Total to bid on Iraq’s fourth largest oil field, the Majnoon field. Chevron hopes to produce oil in the field under the terms of the Iraq Oil Law. It has continued regular negotiations with Iraq’s leading government officials in pursuit of the best contract deals possible, while the Bush administration pressures the Iraqis to pass the Iraq Oil Law.

In Richmond, a city with a population of about 100,000, the vast majority of whom are low-income people of color, 17,000 people live within just three miles of the Chevron refinery, including in two public housing projects. Built in 1902, the Chevron Richmond Refinery is one of the oldest and largest refineries operating in the U.S. To refine its capacity of 87.6 million barrels of crude oil per year—240,000 barrels a day—the refinery produces over two million pounds of climate-poisoning, smog-forming and toxic air and water pollutants each year. Event Announcement