Add an Event
Newswire
Calendar
Features
Home
Donate
From the Open-Publishing Calendar
From the Open-Publishing Newswire
Indybay Feature
Publish to Newswire
Add an Event
Related Categories: East Bay | Global Justice & Anti-Capitalism
Chevron protest in Richmond, 2008
by cp
Sunday Mar 16th, 2008 12:19 AM
On March 15, 2008, a large group of ~500 gathered to protest the Chevron corporation in Richmond. There are a long list of reasons why people object to the business practices of Chevron, not the least of which is the level of pollution and high rate of accidents which has caused high asthma and disease rates in Richmond, leaving it as the most impoverished community in the region. The refineries are the reason only poor people with few alternatives tend to live on this side of the bay, across the bridge from affluent Marin county. 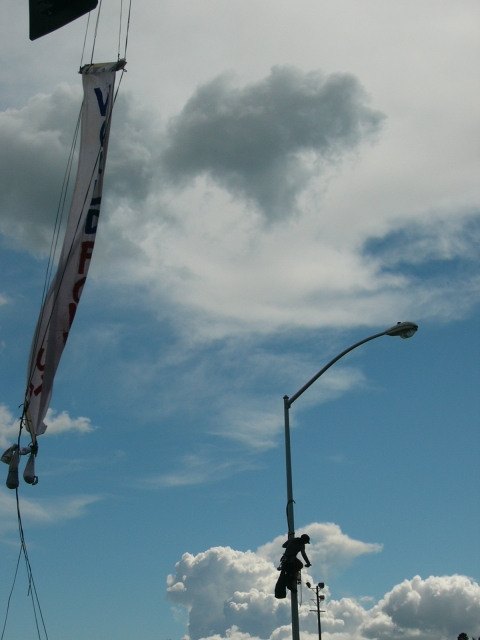 original image (1200x1600)
Chevron has made record profits this year, despite the complaints by commuters, truckers, and farmers over the high price of gas. Bush and Cheney have both traveled to the middle East to ask that OPEC should produce more oil out of charity for our economy, yet their top campaign contributors Chevron continue to profit wildly from this situation. Moreover, Chevron has been awarded special privileges to set up new drilling and production in Iraq after our tremendously expensive occupation for the past five years. Again, Chevron profits while the people of Iraq aren't allowed to control their major natural resource.
(see excellent coverage of the abuses of the Chevron corp. at :
http://protestchevron.blogspot.com/
http://bayareadirectaction.files.wordpress.com/2008/02/chevron-fact-sheet.pdf
and excellent coverage of the Iraq oil law (giving their resource away to us) by Antonia Juhasz
http://www.nytimes.com/2007/03/13/opinion/13juhasz.html?_r=1&oref=slogin
http://www.thebushagenda.net/

A pretty impressively sized crowd converged at the Point Richmond park at the end of Cutting Boulevard. At least 50 people rode bicycles, and a shuttle transported people from the BART station. From 11am-1pm, several talented speakers and musical groups motivated the crowd, explained their personal experiences living in the Richmond area where Chevron both pollutes and doesn't carry its tax burden, and spoke about the connection of oil companies with the trajectory of the Iraq escalation. The mayor of Richmond and Cindy Sheehan both participated.

At around 1:30, we were finally on the road, walking down the nice downtown street of Point Richmond, passing under the freeway, and then by a series of roads which are named after the Chevron company. Police had shut down Point Richmond streets, and the freeway offramps all morning, perhaps in excess. Given that the objective of many in the crowd to engage in civil disobedience to shut down Chevron, the mission was already halfway accomplished.

As the large group neared the east gate of Chevron, about 50 people sat down in two rows across the street. About thirty locked their arms together through large metal barrels and metal tubes, or chained themselves together at the waist. At the same time, one group did a clever street theater performance showing Chevron executives being swept away by cleaners. Two women climbed light poles to drop banners facing Chevron. The San Francisco area brass orchestra and the Santa Cruz Trash orchestra both went through a list of songs.
For the next couple hours, the police made no move to direct or remove any demonstrators. A polite communicator or liaison with the police continued to relay messages from the police, who said they didn't intend to arrest any of the locked people. Some people climbed into cars as it started to rain. As a few people filtered away to do other things, the dozens of locked down people unlocked themselves from their barrels and all walked over to climb over the barricades set up at the entrance to chevron. This event was really startling to the police who rushed over to try to block them all from doing this. The barricades were quickly removed, and the 40 pacifists were able to assemble in a seated group 40 ft further than the original line. At this point, 20 new police cars with a mix of CHP and Richmond police came. about 30 formed lines in front of the Richmond interior fence.

At this point, the tenor of the event returned to the form of the previous two hours. Most people were having fun singing, talking and eating. The police seemed unusually unagitated. Messages were carried back and forth between the captain who was dressed like soccer dad. Once, the civil disobedience group moved 10ft forward. Around 5:20 the pacifists who were seated had a discussion in a circle about what to do. They voiced concern that the connection between Chevron and the continued foreign intervention in the mideast, and the impact of Chevron's on our local community is far too important to remain off the news, while we are only delivered isolated anecdotes about gas prices rising or a soldier who killed a puppy. Many people spoke up and they took tallies of individuals willing to engaged in various alternative tactics. More than half the group felt that it was necessary to have arrests reported so that the whole protest action could be put in the newspaper. Indeed, several TV news stations had recently arrived, while only KTVU and KRON had been present at first. Later, KION46 and KPIX were seen. Someone reported that the KTVU cameraman had said that a live segment would be possible if arrests were carried out around 6pm. 15 minutes later, as the group continued to sit and mill around, the police captain seemed to be encouraging the cameraman to call his boss and tell him to put it on TV. At 5:54, an officer read a warning to stop standing near Chevron, and the arrests started several minutes after that. There were 25 arrestees in all, many of whom were very eloquently describe their position and the situation with this oil company.


Here is a great article about wartime profiteering by Chevron, written by Pratap Chatterjee
http://www.corpwatch.org/article.php?id=7989
§Singer at park before march
by cp Sunday Mar 16th, 2008 12:19 AM 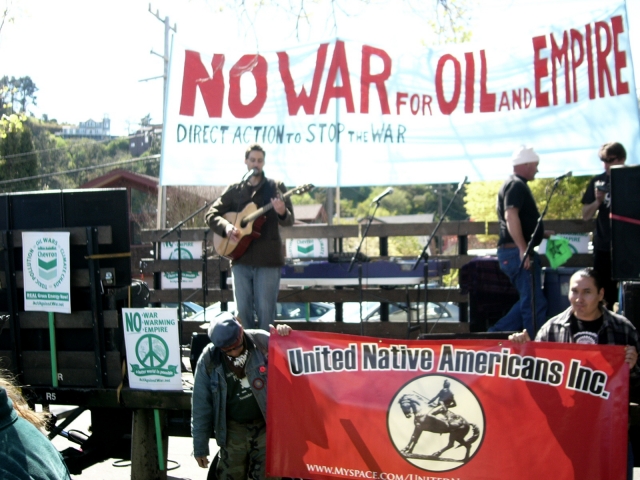 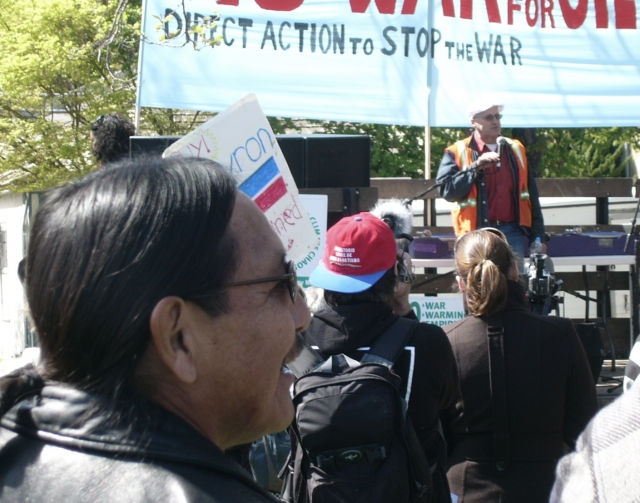 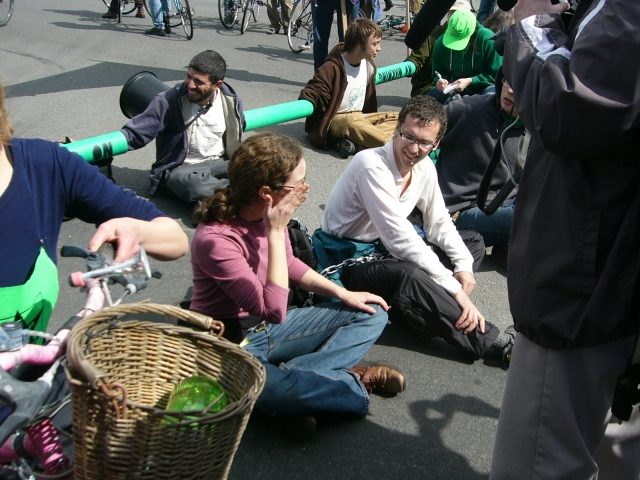 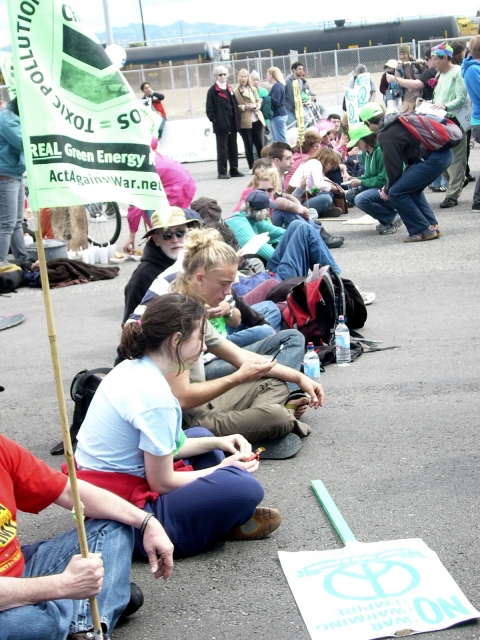 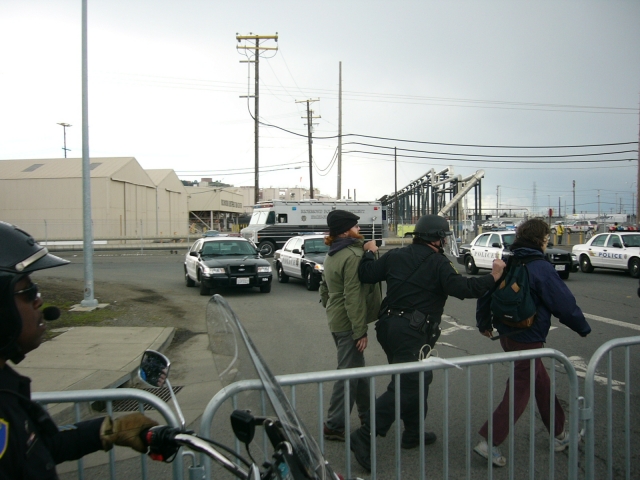 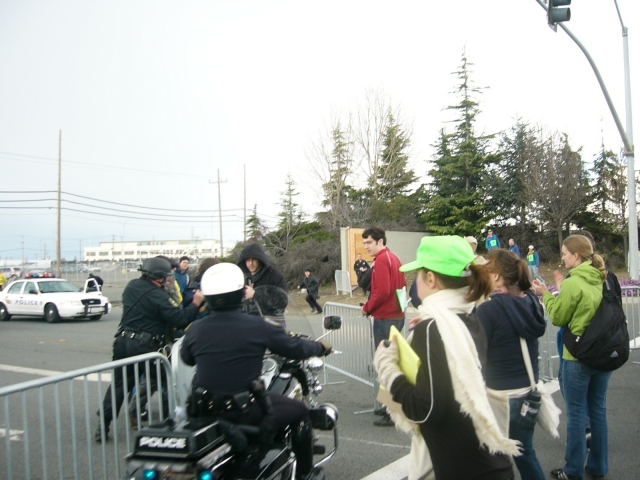 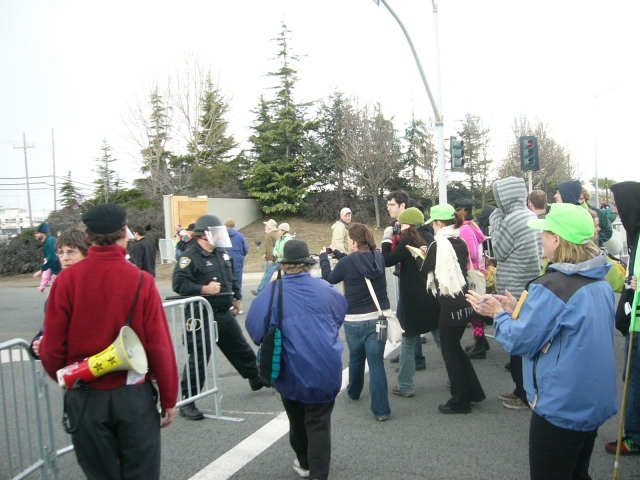 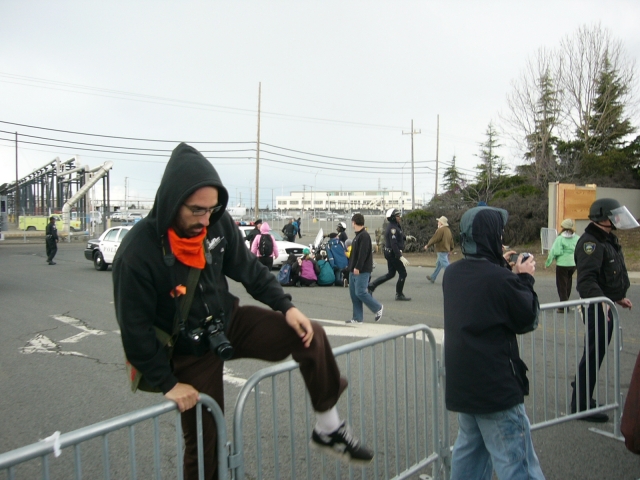 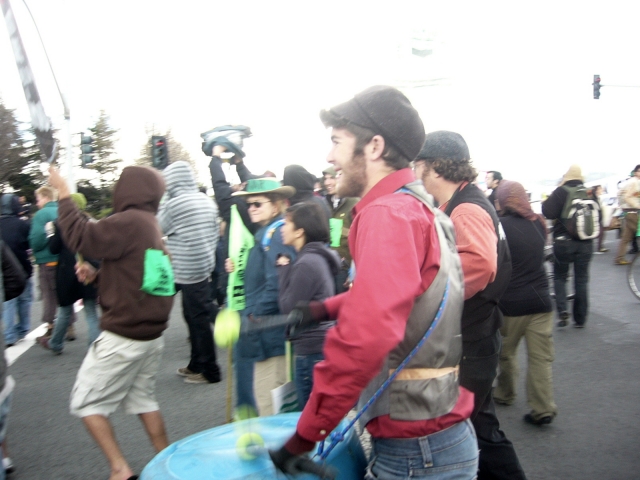 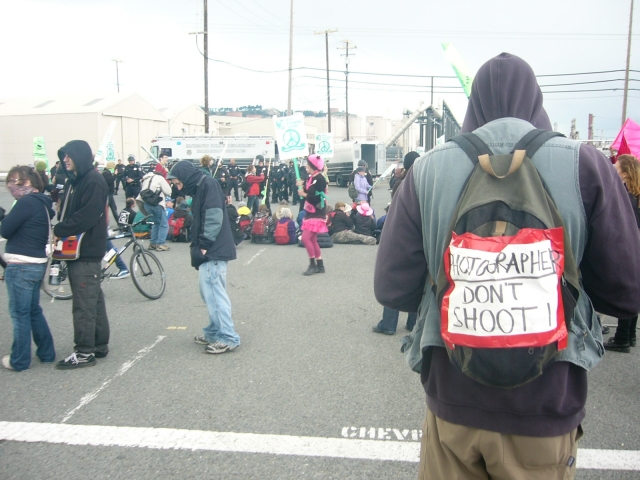 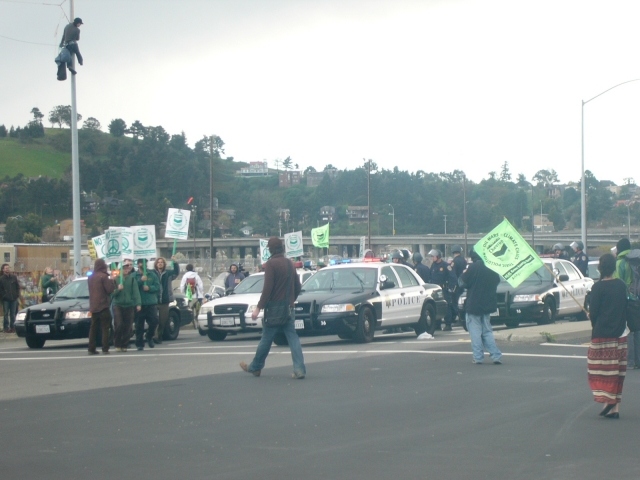 original image (1600x1200)
Several picket lines arose and did clever chants. Here, they are walking through the many police cars which showed up. It would be a good to steal something elsewhere in Richmond.
§Sitting in a formation at Chevron entrance
by cp Sunday Mar 16th, 2008 12:19 AM 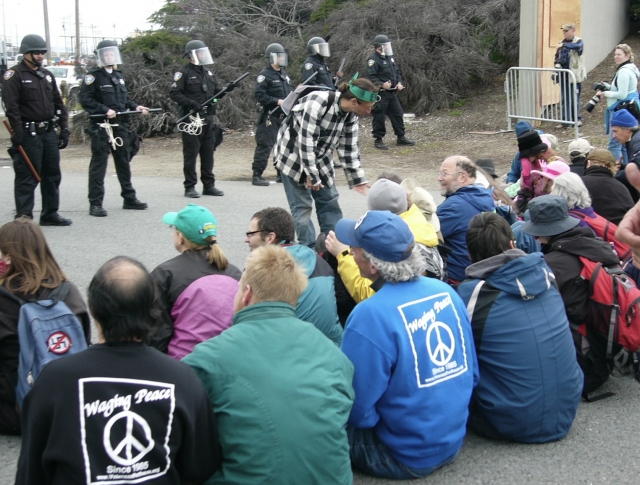 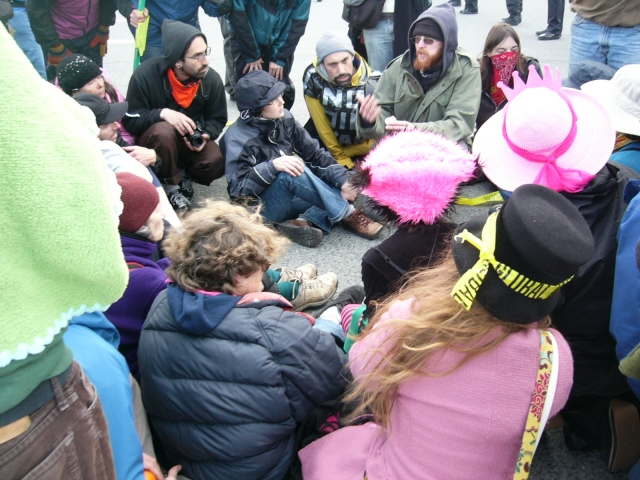 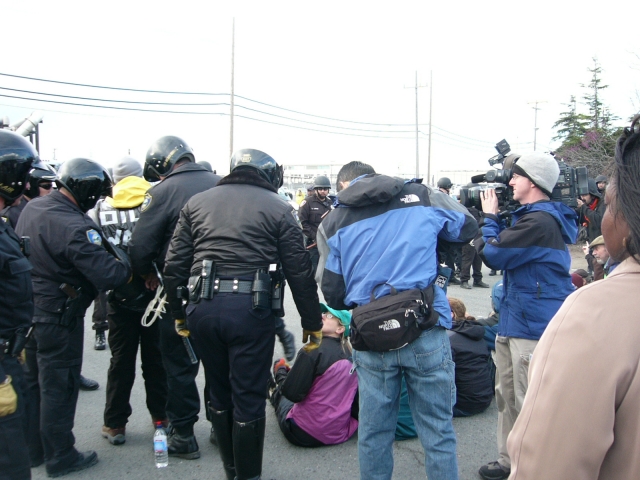 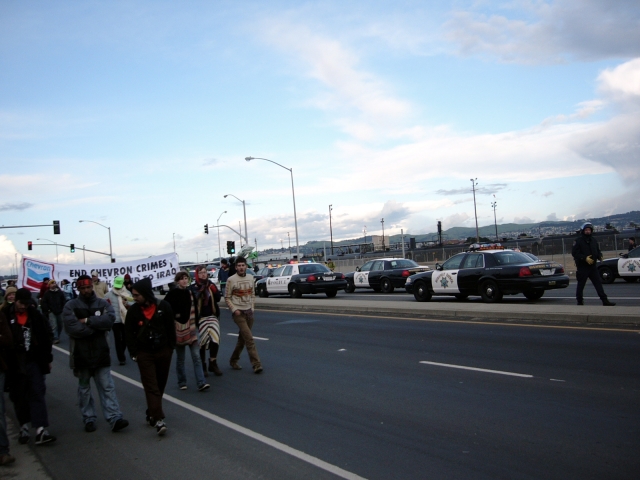