Add an Event
Newswire
Calendar
Features
Home
Donate
From the Open-Publishing Calendar
From the Open-Publishing Newswire
Indybay Feature
Publish to Newswire
Add an Event
Related Categories: East Bay | Anti-War | Environment & Forest Defense | Global Justice & Anti-Capitalism | Health, Housing & Public Services | Police State & Prisons
No War No Warming Protest at Richmond Chevron Refinery
by ~Bradley (bradley [at] riseup.net)
Monday Mar 17th, 2008 12:53 PM
Hundreds of people protested in Richmond on March 15th, 2008, to demand that Chevron stop stealing oil around the world while polluting our communities. The actions were in solidarity with the peoples, plants and animals of Ecuador, Nigeria, Burma, Iraq, Alberta and every other community exploited and poisoned by Chevron (Texaco, Unocal, etc!)
Copy the code below to embed this movie into a web page:
Download Video (50.3MB) | Embed Video
About the SlideShow: Photos by Bradley and Music, "Otro Mundo" by Manu Chao. It is 3 minutes. You can download and share, if you want ;-)
Y si no entiendes la cancion, debes que aprender español.


While hundreds of people converged on the Chevron Richmond Refinery, protests were taking place around the world against 5 years of war and occupation in Iraq, including a gathering called "Winter Soldier: Iraq and Afghanistan."

For a couple links to the G.I. resistance movement, see:

Iraq Veterans Against the War
http://ivaw.org

For actions in the Bay Area, resources and more, check: 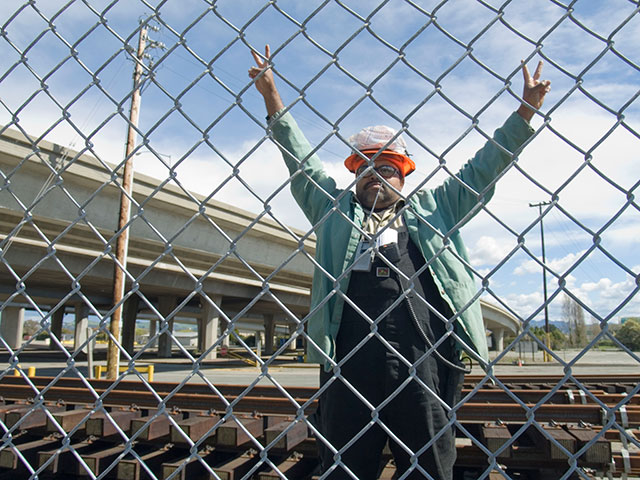 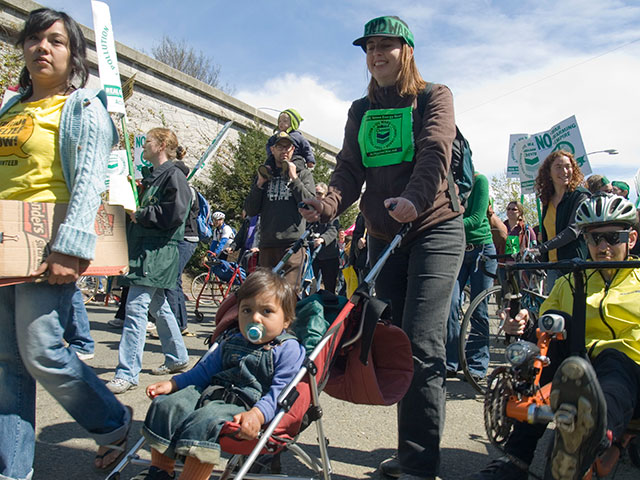 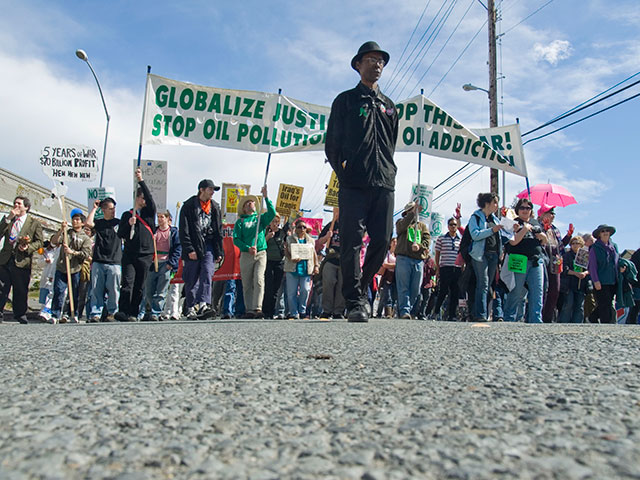 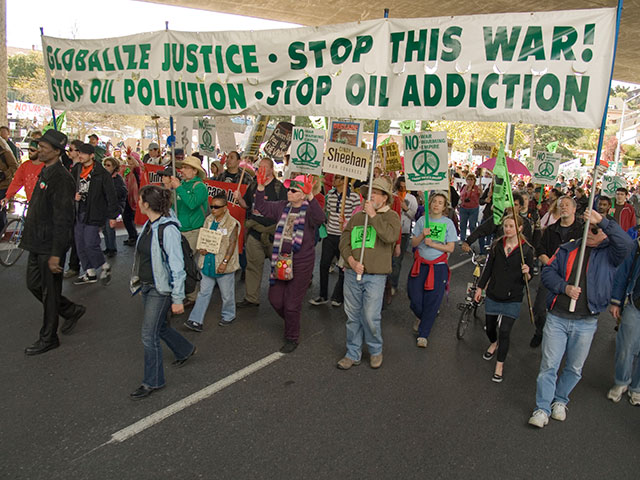 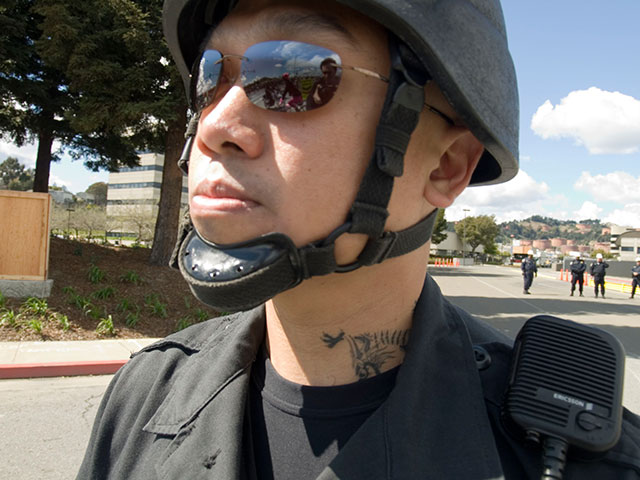 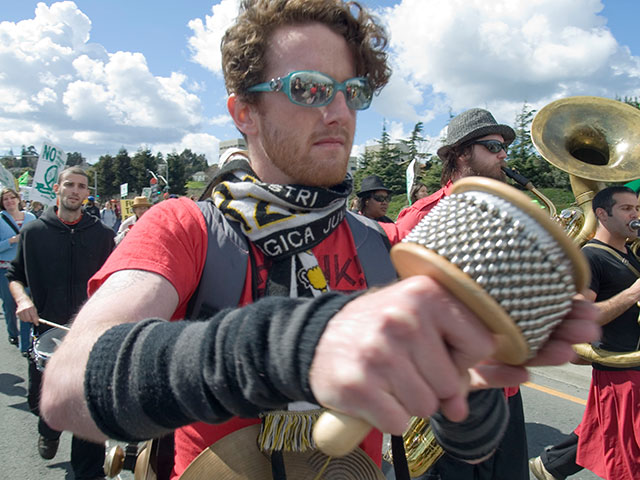 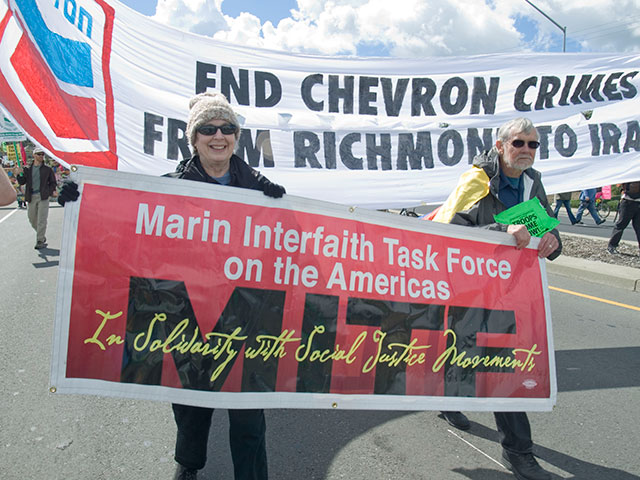 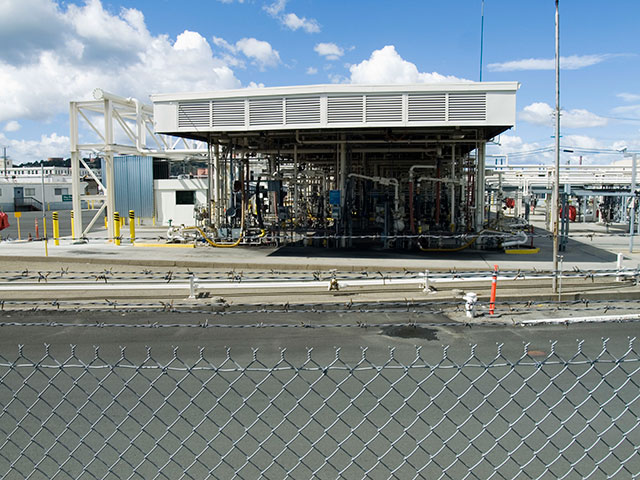 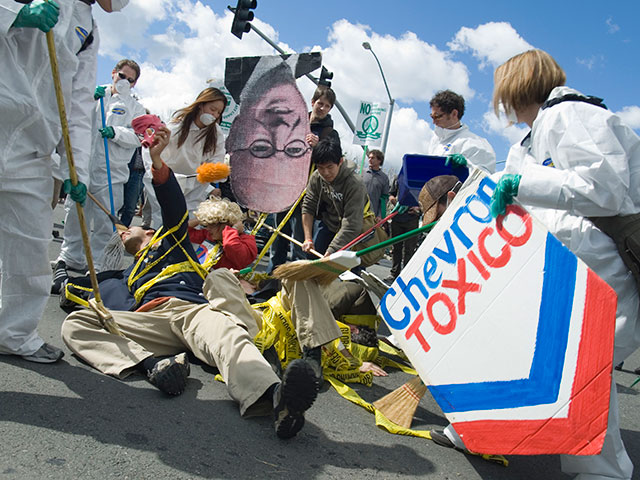 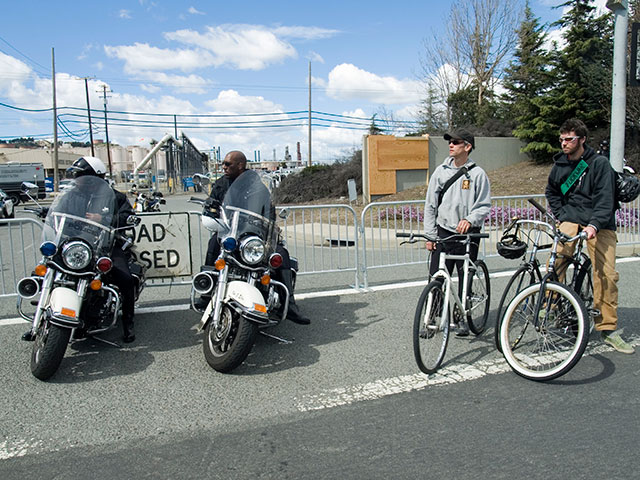 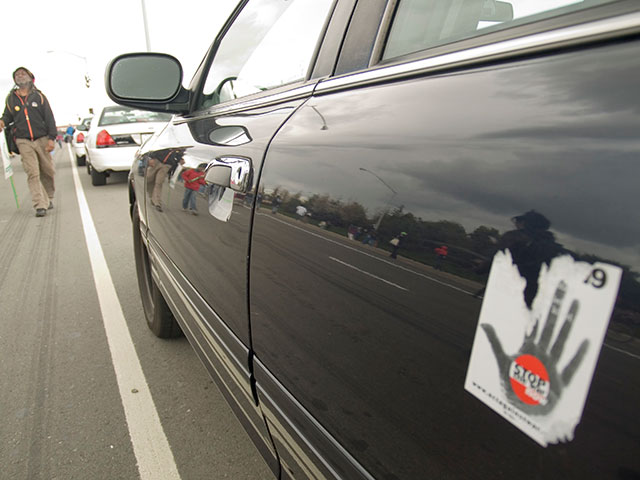 Protests During 5th Anniversary of US Bombing and Invasion of Iraq
March 19th, 2008 marks the five-year anniversary of the beginning of the US war and occupation of Iraq. Events will be held all over the United States to observe and protest the ongoing war and its environmental, societal, and financial tolls. The Iraq war is the second longest in U.S. history. It has killed more than one million Iraqis and 4,000 U.S. troops. The cost of the war is now running at more than $400 million per day, nearly $5,000 per second.
http://www.indybay.org/newsitems/2008/03/13/18485445.php
§Communities for a Better Environment
by ~Bradley Monday Mar 17th, 2008 12:53 PM 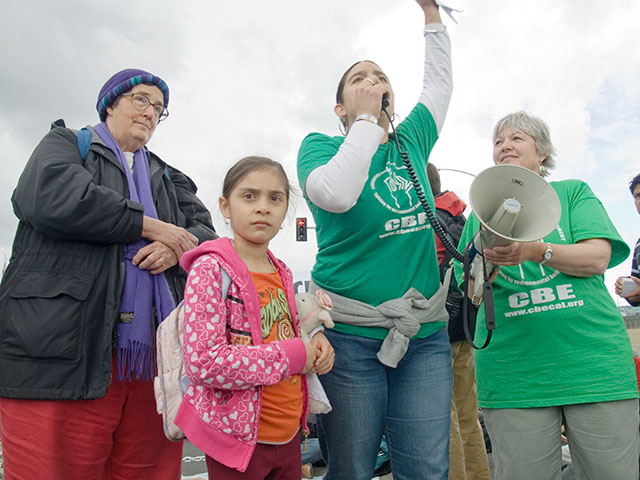 Communities for a Better Environment (CBE) is a social justice organization with a focus on environmental health and justice.
http://www.cbecal.org
§Castro St.
by ~Bradley Monday Mar 17th, 2008 12:53 PM 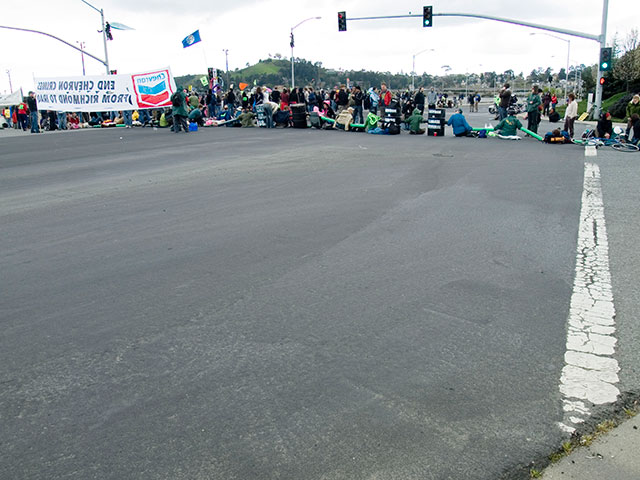 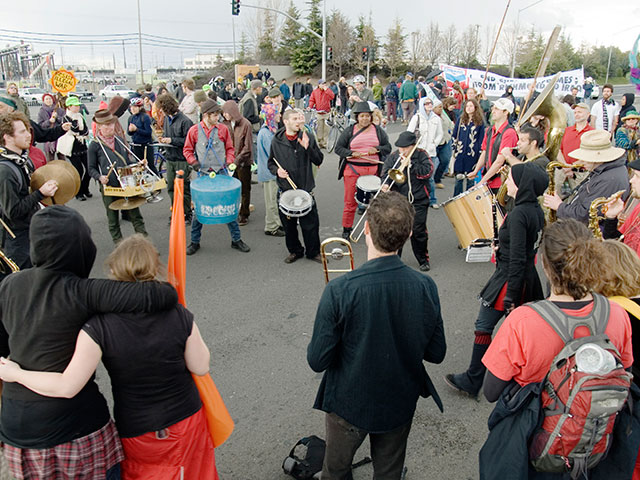 The three tankers in the background say something to the effect of 'Chevron: Finding a Cure for Cancer' with a pink ribbon painted as well. On the right, police stand in front of Chevron's boarded-up logo.
§Richmond Officer J. Hill Acted Aggressively
by ~Bradley Monday Mar 17th, 2008 12:53 PM 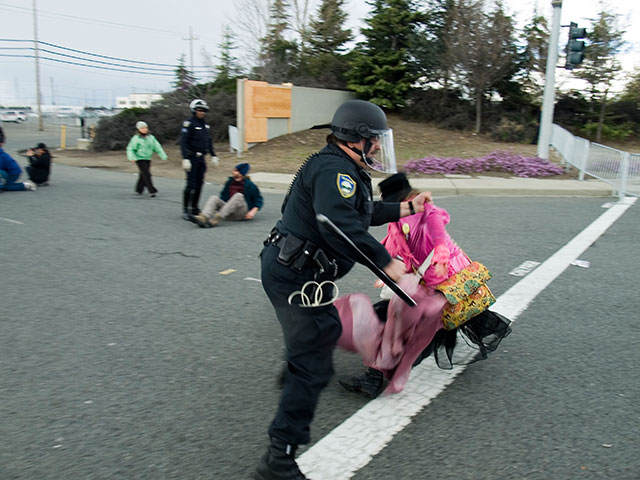 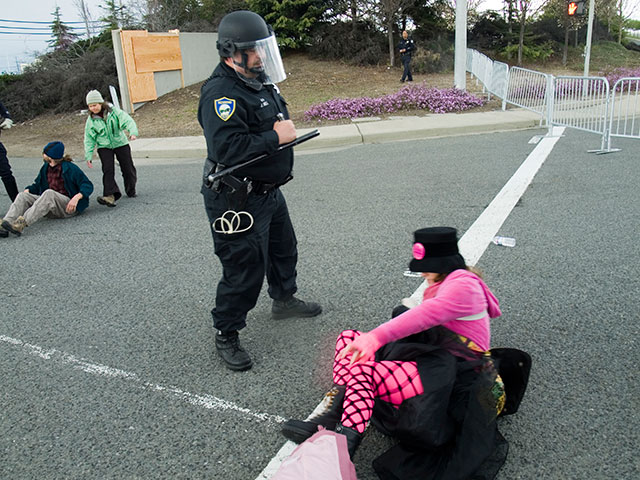 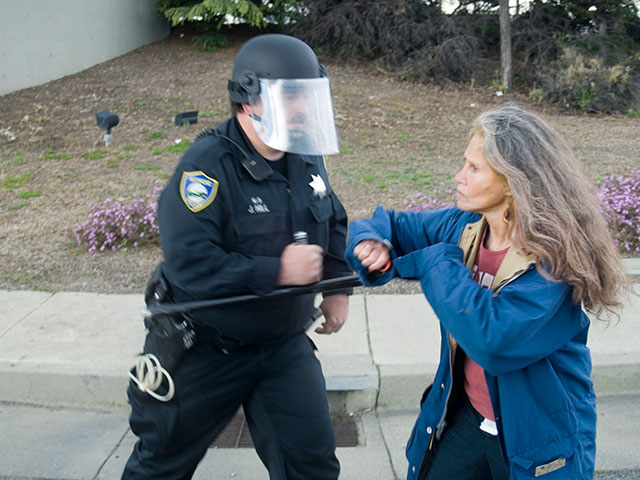 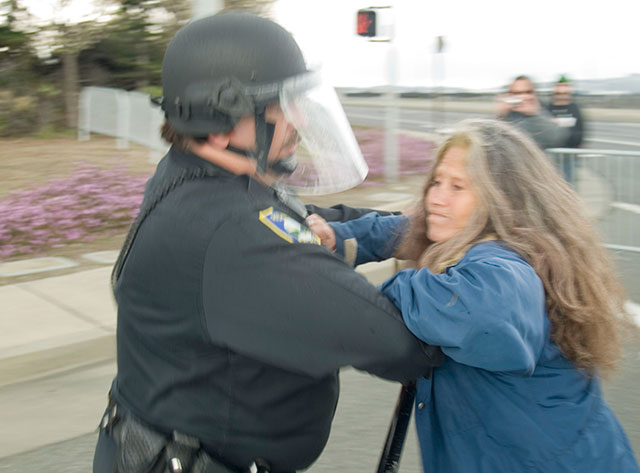 *NOTE. A link will be posted below to more photos. 32 of the 60 photos from the slideshow (at the top of this post) will be published on Indybay. Other folks have already published very nice photos, so please check those out here:
http://www.indybay.org/newsitems/2008/03/14/18485681.php
§MORE PHOTOS
by ~Bradley (bradley [at] riseup.net) Monday Mar 17th, 2008 2:23 PM
Hundreds Protest Pollution, War and Global Warming at Chevron in Richmond
http://www.indybay.org/newsitems/2008/03/17/18486366.php
Add Your Comments
LATEST COMMENTS ABOUT THIS ARTICLE
Listed below are the latest comments about this post.
These comments are submitted anonymously by website visitors.