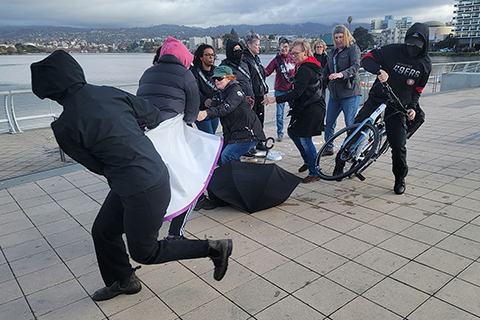 On December 5, several anti-trans TERF groups staged a rally on the steps of the René C. Davidson courthouse in Oakland. "TERF" stands for Trans Exclusionary Radical Feminist. These groups co-opt the leftist rhetoric of "liberation," yet they align with white nationalists to criminalize and further marginalize trans-gender folks. Kara Dansky, one of their leaders who organized the event, regularly appears on Fox News' Tucker Carlson show to promote transphobia.

Not a single person showed up to support their cause. After four of them took turns reading short scripts on the courthouse steps, they walked over to Lake Merritt. At that point, trans-rights activists ran up and shouted, "Get out of Oakland!" Both of the TERF banners were snatched away from them, while they were served cream pies and eggs. A communiqué posted on Indybay later showed the banners being set on fire.

Report Back from Anti-TERF Action in Oakland: Eco-Fascists and Transphobes GTFO |

TERFs Have Problems at Oakland Courthouse |

TERFs Out of Oakland! |