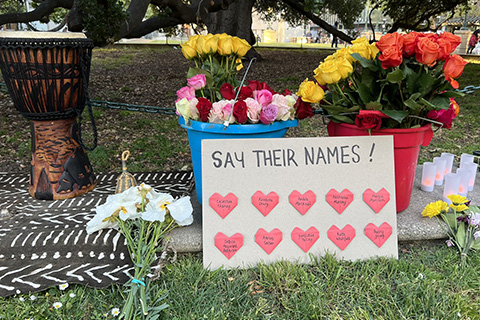 Outrage across the country swelled after two of the latest mass casualty shootings, one at a grocery store in Buffalo, New York, and another at an elementary school in Uvalde, Texas. Ten were killed in Buffalo, mostly African American elders, and twenty-one in Uvalde, nineteen small children and two teachers. Both shooters were only 18 years old when they bought the assault-style weapons used in the attacks, too young to legally buy beer. On June 11, at least 10 Bay Area cities will protest on a national day of action against gun violence.

In the wake of the attack carried out by a white supremacist in Buffalo on May 14, the Anti Police-Terror Project and others rapidly organized a solidarity vigil in Oakland. The Buffalo shooter revealed in a manifesto that he was motivated by the racist “great replacement" theory, which claims Democrats and a global Jewish cabal are deliberately diluting the European American electorate by importing immigrants of color. He drove hundreds of miles to target a predominantly Black neighborhood, despite that fact that African Americans have lived in the U.S. since well before it was a country.

After Uvalde and Texas law enforcement officials repeatedly held back facts about the timeline and their response, changing their stories in the days following the shooting, questions have grown louder as to why officers took over an hour to directly confront the shooter, even though scores of armed police officers were on the scene, inside and surrounding the school.

Criticism Mounts over Slow Police Response to Uvalde School Shooting | The Gun Lobby, NRA and the Republicans Must Be Held Responsible for Gun Violence

Solidarity With Buffalo from Oakland, California — A Vigil & Healing Circle (May 18)