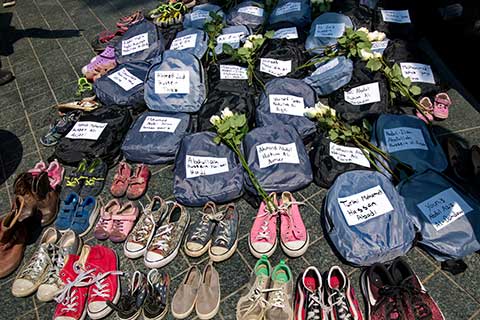 Members of the Yemeni-American community and world peace activists grieved on the third anniversary of the loss of 40 innocent children whose lives were taken by a 500 pound US-made, Saudi and United Arab Emirates-led bomb. On August 8 at Union Square in San Francisco, demonstrators laid down 40 pairs of shoes and 40 backpacks to memorialize each life.

Speakers at the rally co-hosted by the Yemini Alliance Committee (YAC) said that the US government is complicit in the devastation to life and land in Yemen as it continues to arm Saudi Arabia and the UAE. The bombs were US made by General Dynamics and Lockheed Martin.

Year after year, the crisis in Yemen worsens. Commenting on the deaths of the children, YAC wrote: "Can you imagine sending your children off to school on a bus, for them to only be returned in body bags? Those culprits have never been held accountable. When will human life be more important than profits?"

Grieving the Loss of Yemeni Children — US Complicit |

Related Feature: Call for US to End Support of Saudi-Led War