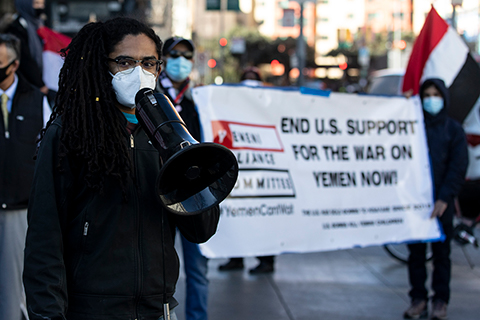 The UN has repeatedly called Yemen the biggest humanitarian crisis in the world, and people around the world reacted on January 25. In-person protests took place in U.S. cities including San Francisco. The former leader of the UK's Labour Party, Jeremy Corbyn, and academic Cornel West addressed an international online rally. Activists called on President Biden to honor his campaign promise and end the war by ending US support for the Saudi-led coalition fighting in Yemen.

Jeremy Corbyn said that the humanitarian disaster of “cholera, of covid, of hunger, of poverty, of the bombing of schools and hospitals, of the loss of so many children’s lives, and the pollution that the detritus war will leave for decades to come, is entirely of human activity and massive arms sales to Saudi Arabia and other countries in the region that have taken part in this war.” Dr. West vowed that Yemeni’s humanity will never be rendered invisible.

In San Francisco, speakers addressed the horrors of the war, saying that the conflict has been unbelievably under-reported in the press. The civil war in Yemen began in 2014, and foreign intervention began shortly after when Obama began selling bombs to the Kingdom of Saudi Arabia and the United Arab Emirates. "It's been almost 6 years since the US has been fueling the war on Yemen; the attacks are relentless," said one speaker to a crowd of peace activists in front of the Federal Building. Around the world more than 385 organizations across 25 countries took part in the day of action.

As World Demands Peace and Aid for Yemen, Biden Told to 'End Every Aspect of This War'