Add an Event
Newswire
Calendar
Features
Home
Donate
From the Open-Publishing Calendar
From the Open-Publishing Newswire
Indybay Feature
Related Categories: International | San Francisco | U.S. | Anti-War
Large "No War on Yemen" Car Caravan and Rallies in San Francisco
by R.R.
Friday Jan 29th, 2021 3:45 AM
Joining in a worldwide week of action, on January 25 activists in San Francisco demonstrated for an immediate halt to the U.S.-backed Saudi coalition's attack on Yemen. 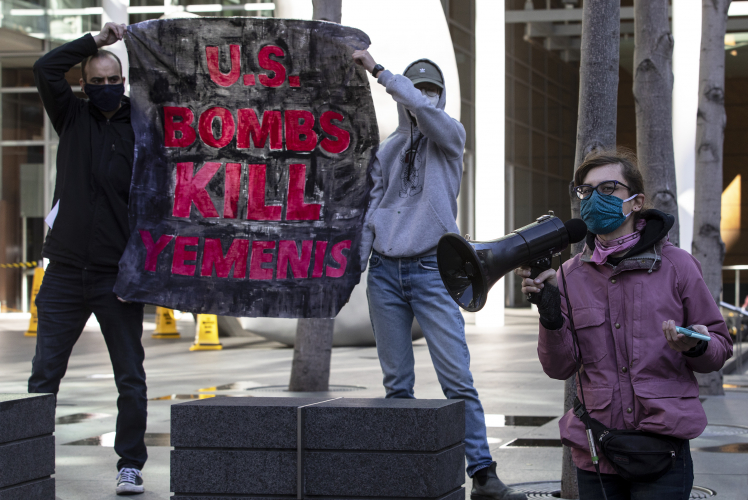 
On January 25, demonstrators in San Francisco held an action that included rallies at BlackRock corporation and the Federal Building. There was, in addition, a caravan of close to 100 banner festooned cars that wound their way through the city, honking to draw attention to the issue and with shouts of “No War on Yemen” through bullhorns.

Cynthia Papermaster of CodePink spoke at BlackRock which was chosen as a site for protest because it promotes investing in companies that sell weapons used in war and conflict around the world. BlackRock CEO Larry Fink continues business relations with the Saudi Crown Prince, who is responsible for leading the war on Yemen. Ms. Papermaster spoke of CodePink’s campaigns to get Congressmembers to support House Jt. Resolutions 15 and 16 to block weapons sales to Saudi Arabia. She said that CodePink supports a reversal of the designation of the Houthis as terrorists.

A second, longer rally at the Federal Building featured many speakers including Yemeni American activist Izzaddeen Homran who said to audience cheers, “We are out here for Yemen, but let's not forget we are here for Syria, Palestine, Iraq, Afghanistan and all the other countries that are being bombed.” He noted that participants in the protest were people from different races, cultures, and countries who all know that "what’s going on in Yemen is wrong.'

Others addressed the horrors of the war, saying that the conflict has been unbelievably under-reported in the press. The civil war in Yemen began in 2014 and foreign intervention began shortly after when Obama began selling bombs to the Kingdom of Saudi Arabia and the United Arab Emirates. "It's been almost 6 years since the US has been fueling the war on Yemen; the attacks are relentless" said one speaker.

The event was hosted by the Yemeni Alliance Committee, AROC: Arab Resource and Organizing Center, Yemeni Freedom Council, and the East Bay and San Francisco chapters of Democratic Socialists of America, amongst others.
https://www.facebook.com/YACofCalifornia/
§Huddling in the chilly air
by R.R.
Friday Jan 29th, 2021 3:45 AM 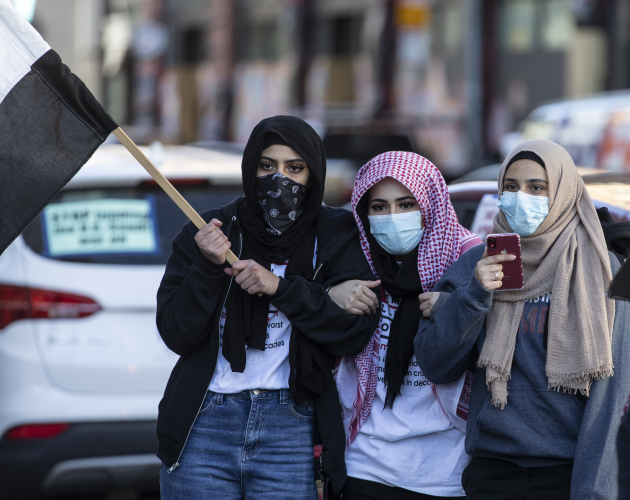 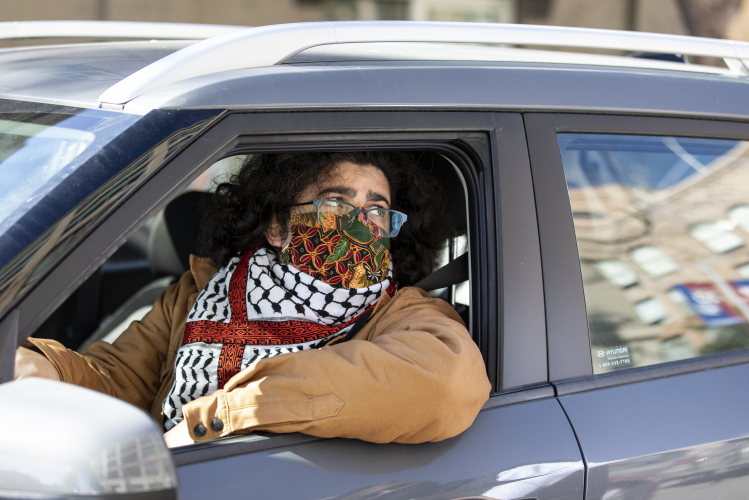 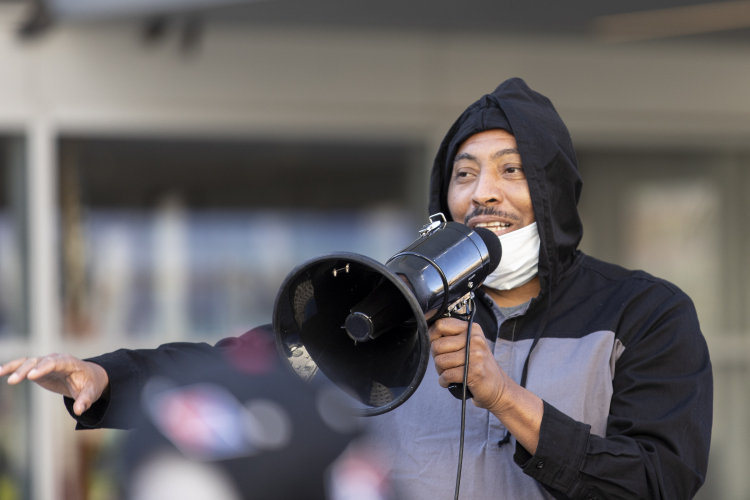 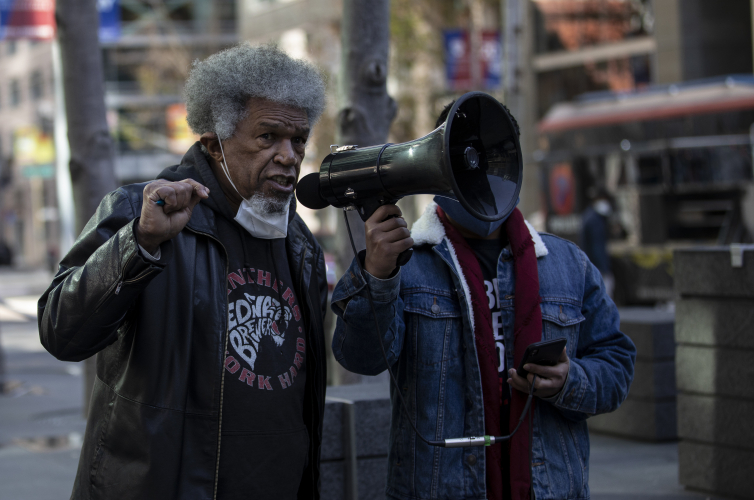 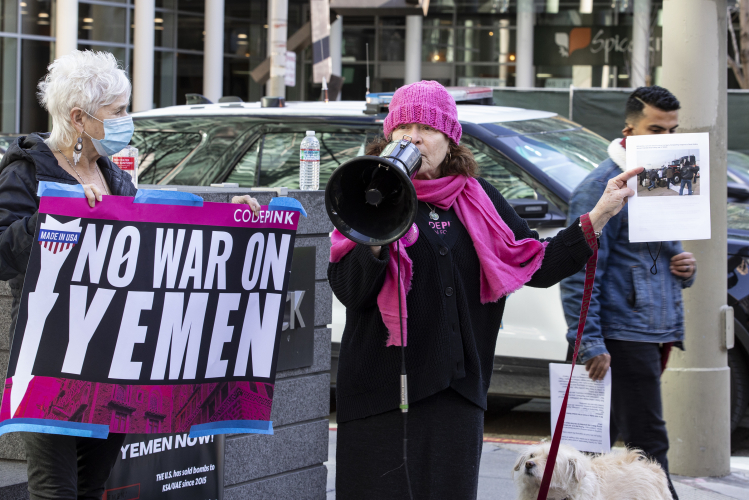 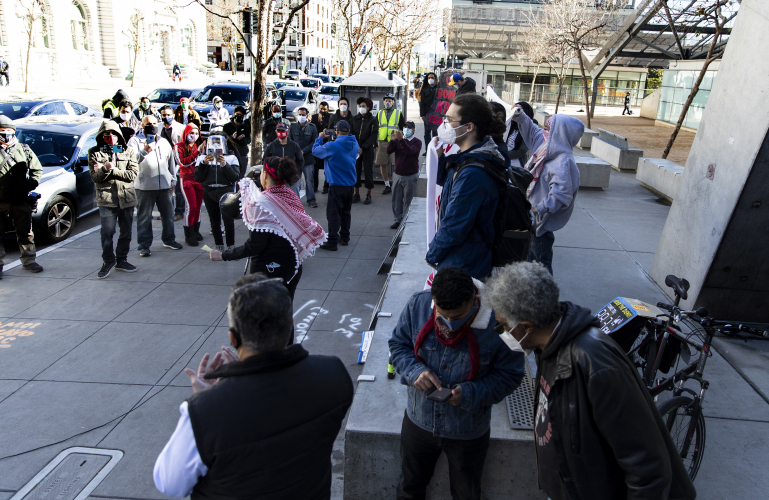 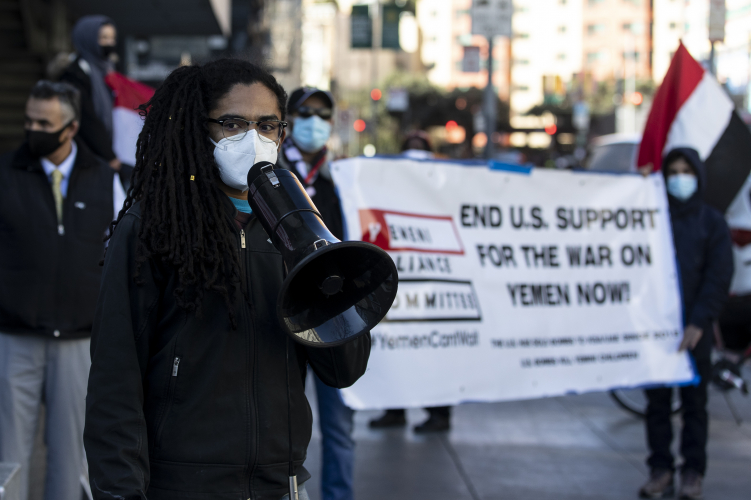 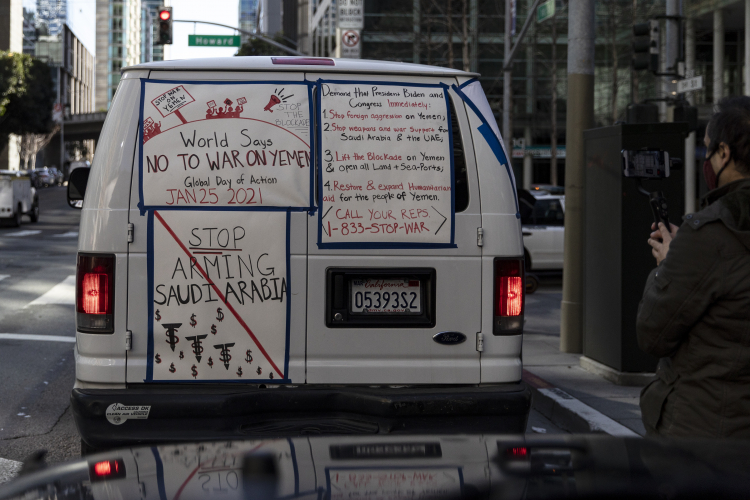 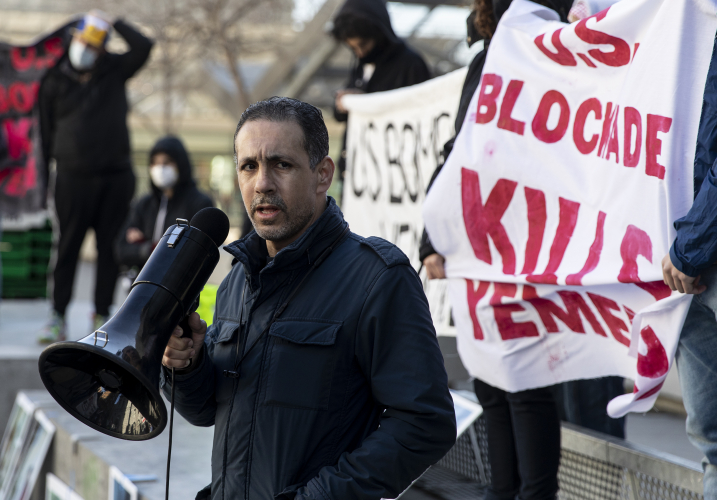 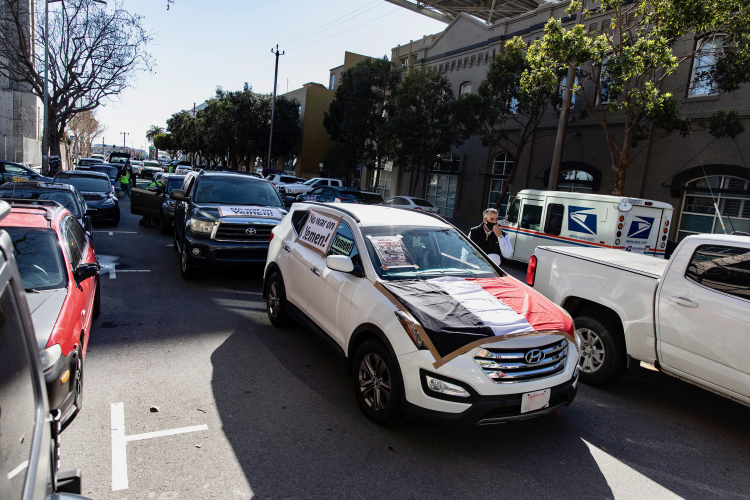 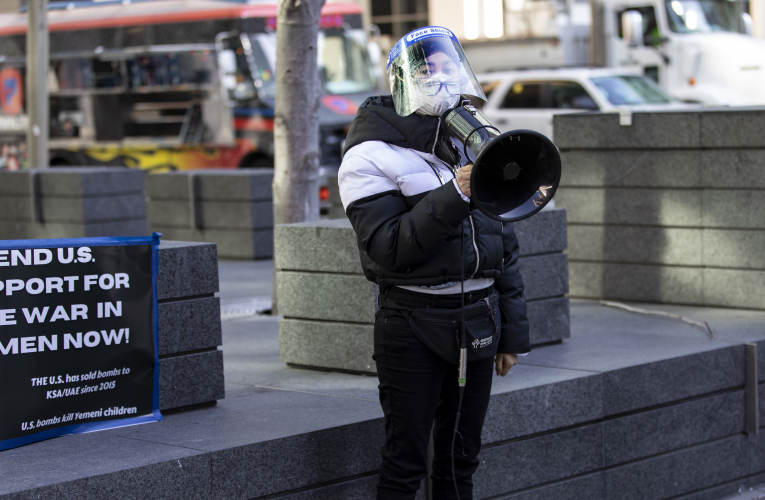 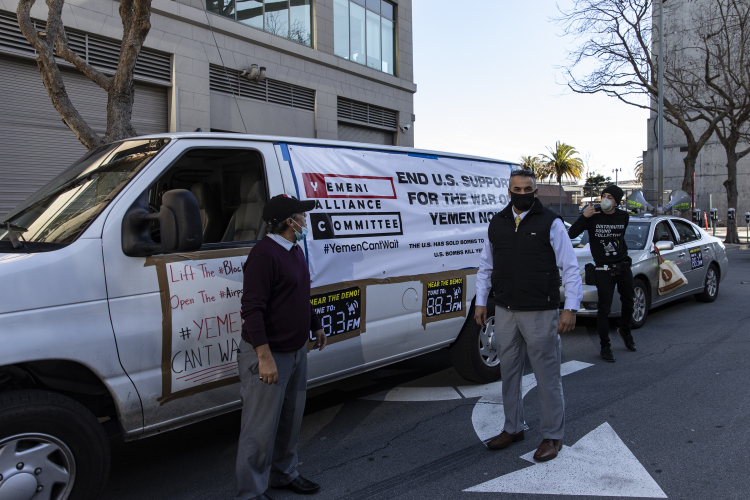 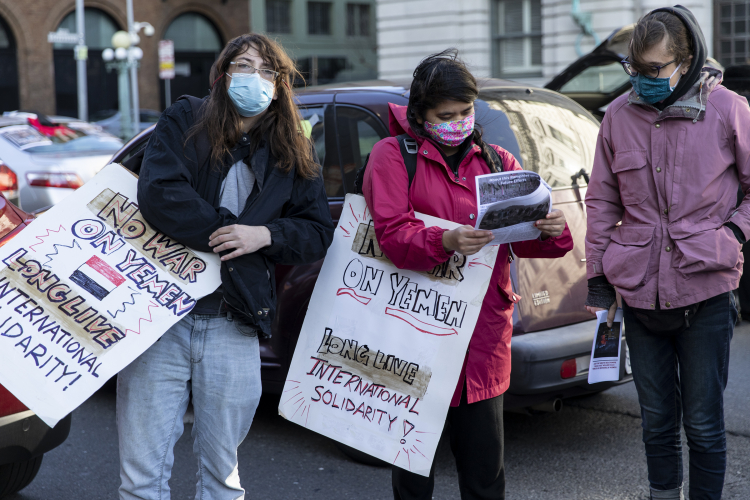 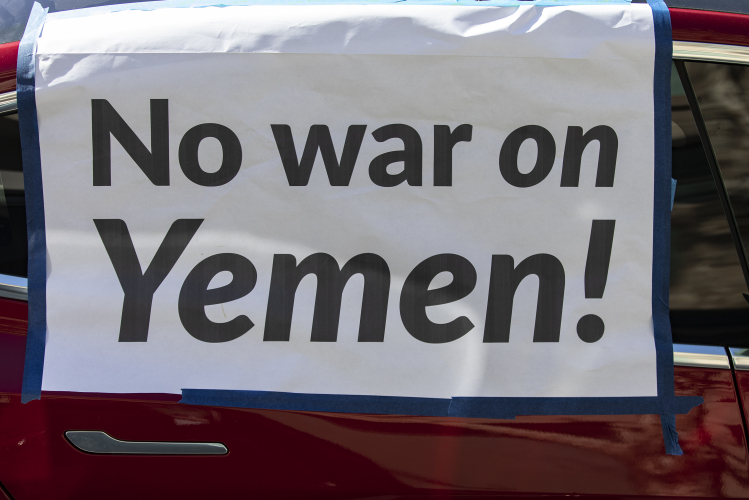 original image (3150x2102)
https://www.facebook.com/YACofCalifornia/
Add Your Comments
Support Independent Media
We are 100% volunteer and depend on your participation to sustain our efforts!