Add an Event
Newswire
Calendar
Features
Home
Donate
From the Open-Publishing Calendar
From the Open-Publishing Newswire
Indybay Feature
Related Categories: International | U.S. | Anti-War
As World Demands Peace and Aid for Yemen, Biden Told to 'End Every Aspect of This War'
by Jon Queally
Thursday Jan 28th, 2021 10:32 PM
Over 385 groups from across the globe are calling for an immediate halt to the U.S.-backed Saudi coalition's relentless attack—an armed conflict that is only intensifying the world's worst humanitarian catastrophe. 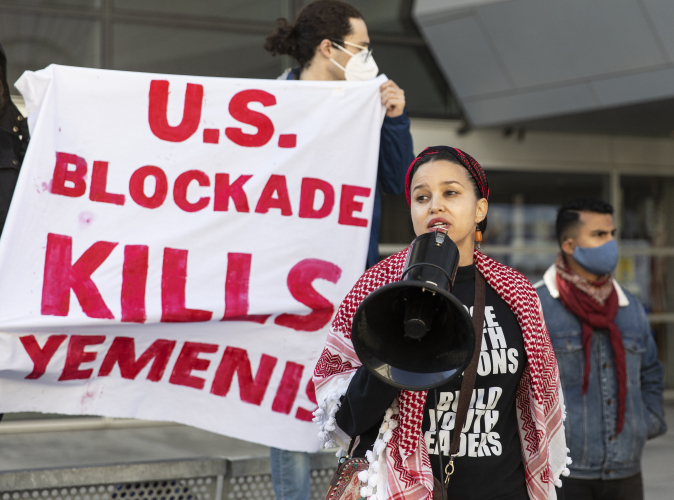 original image (3000x2224)
Campaigners worldwide this week are calling for an immediate end to the war in Yemen, including elevated calls for the governments of the United States, the United Kingdom, and Canada to end their support of the assault led by Saudi Arabia and the United Arab Emirates that is only exacerbating a famine while also making the Covid-19 pandemic a larger and larger threat.

Led by several convening anti-war organizations—the Yemeni Alliance Committee, Action Corps, CodePink, and Stop the War U.K.—over 385 groups from around the world came together with a joint call Monday to end the war and on-the-ground demonstrations took place in approximately 30 countries.

Speaking from the U.S., Congressman Khanna said that what's happening in Yemen "is the greatest humanitarian crisis in the world" and now, with former President Donald Trump gone and both chambers of Congress back in the control of the Democrats, he would—along with Sen. Bernie Sanders (I-Vt.)—be re-introducing a War Power Resolution to end U.S. complicity and involvement in the Saudi-led attack.

In addition to ending any U.S. logistical support to the Saudis, Khanna said he would continue to push for an end to the crushing blockade that has prevented supplies of life-saving food and medicine from reaching those in need and also called for the Saudi kingdom to pay reparations for the harms and damage they have inflicted. Based on conversations he has already had with President Joe Biden's incoming national security team, including Secretary of State nominee Antony Blinken and National Security Advisor Jake Sullivan, Khanna said he remains "confident" the new administration is committed to ending the war.

Corbyn, in his remarks, announced that he had introduced what's called an Early Day Motion in the U.K. Parliament opposing the government's ongoing support for the war.

Al-Adeimi, assistant professor of education at Michigan State University, thanked the international coalition speaking out against the war that has too often been "not forgotten, but ignored" by the world community and targeted her remarks directly at the new U.S. president.

"I call on President Biden to end every aspect of this war," Al-Adeimi said. "One day, Yemenis will have a chance to pick up the pieces and chart their own course, free of international meddling and intervention."

"One day," she said, "bombs won't be dropped on innocent people in our name, and those who profited from this war will be held accountable. Until that day, I call on everyone listening and watching to continue fighting for the sake of 30 million Yemenis—no matter how long it takes, no matter how lonely it gets, and no matter how difficult it is, because Yemen matters—and Yemen can't wait."
https://www.commondreams.org/news/2021/01/...
Add Your Comments
Support Independent Media
We are 100% volunteer and depend on your participation to sustain our efforts!