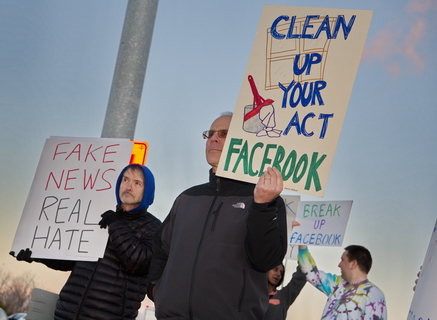 Critics say that Facebook is leading its 2.7 billion users down a dark road into an information environment filled with dishonest propaganda. On January 9, activists demonstrated both outside and on the property of Facebook headquarters in Menlo Park, California. The words "Fake News Real Hate" and other slogans were projected on to Facebook's giant thumbs up "like" sign to call out the platform's political ad policy, which allows for paid advertisers to deceive the public. The company reiterated its policy in a press release the same morning, announcing, "In the absence of regulation, Facebook and other companies are left to design their own policies."

Activists believe that misinformation on Facebook played at least some role in Trump's surprise win in 2016, and that the social media giant contributed to the spread of toxic hate that has created a climate of fear for immigrants, suppressed voter turnout among African Americans, and threatens the upcoming US census count. Organizer Andrea Buffa, addressing the late afternoon rally at the company headquarters said, "Facebook is actually facilitating bad actors putting out disinformation, putting out divisiveness that can jeopardize our election."

Ted Lewis of Global Exchange said, "If you're a paid political advertiser on Facebook, you can go ahead and lie. We think they should just forego political advertising in this election cycle." Speaking on behalf of a coalition of activists, Buffa announced that future actions are planned against "this huge social media company in our back yard."